The Uruguay flag is one of the oldest flags of South America. Uruguay, officially the Eastern Republic of Uruguay, was a Spanish colony until 1811.

The Uruguayan flag was recognized on July 11, 1830. This flag is the national flag and national emblem and is one of the three national flags of Uruguay.

History of the Uruguayan flag

Explaining the history of the Uruguayan flag, it should be noted that the country’s flag has been influenced by the Spanish Empire and South American culture in the past.

During these years, the Uruguayan flag was in the form of green and white horizontal stripes with the address in the middle of the flag.

This flag was considered the flag of the state of Cisplatina and one of the states of Brazil.

The flag of Uruguay from 1825 to 1828 consisted of three stripes of blue, white and red.

From 1828 to 1830, the Uruguayan flag made of a large number of blue horizontal lines with a golden sun symbol in the upper left corner of the flag on a white background.

During the Great Siege of Montevideo from 1843 to 1851, Uruguay had two parallel states with two different flags.

The difference between the two flags is in the golden sun symbol and the color of the light blue and bright stripes on the white background of the flag. The two flags belonged to the Defense and Cerrito governments in Montevideo.

Regarding the colors and meaning of the Uruguayan flag, it should be said that the flag consists of white and blue colors with the golden sun symbol in the upper left corner of the flag.

For the first time on December 16, 1828, the flag consisted of 19 white and blue horizontal stripes.

Then, on July 11, 1830, the current flag, consisting of nine white and blue horizontal stripes, designed by Joaquín Suárez, was recognized.

The horizontal lines of the flag represent the first nine states of Uruguay. This flag, consisting of the American flag, which is recognized by 13 states, consists of 9 horizontal stripes.

The emblem of the sun represents the sun god in the Inca religion of South America. This emblem is also seen in the flags of other South American countries such as Argentina and Bolivia.

Uruguay has three official flags. The other two flags of the country are the Flag of Artigas and the Flag of the Treinta y Tres.

The original Uruguayan flag is the same flag with 9 horizontal white and blue stripes with the sun emblem.

The sun is also the national emblem of Argentina and can be seen in the middle of the flag of that country.

Facts about the Uruguayan flag

The Republic of Uruguay

Uruguay is a country in southeastern South America, with the capital of Montevideo. Uruguay has a population of 3,474,000, of which 1.8 million live in the metropolitan area of the capital.

The official language of the country is Spanish and its currency is the Uruguayan peso. About 58% of the population is Christian and about 41% is atheist.

About 86% of Uruguayans are white. Most of the people of this country are of Spanish and Italian descent (one-quarter of the population is Italian).

The Portuguese discovered Uruguay first in the 17th century and the city of Cologne in 1680.

In the following years, the Spanish also entered this country. The Spaniards founded the city of Montevideo in the early 18th century.

In the 17th and 18th centuries, wars over Spanish ownership took place between Spain and Portugal, which led to Spain’s victory.

In 1820, Brazil occupied the land and made it one of its states until a general revolution broke out between 1825 and 1828.

On August 25, 1825, a man named Juan Antonio Lavalia led a popular uprising for independence (now Uruguay’s national holiday), which led to full independence from Brazil in 1828.

Uruguay began to develop economically, politically, and culturally, mainly in the early 20th century, until what was Latin America Switzerland until the 1950s.

But at the same time as developments in other countries in the region and military coups in this small country, military rule between 1973 and 1985 disrupted the institutionalized process of democracy. But since 1985, democratic governments have re-emerged.

Uruguay has a population of 3.5 million.

The state and the church are formally separate. The majority of Uruguayans believe in the religion of the Roman Catholic Church (66%), a small number of Protestants (2%) and Jews and Armenian Christians (1%), and many unbelievers (31%).

The literacy rate in Uruguay is very high (99%) and the urban middle class makes up the majority of the country where income is well distributed among the people.

Montevideo is one of the most beautiful capitals in the region, and the city of 3.1 million people, the majority of whom are Europeans, is the cradle of South American culture.

Although the country’s twentieth-century history has seen dictatorships, violence, corruption, and economic crises, Uruguay has been a shining example of a brilliant economic and cultural paradigm for the past 25 years.

According to some experts, the economic growth trend of the Argentina River plate has been completely opposite to the economic boom in Uruguay.

It is the second smallest independent country in South America and is only larger than Suriname. (Larger than French Guiana, which is not yet independent).

4 thoughts on “Flag of the Republic of Uruguay”

Flag of the Republic of Zimbabwe

Sun Sep 20 , 2020
The current Zimbabwe flag was adopted on April 18, 1980. The flag, which has a 1: 2 ratio, is made of 7 horizontal stripes in pan-African colors of green, yellow, red, and black, plus a white triangle with a 5-pointed red star with a Zimbabwean bird on it. The official […] 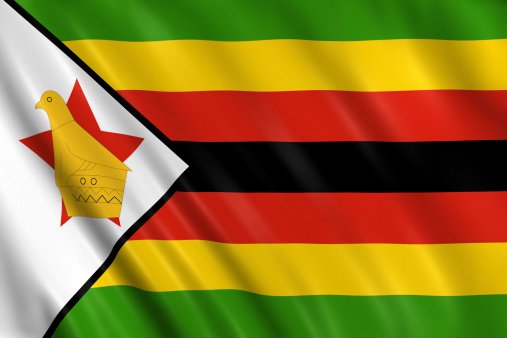