The Turkish flag consists of a moon and a star on a red background, which is the symbol of Islam, and this flag also used in Asia Minor. During the Ottoman Empire, the star had an octagonal flag, which became an octagonal star after the collapse of the Ottoman Empire. The role and color of the current Turkish flag were chosen on June 5, 1936. It is 3 meters long and 2 meters wide.

The moon is on the left and the star is in the middle of the moon’s fork, on the right. That is why the Turkish flag is called the star moon (i Yoldoz).

People believe that there is no red flag background unless the blood of the people of that country is shed somewhere.

As the blood of the Turkish people was shed in the war between Greece and Turkey in 1920-1922. According to the Turkish people, the moon in the flag refers to the Prophet Muhammad (PBUH) and its five stars refer to the five pillars of religion.

The national anthem of this country is Esteghlal, which composed by Mohammad Akef.

Countries that have the moon and star symbol on their flags include the Republic of Azerbaijan, Uzbekistan, Algeria, Pakistan, Turkey, Turkmenistan, Tunisia, Singapore, Malaysia, Mauritania, and Libya.

There are various theories about the history of the Turkish flag. Some believe that the crescent moon is an Islamic symbol. The crescent and the star are also historical symbols of the Ottoman Empire.

Another theory is that the crescent moon originated in Central Asia and the people of Siberia, who worshiped the sun, moon, and sky.

Hence, it is difficult for historians to distinguish between facts and myths when it comes to him. One of the stories about the Turkish flag and the symbols on it goes back to Osman I.

This legend states that one night Uthman had a dream in which the moon came out of the breasts of a holy man and fell into the hands of Uthman. A tree sprouted from his belly and its shadow covered the whole world.

When the Ottomans decided to choose a flag for themselves, in which an eight-pointed star and a moon were seen on a green background. Later, this octagonal star became a 5-pointed star and the color turned red.

In 1844, a flag with a 5-pointed star and a moon was chosen as the official flag of the Turks. The flag was used until 1936, but in June 1936 Turkey decided to make changes to the flag. This flag is made in precise dimensions and sizes and everything is exactly in its place.

The current Turkish national flag is borrowed from the Ottoman version. The only difference is the size of the star and the moon, which became accurate and standardized. Dimensions and dimensions were determined by law in 1936.

The flag of Turkey is one of the most beautiful flags in the world. The emblem of the moon and the star in the flags of Islamic countries refer to the religion of the people of the country.

The star means the purity of the people and peace, and the red background color of the flag of this country leads to the growth and development of Turkey. Avoid going away.

The moon and star used in the Turkish flag symbolize the religion of the people of this country. These symbols were very popular before the birth of Christ and during the reign of the kings of Constantinople.

After this time, the moon and stars became elements to represent Islam and also flew to the flags of countries such as Tunisia, Algeria, Pakistan, Turkmenistan, Malaysia and Libya.

In a word, it can be said that the moon and stars in the Turkish flag are a symbol of the religion of Islam to which the Turkish people tend. Apart from the shape of these two symbols, their color also has something else to say.

The white color of the moon and stars in the Turkish flag means the purity of the soul of the Turkish people. The red background also means the progress of Turkey in the years that have passed.

Traditionally, red is an Islamic color used by the Ottomans before the collapse of the empire in 1918.

They fought against colonial powers such as Britain, France, Russia, and Greece. The war claimed the lives of more than 40,000 Turkish soldiers.

The light of the moon and Venus (thought to be a star) is reflected at night in the bloodshed.

This is a symbol of the sacrifices made so that the country can gain independence. The crescents of the crescent moon also represent Turkish religious beliefs. With eight points, this star represents the eight states of the Ottoman Empire.

Uses of the Turkish flag

Pilots, navies and gendarmes carry the Turkish flag on their clothes or hats.

Other places where you can see the flag are the celebrations and ceremonies that are held in this country.

Usually in ceremonies when people come to the streets, the flag can be seen in their hands. Demonstrations and protests are among the scenes in which the Turkish flag is carried by the people.

Military funerals are also one of the places where this flag is. At the funeral of the deceased, the flag placed on the coffin and carried.

The Republic of Turkey

It is located in the Balkans (a region in southeastern Europe).

Turkey to the east with Iran, Nakhchivan, Armenia, and Georgia; In the southeast with Iraq and Syria; It has borders with Bulgaria and Greece to the northwest (European part).

Turkey has borders by the Black Sea to the north, the Marmara Sea and the Aegean to the west, and the Mediterranean Sea to the southwest. Turkey also has two strategic straits, the Bosphorus and the Dardanelles.

Anatolian Peninsula has always been one of the oldest inhabited areas in the world.

Today, in ancient times, several cities ruled Turkey, such as Ludia and Ionia. Until about 500 BC, these states were extinct by Cyrus the Great Achaemenid and Turkey came under Achaemenid rule. After the invasion of Alexander in 333 BC. Asia Minor fell to the Seleucids; And after a while, the Romans took their place.

After that, the migration of Muslim Turkmen tribes from eastern Iran to Asia Minor began, and these tribes gradually formed small local governments there. One of the most famous of these tribes was the Qayi tribe, who lived near Ankara.

From then until about 150 years later, the Ottoman rule occupied most of Anatolia.

The Ottoman Empire disintegrated in World War I and was invaded by Britain and its allies.

Mustafa Kemal Pasha became the national hero of Turkey due to the organization of national resistance against foreign states.

He introduced the Latin script to write the Turkish language and took many measures for the industrialization and westernization of Turkey and created a new era in Turkey.

After a one-party period in 1329 (1950), the Democratic Party took power from the opposition political group.

In 1974, Turkey prevented the annexation of Cyprus to Greece by intervening militarily against the Greek coup in Cyprus.

In 1375, he again overthrew the government forces that had come to power with Islamic plans. Since 1984, the Kurdistan Workers’ Party (PKK) and the Turkish government have waged many military conflicts. Turkey became a member of the United Nations in 1325 and joined NATO in 1331.

Turkey is a side member of the European Union and is now trying to consolidate its democracy and economy through reforms so that it can start negotiations for EU membership.

Culture of the Turkish people

Turkey’s geographical location and proximity to European countries and the presence of many tourists and travelers in Turkey have played an important role in the culture of the Turkish people.

In general, Turks are very family-friendly, kind, and warm-hearted.

In addition, the man is the head and determinant of the family, and the woman, according to the law, takes her husband’s last name after marriage.

It is interesting to know how many wives it is illegal to have in Turkey, and marriages must be officially registered with the relevant authorities. Religion alone (without legal registration) is illegal.

The language of the Turkish people

The dominant and official language of the Turkish people is Turkish (Istanbul) with the letters of the Latin alphabet.

The Arabic-Kurdish languages (with a mixture of Turkish words) and dialects of ethnic minorities are used informally by the Turkish people.

Arabic (Ottoman) was written and the written language of these people since the establishment of the Republic of Turkey by Atatürk in 1302 AH (1923) is written in Latin script.

Turkey is located between six Asian countries and two European countries. The border countries of Turkey are 499 km to the east of Iran. 9 km to the Republic of Azerbaijan, 268 km to Armenia, and 252 km to Georgia.

Turkey has access to the sea from three sides.

The Black and Marmara Seas, the Aegean, and the Mediterranean are connected to the high seas through the Bosphorus and the Dardanelles, giving the country a geographical location. Its largest and most important city is Istanbul.

91 thoughts on “Flag of the Republic of Turkey”

The flag of Ohio State

Wed Dec 2 , 2020
The Ohio flag is triangular and the only flag in the United States to have a non-rectangular shape, designed by a man named John Eisenman in 1901. The triangle is using the main lines of the flag, which symbolize hills and valleys, and the striped lines that show the roads […] 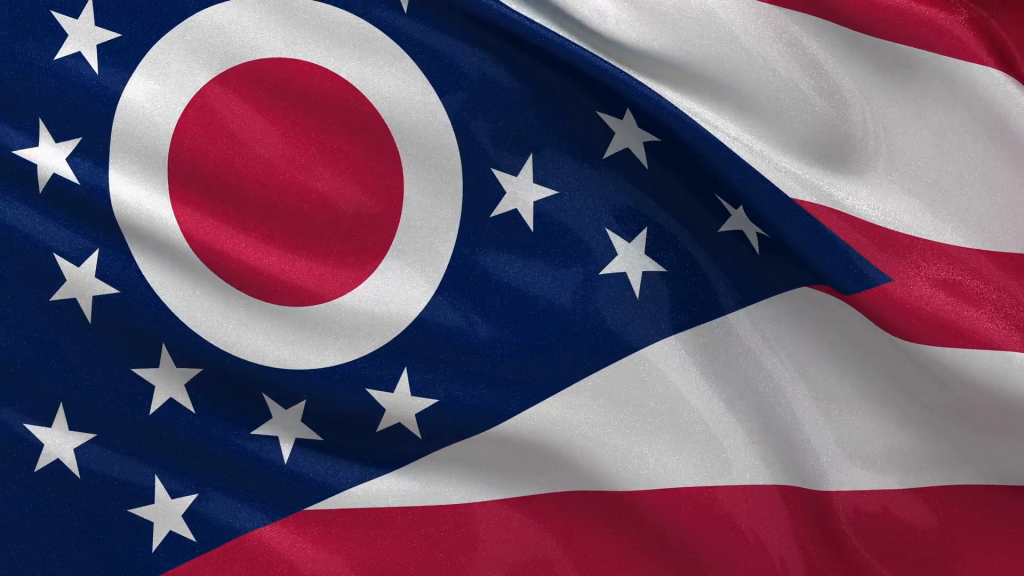