Like many other countries in the Middle East, Tunisia adopted its flag relatively recently. The Tunisia flag design is inspired by the old flags of Tunisia but also owes it to the flag of the Ottoman Empire, which once ruled Tunisia along with many other nations in the region.

The crescent and star are reminiscent of the Ottoman flag and are therefore a symbol of Tunisia’s history as part of the Ottoman Empire. This flag was adopted in 1831 and its ratio is 2: 3. The original version was made by Al-Hussein II bin Mahmoud and changed in 1999.

The Republic of Tunisia is the northernmost country in Africa, bordered by Algeria to the west, Libya to the southeast, and the Mediterranean Sea to the north and east.

Flags were previously used in Tunisia as naval flags on Tunisian ships. Several flags have been used throughout history, and it was in the nineteenth century that a multi-band flag in red, green, and blue was used.

In the 19th century, the Tunisian flag was used in the country. This was used in public ceremonies and was used until 1957 when the monarchy was dissolved.

Also, It was during the nineteenth century that the flag was later used, which later led to modern design. It was decided by the leader of the Husseiniyya dynasty to use a seal with the moon and the crescent star to distinguish Tunisian ships from other ships.

This happened in 1831 and the flag was adopted, although there are differences in the actual date of the flag’s adoption.

Even during the French protection, the Tunisian flag remained unchanged. However, the French flag was placed in the canton during this period, which was held from 1943 to 1956.

When the flag was no longer used, the original design without the three French colors was rebuilt and is still in use today.

The colors of the Tunisian flag symbolize the bloodshed by the martyrs who lost their lives during the 19th-century occupation of France by Tunisia. White also represents peace.

The Tunisian flags show a red star and a crescent on a white disk in a red area. This flag is quite similar to the flag of the Ottoman Empire, which shows the historical connection between the two nations.

The red color also indicates the bloodshed by the Tunisian people during the war with the Ottoman Empire in 1574. The white part is a symbol of peace and the disk represents the sun and the power of the country.

This star has five points and each one represents one of the pillars of Islam. The crescent is also a traditional symbol of Islam, representing the country’s ancient religious heritage.

The Republic of Tunisia

Tunisia, officially the Republic of Tunisia, is a country in northern Africa and the southern Mediterranean bordering Algeria to the west and Libya to the east and south. The country has a population of about 11,839,000.

The capital is Tunisia, with a population of 693,000, and the official language is Arabic.

About 8000 BC humans lived by hunting and gathering in present-day Tunisia. They began farming around 5000 BC, although they still used stone tools. Then, from about 1100 BC, the Phoenicians in present-day Lebanon settled and traded in the region.

Around 480 BC, the Phoenicians established Carthage. Gradually the city became stronger. Gradually, the Carthaginians built an empire in the Mediterranean.

However, they clashed with Rome. The first Phoenician war between Carthage and Rome began in 263 BC and lasted until 241 BC. This ended with the defeat of Carthage.

The Second World War broke out in 218 BC. This time Hannibal led the army through the Alps to Italy, but he could not capture Rome. Finally, in 202, the Carthaginians were defeated by the Romans at the Battle of Zama. One-third fought between 149 and 146 BC. This time Carthage was destroyed. However, the Romans later rebuilt Carthage as a Roman city.

Under Roman rule, Tunisia prospered and exported grain and olive oil to other parts of the empire. In addition, many Romans settled in the area and trade flourished.

However, in the 5th century, the Roman Empire was collapsing. A people called the Vandals had conquered Spain. In 429, 80,000 vandals moved to North Africa under Jenserik. In 439 they conquered Carthage and established a new kingdom. .

Byzantine rule in Tunisia lasted until 698. In that year, the Arabs captured Carthage. At first, the caliphs ruled Tunisia, but in 800 Ibrahim ibn Aqlab was recognized as the hereditary ruler of the country. Tunisia prospered and trade flourished during the Aqbalid dynasty.

Tunisia in the Middle Ages

However, in 909, a strict sect called the Ismailis led an insurgency and drove out the revolutionaries. The Ismaili leader took over Tunisia. He claimed to be the daughter of Muhammad Fatima, so his dynasty was named Fatima.

In 921, the Fatimids established Mahida, which became the capital. Then in 969, the Fatimids conquered Egypt and soon made Cairo their new capital. Since then, Tunisia has been ruled by a semi-independent dynasty of governors called the Zirids.

However, the Zaraids separated from the Fatimids and became completely independent in 1049. In retaliation, the Fatimids persuaded two Bedouin tribes, Lady Hilal and Lady Salim, to attack Ziririd.

In addition, in the 12th century, the Normans (who ruled Sicily) occupied most of Tunisia’s ports. They arrested Jarba in 1135 and Mahdieh in 1148. However, the atheists who came from Morocco drove them out. The Al-Muhaddiths conquered Tunisia in 1159.

In 1574 Tunisia was conquered by the Ottoman Turks. During the 17th, 18th, and early 19th centuries, many Tunisians were pirates. They were called Barbarian pirates. (The word barber is derived from Berber). From time to time, European powers acted against Berber pirates. (For example, in 1655 the English Admiral bombed Blake Porto Farina). The Europeans also extorted various treaties, none of which ended the piracy.

Then during the nineteenth century the influence of Europe, especially Italy, increased in Tunisia. When Tunisia went bankrupt in 1869, Britain, France, and Italy took control of Tunisia’s finances. Then, in 1881, French troops arrived from Algeria, forcing the Tunisian big to accept French protection.

Tunisian nationalism grew very early and the independence movement was formed in the early 20th century. Then in 1940, when Germany conquered France, Tunisia came under the French Vichy government. The Germans occupied Tunisia in November 1942, but their forces surrendered to the Allies in May 1943.

After World War II, Tunisians continued to incite freedom. Finally, on March 20, 1956, France agreed to the independence of Tunisia. The first election was held on March 25, 1956. Tunisia was originally a constitutional monarchy but became a republic in 1957.

Habib Bourguiba became the first president. In 1975, he was appointed president for life, but was ousted in 1987 and replaced by Zine El Abidine Ben Ali.

Meanwhile, oil was discovered in Tunisia in 1964 while taking a non-aligned position in Tunisian international affairs.

However, unrest broke out in Tunisia in 2011 and Ben Ali was forced to flee. A new chapter in the history of Tunisia has begun. Elections were held in Tunisia in October 2011. The new constitution was adopted in 2014.

Today, Tunisia’s economy is growing and poverty is rapidly declining. Tunisia is becoming more successful day by day. Tourism is an important industry. In 2020, Tunisia had a population of 11 million.

In general, the economic situation in Tunisia is very diverse. The country’s main industries include oil and derivatives processing, as well as iron ore and textiles, which are other important economic sectors in Tunisia.

Tunisia has excelled in the manufacture of industrial machinery parts. The country produces a variety of organic beverages that have entered the economic sector in the world. Tunisia has emerged as a very powerful country and the service sector is booming.

Evidence shows that Tunisia’s financial and economic resources have progressed steadily. The main agricultural products in Tunisia include olives and olive oil, and of course, cereals and tomatoes are also widely in this country. Dairy products are an important part of Tunisia’s economy. The inflation rate in this country is about 6.50 percent.

Culture and education are other powerful economic sectors in Tunisia; The truth is that the Tunisian government has tried to create a good turnover in the field of education and it has been very successful in this field.

The economic system in Tunisia has changed a lot in recent years, and it is clear that the economic approaches in this country will be even greater in the coming years.

The people of Tunisia like to talk a lot, and pain and heartache are part of the culture of the people of this country. Greetings generally greeted with a nod. Few people in this country spend much time at the beginning of a greeting and become intimate.

The hijab is free in Tunisia and the use of formal clothes is very rare in this country. The family has a special place among the people in Tunisia. To get Tunisians home, it is best to bring them gifts such as sweets, chocolate, cakes, fruit, or flowers.

Tunisia is located in North Africa, more precisely in the southwestern part of the Mediterranean Sea. The capital is Tunisia. Tunisia has an area of ​​163,610 square kilometers. Zambra, Qarqana, and Jerba are important islands in Tunisia.

The language of Tunisia is Arabic, although in some parts of the country French is. The currency of Tunisia is the dinar. This country is three and a half hours behind Tehran in terms of time.

Tunisia has a hot and dry climate and most parts of the country covered by deserts. The northern coast of Tunisia has a relatively fertile and forested area.

Tunisia has several winter lakes that are covered with salt in summer. At higher altitudes and in the mountains, the climate is milder.

The weather in Tunisia is not too cold or too hot in the spring, and the best option for spending leisure time is along the beautiful beaches of Tunisia. Tunisian spring has a temperate climate. The winters in Tunisia are rainy and the rainfall in this country is about 448 mm.

Flag of the Republic of Cuba

Sat Jan 23 , 2021
The Cuban flag has its roots in several countries. Its design story is legendary, as are many national flags in the origin stories. It seems that love for the country creates flag makers to create a symbol with deep meaning for themselves and their compatriots. The Cuban flag made up […] 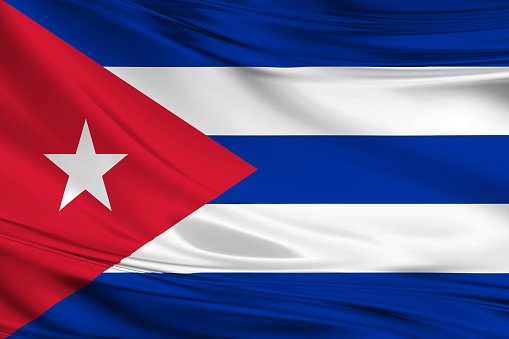