The Tanzania flag, with a ratio of 2 to 3, formed after the merger of Tanganyika and Zanzibar on April 26, 1964, and the formation of a new republic called Tanzania on October 29 of the same year.

The green ribbon at the bottom of the Tanganyika flag replaced with the blue ribbon at the top of the Zanzibar flag, and the middle ribbon diagonally rearranged to give the two parts an equal share.

Thus, two triangles are in the flag, the upper triangle (in the waving part) is green and the lower triangle is blue.

In the early 20th century, the British ruled Tanganyika. After World War II, the region became a UN trust zone.

During the 1950s, the region became the Tanganyika African National Union. During this time, the region adopted a flag of black, yellow, and green horizontal bands.

Tanganyika gained its independence in 1961, and after gaining independence, yellow ribbons were added to the flag.

Meanwhile, the history of the Zanzibar Sultanate flag goes back to the time when the red flag was first used.

But the sultan was overthrown in 1964 during the Zanzibar Revolution and a new national flag was adopted.

This triangular flag has horizontal stripes in blue, green and black.

That same year, Tanganyika and Zanzibar decided to unite to form one state. After the unification of the countries, the elements of the flag of each region were to create a new national flag, which was first approved in June 1964.

The people of Tanzania have one of the most colorful national flags in the world. The modern flag used today was first adopted in 1964.

This was because the individual flags of Tanganyika and Zanzibar merged following the merger of the two countries in the same year.

Elements of both main flags can be found in the Tanzanian flag that is in use today.

There is a great deal of symbolism behind the current flag. Flag colors are used to represent people, terrestrial features such as rivers and lakes, and the “rich” recreation of the country. These meanings are further broken down in the discussion of flag colors.

The top left triangle is green, while the bottom right is blue. The triangles are divided by a diagonal black band that is decorated in yellow.

Like other flags around the world, the color of Tanzania’s national flag is very important.

Green indicates the vegetation and agricultural resources of the earth. The color black is a symbol of the natives of this country.

Blue represents the Indian Ocean as well as its rivers and lakes. The narrow stripes of the flag symbolize the sediments of the earth.

The United Republic of Tanzania

Tanzania, known as the United Republic of Tanzania, is actually an African country located in the east of the African continent, with Kenya and Uganda in the north with Rwanda, Burundi, and the Democratic Republic of the Congo in the west and Zambia in the southern Malawi and Mozambique border.

Arab and Iranian merchants first began their colonial rule in Tanzania in 700 AD. In 1500 AD, the Portuguese entered Tanzania and settled in the coastal areas of this country.

This practice continued until the 17th century, when they were able to control what is now Tanzania.

After this period, the Sultan of Oman came to power in this region. On the other hand, the area now called Rwanda was colonized in 1885 in eastern Africa.

After the end of World War I, the first designated area was ceded to Britain by the League of Nations. No specific information is available on the history of Zanzibar.

What has been seen is Zanzibar with the Arab countries that are located in the southwest part of Asia. In 1503 Zanzibar became part of the Portuguese tribute group and was included in the list of major trading districts. The region was colonized by Oman and the Arabs, in 1698.

Finally, in 1861, independence was declared from the Oman Group. In 1890 it came under British protection so that various historical states in Tanzania were evaluated.

Tanganyika seceded from Britain on December 9, 1961. On April 26, 1964, the two nations were able to accurately prepare for the merger.

Thus, after six months, the name of the Republic of this country will be changed to Tanzania. The historical situation of Tanzania has improved significantly compared to the past and has been supported.

The culture of the Tanzanian people

The right hand is considered a clean hand in Tanzania and is used for shaking hands.

The left hand is considered dirty by the people of Tanzania. This process is also observed for greetings and greetings, and if you shake hands with your left hand, you have been rude to your host.

In Tanzania, people are not in the habit of kissing or hugging anyone in a public place. This is very important for young couples.

Smelling food in Tanzania is not the right thing to do. People in this country consider smelling food as an insult, and it is not seen in the customs of the people of Tanzania.

It is better to follow this culture. Of course, this means that the food is contaminated or poisonous. In the culture of the people of Tanzania, no one has the right to complain about bad food.

Tanzania is located in East Africa, bordering Kenya and Rwanda, as well as Zambia. It also borders Congo. Tanzania has a blue border with Victoria in the north.

Tanzania covers an area of ​​947,303 square kilometers and is listed as the 13th largest country in Tanzania.

The country is larger than Egypt and smaller than Nigeria. Plateaus with shrub vegetation can be seen in most of Tanzania, and a series of grasslands can be seen in this part, which depends on volcanic areas in the northern parts.

Tanzania is adjacent to the equator, and the high altitude of this land has caused the temperature to be between 18 and 25 degrees Celsius.

The tropical climate is in this part and the amount of brush has reached a higher level.

Tanzania is located in the northeast of a mountainous region with dense forests, part of which consists of the Great Lakes of Africa.

In the north and west of the country is Lake Victoria, which is the deepest lake on the continent. Lake Nyasa is located in the southwest of Tanzania. Central Tanzania is a vast plateau that it covered with plains and arable land.

The east coast of Tanzania has a hot and humid climate. Calamba Falls is located in Rekua Province in southwestern Tanzania.

2 thoughts on “Flag of the United Republic of Tanzania”

Sat Sep 12 , 2020
The current Myanmar flag is one of the youngest flags in the world, but the historical flags of this country are one of the oldest flags recorded in Asia. It is common to find a historic Myanmar flag registered as the Burmese flag, but these two terms are largely interchangeable. […] 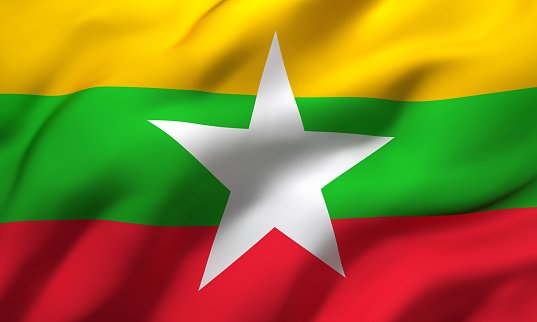