The Spain flag consists of three rows of horizontal stripes in red, yellow, and red. The yellow stripe in the middle of the flag is twice the width of the red stripes at the top and bottom.

History the flag of Spain

The flag of any country is a symbol of independence, identity, and culture of its people. The Spain flag is one of the oldest flags in the world. The history of the Spain flag dates back to the 18th century.

The two colors red and yellow are among the old symbols of the flag that are used in many countries.

During the reign of Charles III, a new design of the Spain flag was designed, which has been used to this day.

The new design of the Spain flag includes red and yellow horizontal stripes. The width of the yellow stripe in the middle of the flag is twice that of the red stripes at the top and bottom.

In the middle of the flag was the Spain emblem. One of the reasons for the red and yellow colors used in the Spain flag is that it can be easily seen in the sea.

The first flag with a new design was designed and used in 1785. The background design of the flag has not changed since then, but the royal symbol in the middle of the flag has changed.

The only period in which the colors of the flag changed was during the Second Republic of Spain in 1931. At that time, the color of the bottom red bar became purple and the width of the bars was measured.

The Spain national emblem has undergone many changes since the 15th century. The emblem originally consisted of a black eagle with a royal crown in front of it.

Later, this eagle was removed and the crown of the kingdom was designed in different ways.

In 1873, the first Spain republic used the symbol of a castle and a shield on the Spain flag. The current Spain emblem used on the flag has not changed since 1981. Spain has two types of flags.

symbol and color of Spain flag

The Spain flag, according to the Spain constitution, consists of three horizontal rows.

These three horizontal rows are red, yellow, and red from top to bottom. The size of the middle row, which is yellow, is twice the size of each red row.

If you pay attention, the design seen in the yellow bar is not exactly in the center and is tilted to the left. The designers of the flag noticed that the central design would not be well visible if the wind blew, so the main symbol was not in the middle of the bar.

Each of the four quadrants in the flag symbolizes one of the four major dynasties and eras of the Spain monarchy, all of which formed a united Spain in the late 15th century.

Castile is marked with a castle and fortress, Leon is represented by a lion, Aragon is marked with 5 yellow stripes and 4 vertical red stripes, and Navar is symbolized by interconnected chains.

Morris (King of Granada) appears at the bottom of the logo with pomegranate fruit. The two flag-enclosed pillars symbolize the discovery of Spain and American colonization, and the pillars are the gateway to Gibraltar to the Atlantic Ocean. And they are an allusion to the new world.

Meaning of the color

Throughout the long history of Spain, there are many legends to explain the meaning of colors in this flag.

One legend states that the red and yellow colors of the flag are a tribute to the popular Spain tradition of cowboy Yemeni, in which red is chosen to represent the bloodshed by the cows while yellow represents the sand in It is a bullring.

However, the exact explanation behind the choice of colors can be found in a historiography of the Spanish navy in the eighteenth century.

Red and yellow colors of the navy building and the main colors choose on the suit of King Ferdinand II.

Spain, the Kingdom of Spain officially, is a member of the European Union that is an independent country and.

Its location is on the Iberian Peninsula in southwestern Europe.

Spain has border with Portugal (1214 km long) is the longest integrated border in the European Union.

In addition to the mainland, Spain includes the Balearic Islands in the Mediterranean, the Canary Islands on the African coast of the Atlantic Ocean, the two autonomous cities of Sebte and Tapestry in North Africa bordering Morocco and several other inhabited and uninhabited islands including Alboran, Shafarinas and Aloz, and Welzdla is Gomera.

Spain to the west with Portugal, to the south through its canyons in North Africa (Sabbath, Tapestry, and Penion de las Gomera) to Morocco and Gibraltar (part of the British Sea), to the northwest along the Pyrenees.

France and the Principality of Andorra are its borders. Along the Pyrenees, 1,600 meters from the border with the province of Carna in Catalonia, is the city of Brunebum Yivia in France.

In addition, a number of other uninhabited islands on the Mediterranean side of the Strait of Gibraltar belong to Spain, including the islands of Chafarinas, Alhusmas, and the small island of Parkhil.

The island of Alboran, located between Spain and North Africa, is also under Spain rule. The small island of Fasan on the Bidasua River is ruled by Spain and France.

There are three climates in Spain based on geographical features:

Mediterranean climate with hot and dry summers. According to the Kippen-Geiger climate classification, there are two types of climate in Iberia: Csa and Csb.

In addition, there are other major sub-climates, such as the Alpine climate in the Pyrenees and the Sierra Nevada and the subtropical climate in the Canary Islands.

Modern man first set foot on the Iberian Peninsula about 35,000 years ago. About 200 BC, the region came under Roman rule and was called Hispania.

In the 15th century, after the intergovernmental marriages of the Catholic rulers and the unification of these governments, as well as the complete fall of the Andalusia and its recapture from the Muslim morons in 1492, Spain emerged as a unified state.

Early in modern times, Spain became a powerful world empire, and the Spaniards entered and settled in the Americas as one of the first conquerors of the New World.

Today, Spain is a democratic country with a parliamentary government under the monarchy. Spain is a developed country and the 19th largest economy in the world in terms of GDP.

It also has a high standard of living. Spain is a member of the United Nations, NATO, the World Trade Organization, the Organization for Economic Co-operation and Development, and the European Union.

7 thoughts on “Flag of the Kingdom of Spain”

Sat Aug 8 , 2020
The Norway flag is a symbol of national pride, identity, and independence for more than 100 years. The current flag consists of a red square and a dark blue north cross with a narrow white border. The cross is slightly off-center, close to the lift. The color of the Norway […] 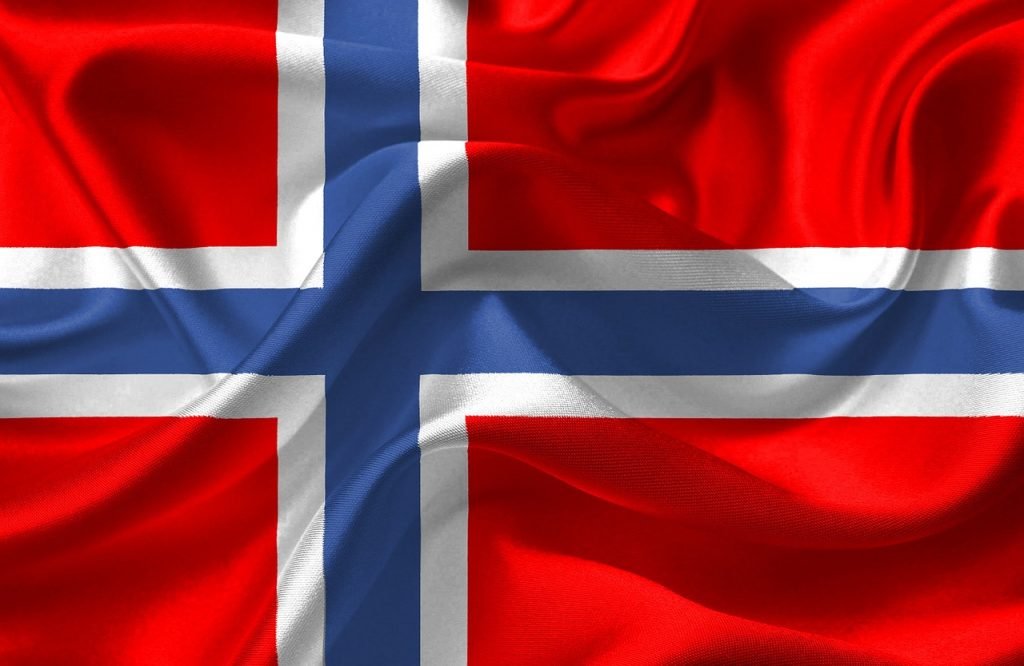