The South Sudan flag was adopted following the signing of a comprehensive peace agreement that ended Sudan’s civil war.

A similar version of the flag was previously used as the flag of the Sudan People’s Liberation Movement.

The flag of South Sudan is older than the country itself, as it was adopted in 2005, while the country gained independence in 2011.

The Sudanese people gained their independence in 1956. While the people wanted regional symbols, the government opposed the idea because they did not believe it would unite.

The people of South Sudan felt discriminated against by the North after gaining their independence.

This led to a civil war for their independence, and a peace agreement was later signed in 2005. It was only in 2011 that the referendum on South Sudan’s independence was approved.

The nation became independent on July 9, 2011. The flag is based on a design created in the 1990s when South Sudan was at war with the north.

The national flag of South Sudan is one of the most flags in the world, and each color represents a different description of the nation.

Green has many meanings, including lush land, agriculture, the nation’s natural wealth, and the country’s progress throughout history.

White represents peace for the nation after the war for freedom and independence.

The color blue is a symbol for the Nile River, which is considered the source of life for the nation. Finally, yellow represents hope, determination, and unity

The design of its flag uses these colors as three colors black, red, and green with white stripes in between. There is a blue triangle on the elevator side with a yellow five-pointed star in the center.

The Republic of South Sudan

South Sudan, officially called the Republic of South Sudan, is the newest country in the world. It is a landlocked country located on the African continent in southern Sudan.

At midnight on July 9, 2011, South Sudan became an independent state with 99% of the vote in favor of secession, following the approval of the January 2011 referendum on its secession from Sudan.

South Sudan also voted to secede from Sudan, largely due to cultural and religious differences and a decades-long civil war.

In addition to underground wealth resources such as oil, the Nile River is important to Sudan, especially South Sudan. South Sudan is also important in terms of forest resources.

According to some estimates, more than 68% of Sudan’s known oil reserves are located in South Sudan, while some estimates put the figure at 80%.

The history of South Sudan is not documented until the early 1800s when the Egyptians took control of the region.

However, oral tradition claims that the people of South Sudan entered the region before the 10th century and that there were organized tribal communities from the 15th to the 19th century.

In the 1870s, Egypt attempted to colonize the region and established the Equatorial Colony.

The Mahdavi uprising took place and the tropical status of an Egyptian outpost ended by 1889.

In 1898, Egypt and Britain established joint control of Sudan, and in 1947, British colonizers entered South Sudan and tried to join Uganda. The Juba Conference joined Sudan in 1947 instead of South Sudan.

Shortly after independence, however, Sudanese leaders failed to deliver on promises of a federal system of government, which sparked a long period of civil war between the north and south of the country, as the north has long sought to implement Muslim policies and customs in the south. Christian

In the 1980s, Sudan’s civil war created serious economic and social problems that led to a lack of infrastructure, human rights issues, and the displacement of much of its population.

On January 9, 2011, Sudan held a referendum on the secession of South Sudan.

The election was approved by almost 99% of the vote, and on July 9, 2011, South Sudan officially seceded from Sudan, making it the 196th most independent country in the world.

South Sudan’s economy is largely based on exports of its natural resources. Oil is South Sudan’s main source, and oil fields in the southern part of the country drive its economy.

However, there are differences with Sudan over how Esteghlal’s oil revenues will be distributed after South Sudan’s independence.

Timber sources, such as turmeric, make up the bulk of the region’s economy, and other natural resources include iron ore, copper, chromium ore, zinc, tungsten, mica, silver and gold.

Electricity is also important because the Nile has many tributaries in South Sudan. Agriculture also plays a major role in South Sudan’s economy, and its main products are cotton, sugarcane, wheat, nuts, and fruits such as mango, papaya, and banana.

The average age of the people of this country is 19 years. Life expectancy is 57.2 years for men and 60.3 years for women.

Most people in South Sudan are Christians or followers of ancient tribal religions. Muslims live in the northern part of the country, which makes up about 20 percent of the population.

South Sudan is a landlocked country located in East Africa. Because South Sudan is located near the equator in the tropics, most of its landscape is made up of tropical rainforests, and its protected national parks are home to much migratory wildlife. South Sudan also has vast swamps and meadows.

The White Nile, the main tributary of the Nile, also flows through the country. The highest point in South Sudan is Kinyeti with 10456 feet (3187 meters) and is located on its southern border with Uganda.

The highest rainfall in South Sudan is between April and October, with an average annual average of 37.54 inches (953.7 mm).

Flag of the Republic of Azerbaijan

Tue Dec 22 , 2020
The Azerbaijan flag is a horizontal tricolor consisting of three equal-sized spaces of light blue, red and green, with a white crescent and an eight-pointed star in the center. The three colors replaced the previous design with the SSR of Azerbaijan. Light blue symbolizes the Turkish heritage of Azerbaijan, red […] 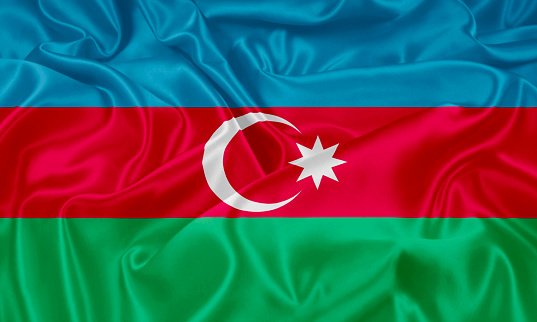