The Russian flag consists of horizontal white, blue and red stripes. It was adopted on December 11, 1993, after the constitutional crisis.

This flag, although simple in design, has a deep meaning for the Russians. Every August 22, the country’s streets are covered with flags to celebrate their country.

Russia is the largest country in the world with more than 186 ethnic groups and extensive history. The first modern flag raised in the country was taken from Peter the Great, who had ambitious plans for the country.

For starters, he wanted to turn it into a modern country with a powerful navy.

So he traveled to the Netherlands to learn more about shipbuilding techniques and concepts. In 1699, he adopted a flag for Russian merchant ships. The flag consisted of three Dutch red-white-blue colors.

The only difference between the Dutch flag and the Russian flag is that the latter color is set in a different format from white-blue-red.

For the Russians, these colors had a significant meaning. For example, it is stated that the red shield of the Greater Moscow Municipality is covered in blue and mounted on a white horse.

In addition, according to historical records, in 1667, a fourth white and red flag with a blue cross was used on Russia’s first warship, the Oryol.

Peter I’s flag was considered unofficial. It, therefore, used on ships but was not a national flag.

The official flag at the time was the standard imperial tsar, consisting of a yellow background with tsar emblems in the center. These two flags were from 1700 to 1858. In 1858, a festive flag came. Nevertheless, Peter I’s unofficial flag was the most popular.

Before the outbreak of World War I, the St. Peter’s flag was modified using a golden yellow canton containing royal arms. This banner was a symbol of solidarity between the Russians and the ruling family.

From 1858 to 1917, a flag in three colors black, yellow and white, with the decree of Alexander II was introduced as the first official flag of the Russian Empire.

The colors were similar to the Russian national emblem. However, the traditional flag in white, blue, and red was preferred among the people and continued to be used as an informal flag. In 1896, Nicholas II formalized the white-blue-red flag, which continued to be used until 1918.

The October Revolution of 1917 marked the end of the monarchy and the rise of the Soviet regime. The first flag of the Soviet system consisted of a red background with the word RSFSR in the upper left corner in Russian. Also, the flag was later changed to a hammer and sickle with a five-pointed star at the top and a blue vertical line on the left.

This flag remained as the flag of the country from 1954 to 1991. In 1923, a Soviet flag was adopted, with the USSR national emblem initially in the center of the red background.

In addition, the emblem consisted of two bands of wheat attached with a reddish ribbon. Between the branches of the rising sun, the earth and the five-pointed Soviet star stood on top of it. In the center of the sphere was a sickle and hammer.

The flag was quickly replaced by a simple red flag consisting of a hammer and sickle with a five-pointed star in the upper left corner.

When the Soviet Union was dissolved in 1991, its symbols were discarded. The anti-communist “white movement” adopted the white, blue and red flags with minor changes to the blue shade, which was lighter than the traditional flag.

The flag became the official flag four months after the dissolution of the Soviet Union on August 21, 1991. Thus, this flag became a symbol of a movement against communist ideology. Widely used in the “August coup” against the Soviet government.

In 1993, the flag was partially changed and the blue bar darkened like traditional versions of the flag. In addition, the flag had no sign.

However, the official flag of the President of the Russian Federation consists of a two-headed golden eagle emblem with a cane and a globe on it.

In the center of the eagle is a shield depicting St. George killing the dragon. It is a Russian national emblem and has been used since the time of Peter the Great. In the Kremlin, the flag is on presidential vehicles and throughout any government agency.

There are various interpretations of what the Russian flag designed to symbolize. It is that the three colors of the flag – red, white, and blue – show different traits over the years.

While there is no official ruling on what the flag represents, there is a popular consensus among the Russian people.

Many believe that white stands for frankness and nobility. The Russians believe that blue stands for many things, including loyalty, chastity, and honesty. Red represents love, courage, and generosity.

As mentioned earlier, the colors of the Russian flag are red, white and blue. The flag design has a horizontal band of each color, each of which has the same width and length.

From top to bottom, the colors are in the following order: white, blue, and red. No specific colors have been set by the Russian government for use on the flag, although federal agencies usually use the same colors. The federal constitution simply paints “white,” “red,” and “dark blue.”

Russia, officially the Russian Federation, also known as RF in Russia, is the largest country in the world, located in northern Eurasia.

Russia is located in northern Eurasia and borders the North Pacific, the Arctic Ocean, the Caspian Sea, the Black Sea, and the Baltic Sea.

In terms of population, Russia is the ninth most populous country in the world. Many ethnic minorities live in Russia, the most important of which are the Tatars, who make up about 4% of Russia’s population.

The population of Russia is estimated at 144 million 463 thousand people, and the total population is spread over an area of ​​17,075,400 square kilometers. Also, most of the country’s population lives in the west, which belongs to the European part.

Other ethnic minorities in Russia that make up a significant population include the Chechen, Ukrainian, and Azerbaijani, ethnic groups

Russia dates back to the 14th century; When the city of Moscow was the capital of merchants, Ivan the Terrible was the first person to rule Moscow; But after a while, the Romanovs took full control and ruled Russia for almost 300 years.

Among the most important Romanov kings who made many interpretations and reforms to make Russia a superpower were Peter the Great and Catherine the Great.

In the early part of the twentieth century, much dissatisfaction arose with the country’s turmoil, with the defeat of the Japanese army as well as World War I fueling these protests.

Finally, in 1917, under Lenin, a revolution took place that overthrew the monarchy.

It was not long after Lenin’s rule that Lenin fought for power with his allies, and finally in 1924, Stalin took over the leadership of the Soviet Communist Party.

One of Stalin’s most important actions was the industrialization of Russia, but this leader destroyed many political parties so that in those years the prisons of Russia and the important cities of this country were full of political prisoners.

One of the most important historical events in Russia during this period was the invasion of Germany, in which 27 million Soviet citizens lost their lives. In World War II, Russia celebrated one of the greatest victories in its history and took control of most of Eastern Europe; That is why the Soviet government gained so much power in those years.

Stalin ruled present-day Russia until 1953, during which time he made the Soviet Union one of the world’s superpowers. In order to gain this great power, he killed the citizens of his nation.

Despite this view, Khrushchev was not much different politically from Stalin. Khrushchev also suppressed the uprising of the people of Eastern Europe.

Finally, in 1964, he ousted in a political coup and replaced by Brezhnev. During this time, the financial and economic situation of the people deteriorated and political repressions continued.

After a while, the economic and political problems caused by the war with Afghanistan increased even more than before. Eventually, a man named Gorbachev was able to slightly expand Russia’s political, economic, and industrial climate. After him, Vladimir Putin took power in Russia and is still the president of this country.

The culture of this country can be understood from the style of architecture and historical monuments left from the amazing history of Russia. Russia is a country with a huge cultural heritage that is in museums.

The people of this country are very proud of their rich culture. There are about 160 different ethnic and cultural groups living in Russia.

The combination of the Russian race with different ethnicities has created a special art and culture, and for this reason, arts such as painting, dance, miniature, and especially literature are very rich in this country.

To the extent that Russian literature has been superior to European literature in the last three centuries. In the artistic and cultural record of Russia, the names of great writers such as Tolstoy, Dostoevsky, and Anton Chekhov recorded.

Russians are culture-loving people and place great value on great cultural figures. Russia inspires the Slavic race with its ancient and rooted culture throughout Europe

Russia located in northern Eurasia and borders the North Pacific, the Arctic Ocean, the Caspian Sea, the Black Sea, and the Baltic Sea. Russia is the ninth most populous country in the world in terms of population. Parts of this country located in Asia and other parts of Europe, so that its capital, Moscow, located in continental Europe and is the largest city in Europe.

Most parts of Russia, the cold lands of Siri, are uninhabited and therefore have a very small population relative to its area.

It covers twice the size of large countries such as China, Canada, and the United States. Russia’s population growth rate has dropped below zero, and all of these factors have made it relatively small in proportion to its area.

Countries bordering Russia in the southwest include the Republic of Azerbaijan and Georgia, as well as in the west with Eastern European countries such as Ukraine, Belarus, Latvia, and Estonia. Russia has a water border with Iran through the Caspian Sea. As mentioned, due to its proximity to the North Pole, the climate in Russia is cold and dry in most cities.

2 thoughts on “Flag of the Russian Federation”

Flag of the Federated States of Micronesia (FSM)

Sun Jan 3 , 2021
The Micronesia flag has a simple design that reflects both the nation’s past and its current state. The current design has influenced the indigenous elements of the nation as well as aspects of the nations that have influenced it to create the flag that embodies Micronesia and its people. The […] 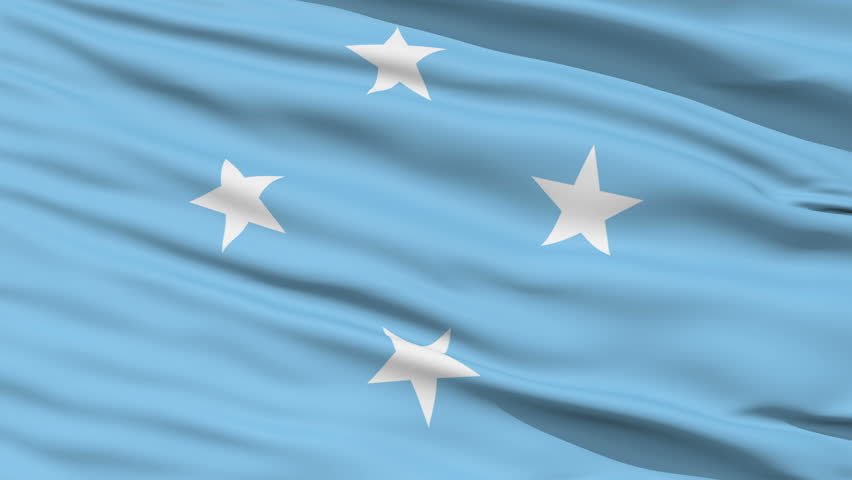