The Palau flag was adopted on January 1, 1981, when the island group seceded from the United Nations. Like the flags of several other groups of Pacific islands, light blue is used to represent the ocean and the country’s position.

While this puts Palau in common with the Federated States of Micronesia and other neighboring island groups, the disk on the flag (similar to the Japanese flag) is off-center like the Bangladeshi flag, but in this case, it represents the moon instead of the sun.

The current flag was introduced in 1981 when Palau became a republic.

Previously, the flag of the Pacific Islands Trust hoisted jointly with the flags of the United Nations and the United States.

The explanation for the choice of colors rooted in the history and customs of the Palawan people. The light blue of this square symbolizes the Pacific Ocean and also represents the transition from foreign domination to self-government.

The golden disk, slightly off center, points to the full moon. Palauians consider the full moon to be a good time for human activity.

At this time of the month, celebrations, fishing, planting, harvesting, cutting down trees, and carving traditional boats take place. The moon is a symbol of peace, love, and tranquility.

Futaranosuke Nagoshi, Japan’s professor of international relations, suggested that the Palawan flag pay homage to the Japanese sunrise flag and symbolize the friendship between Palau and Japan.

Former Palawan President Kunio Nakamura responded to the theory in an interview with the vague phrase, “This is one way to present it.”

Flag designer John Blau Skbong denied the allegations, saying there was no particular connection between the two flags.

Palau first began using flags during the colonial period. The first Palau flag was the Spanish flag, which was used in the region in the mid-16th century. This continued to be used until 1899 when Spain ceded control of its last asset in Palau to Germany.

The German flag had already been flown over some islands since 1885, but the German Empire only gained full control of the region after this transfer of power. Palau came under Japanese control in 1914, when the islands began to use the Japanese flag.

Japan lost control of the islands in 1944 when they began using the US flag. The American flag was hoisted over the islands shortly after gaining full independence, but it was not the only flag used during that period.

The United Nations flag was used alongside the American flag in 1947, and in 1967 it was replaced by the Pacific Islands Trust Flag. The nation at the same time adopted the modern flag.

The American flag continued to be used until 1994 due to the close relationship between the two countries alongside the Palau flag.

The flag of Palau has a light blue background that indicates a yellow circle. The circle is placed near the center of the flag, but moves slightly upward.

This circle represents the full moon, which is a sign of success and a great time for most activities in the traditional culture of these islands. It also represents peace, love, and tranquility.

The Republic of Palau

The Republic of Palau (Palau: Beluu er a Belau) is an island nation in the Pacific Ocean, located 800 km east of the Philippines.

The capital of Palau is the city of Ngerulmud in the state of Malek. Palau is located 3,200 km south of Tokyo and is geographically part of the Micronesian Islands.

Palau has a population of 21,000 and lives on more than 250 islands. The most populous island among them is called Kroer.

The official languages ​​are English and Palauan, and the currency is the US dollar. 70% of the people of the country are of Palauan descent, 15% are Filipinos and 5% are Chinese.

Three-quarters of Palau’s population is Christian. About 9 percent of the population also believes in the Mudekangi religion, which is a combination of Christianity, Palau Sunni beliefs, and divination. Palau’s ancient religious rites are also common in the islands.

Among the country’s Christians, about 50 percent are Roman Catholics and 20 percent are Protestants. The administration of these islands has historically been in the hands of the Spaniards, Germans, Japanese, and Americans.

The country gained independence in 1994. Tourism, agriculture, and fishing are major economic activities in Palau. The tropical waters of this country make its underwater nature beautiful and diverse, and for this reason, it is a tourist attraction for divers.

The Republic of Palau consists of more than 200 Pacific islands, of which only eight are permanently inhabited. The original Palau immigrants are believed to have arrived from Indonesia as early as 2500 BC.

Palau is a combination of Polynesian, Malay, and Melanesian descent. Kinship has traditionally been the most important determinant of social status. Traditional customs maintain a value system that differentiates between individuals based on social status and gender.

Spain’s claim to the Caroline Islands, including Palau, was confirmed by Pope Leo XIII in 1885. In 1899, Spain sold the North Carolina and the Marianas to Germany.

The German period (1899-1914) increased economic activity in the form of coconut cultivation and phosphate extraction. The Germans have also been successful in fighting long-running flu and diarrhea epidemics that have reduced Palau’s population from 40,000 to 4,000 over the past 120 years.

Japanese forces invaded Palau in 1914 under a secret agreement with Britain. Crow became the administrative center of all Japanese assets in Micronesia, and by 1935 the Japanese civilian population in Palau had grown to approximately 26,000.

Japan turned Palau into a closed military zone in 1938. During World War II, fighting broke out between the US and Japanese forces on the islands of Peleliu, Angaur, and Koror.

The Free Association Agreement between Palau and the United States entered into force on October 1, 1994.

Palau’s economy consists primarily of tourism, subsistence farming and fishing. Diving and scuba diving activities in the rich marine environment of the islands, including the rock walls of the Moabar Dam and World War II ships.

The government is the largest employer that relies heavily on US funding. In the fiscal year 2000-2001, the number of business and tourist arrivals was about 50,000.

They have twice the per capita income of Micronesia. Long-term prospects for the important tourism sector have been greatly enhanced by the expansion of air travel in the Pacific, the growing growth of the leading countries in East Asia, and the willingness of foreigners to finance infrastructure development.

The Palauan community follows a very strict reproductive system. Childbirth is practiced in almost every aspect of the Palawan tradition, especially in funerals, marriages, inheritances, and traditional titles.

The system probably originated in the Philippine archipelago, which had a similar system until the colonization of the archipelago by Spain.

These foods include local foods such as cassava, taro, yum, potatoes, fish and pork. Western food is popular among Palau’s youth, and foreign tourists join the locals.

Other areas of Micronesia are much less similar to tourism and lead to fewer restaurants. Some local dishes include an alcoholic beverage made from a coconut tree. Drink made from kava root; And chewing betel nuts.

The traditional system of government still influences the affairs of the country, leading the federal government to make repeated attempts to limit its power.

Many of these efforts were in the form of constitutional amendments supported by large sections to support.

The Idid clan claimed Malcolm Island, the main economic zone and the most important port of Palau, citing documents from the German era. The ruling stated that the island belonged to the KSPLA.

The Palau Islands are bordered by Indonesia, the Philippines, and the Federated States of Micronesia. The three most populous islands of Corner, Polio, and Babeldaub are located in a coral reef. About two-thirds of the country’s population lives in Koror.

Also, the Kanygl Ringstone is located in the north of these islands, and to the west of the main archipelago of the country. There are about 200 uninhabited rocky islands.

The remote group of six islands, also known as the Southwest Islands, are located 604 km from the main islands of the country and make up the two states of Hatohebi and Sunsorul in Palau.

Palau has a tropical climate all year round with an average temperature of 28 degrees Celsius. Rainfall in this country is high in all seasons and the average is 3800 mm, but sunny days are not infrequent in these islands. Hurricanes are rare in Palau because the country is off-road.

Flag of the Republic of Argentina

Sun Feb 7 , 2021
The Argentina flag is a tribune, consisting of three equally wide horizontal bands in light blue and white. There are different interpretations of the reasons for these colors. The flag was created by Manuel Belgrano to create the Argentine Cockade and was first raised on February 27, 1812, during the […] 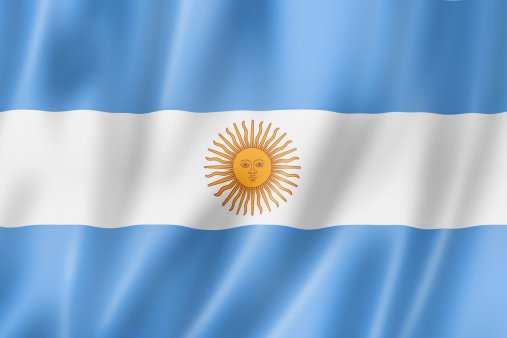