The Orlando flag is a two-color horizontal flag in white and blue, deflected by a beautiful image of the Linton E. Allen Memorial Fountain in the center.

The bottom blue bar occupies one-third of the vertical length. Around the fountain is a golden image of the sun in the shape of the letter “O”.

Part of the sun is divided on the blue bar by four thin blue strips, creating sunlight on the waves.

The city had a previous flag. The first flag, like the current flag, was created through a design contest. The competition was sponsored by the Arts and Sciences Council as well as the Orlando Kiwanis Club.

It was approved by the city council on June 2, 1980, and continued to be used until the new plan was approved.

Both the previous and current Orlando flags were horizontal from white and blue, but in the first city flag they were the same size. The flag consisted of two palm trees, two unknown buildings and the fountain of Lake Eola in its center. Other buildings could be seen behind the fountain.

At the bottom of the flag was written “CITY of ORLANDO” surrounded by light blue. And the flag had a bright yellow-orange semicircle behind objects in the foreground.

This flag was redesigned and approved to mark the 142nd anniversary of the city’s birth. The flag redesign competition started on February 15, 2017. Also, the Orlando City Council has set aside a four-month period for public discussion and discussion of the committee.

The submission process lasted from February 15 to March 22. Each person can submit a maximum of three designs but must be sent by traditional mail or delivered to one of seven accepted locations.

The city has received more than 1,100 submissions from at least seven countries, twelve states and five local schools. The flag was selected from the final list of candidates and approved on July 24, 2017. When voted on by the city council, all but one commission voted in favor of the flag.

During the redesign process, the city council met at least six times, during which the council was reportedly involved with 23,000 people through social media and at least 500 residents.

The flag was designed by Tim Eggert, a professional graphic designer and a graduate of the University of Central Florida. The first flag-raising was at 1 p.m. in front of Orlando City Hall, during which the mayor, Buddy Dyer, accompanied the city commissioner.

The white and blue background represents patriotism, perseverance and peace. Yellow represents sunshine, hope and happiness. The fountain of Lake Eula was chosen as a distinctive and recognizable symbol of the city, and its flowing water represents energy and continuous innovation.

The base of this spring is divided into six equal parts, which represent the six areas of the Orlando Commission. The yellow ring – in the shape of the letter O – symbolizes unity, connection, and timelessness. The blue bar also represents water, and the yellow sunlight reflected on it symbolizes the city’s careful attention to the past and its bold vision for the future.

Orlando is a city in the US state of Florida and is the headquarters of the city of Orange. Central Florida is the capital city of Orlando, which has a population of 2,509,831, making it the 23rd largest metropolis in the United States, the sixth-largest metropolis in the region, according to the July 2017 U.S. Census Bureau. South America and Florida’s third-largest area in Florida.

The history of Orlando dates back to 1838 and the height of the Seminole Wars. The U.S. military built Fort Gatlin, south of what is now Orlando, to protect immigrants from Indian attacks.

By 1840, a small community had grown up around the castle. It was the Jernigan, after the Jernigan family, who established the first permanent settlement in the area. Jernigan had a post office, established May 30, 1850.

Six years later, as the town expanded north, the community officially changed its name to Orlando. In 1857, the United States Postal Service approved the name change. The city of Orlando was home to 85 people in 1875, 22 of whom were eligible voters.

Where the history of Orlando’s name comes from is not so clear. There are four stories. One of them is Judge James Spear, who worked hard to get Orlando as the county seat, naming Orlando after the man who once worked for him. Another is that Spear named it “As you Like It” because of a character from Shakespeare.

The third version has Mr. Orlando on his way to Tampa with a caravan of cows. He is said to have fallen ill, died, and been buried, and people can pass by and say, “Orlando is there.”

The final theory is about a group of conscripts at the height of the Seminole Wars. After fighting again with the Indians in the swamps east of Lake Mini (now Cherokee), troops stationed there for the night. The Orlando Reus Sentinel was guarding the camp when he saw a wooden tree floating toward him.

Recognizing the Indian disguise and wanting to warn his fellow soldiers, he fired his gun. When the Indians came out to ambush the camp, he shot the poor people.

The Indians pushed back again, and the southern side of Lake Eula was to bury Orlando Reeves.

Orlando is a large industrial and advanced center. The metro region has a $ 13.4 billion tech industry that employs 53,000 people. It nationally recognized set of innovations in digital media, agricultural technology, aviation, aerospace, and software design.

More than 150 international companies, representing about 20 countries, have facilities on the Orlando Metro.

With more than 1,025 acres (4.15 square kilometers), Orlando has the 7th largest research park in the country, Central Florida Research Park. It houses more than 120 companies, employs more than 8,500 people, and is the center of the country’s military simulation and training programs.

Near the end of each year, the Orange County Convention Center hosts the world’s largest modeling and simulation conference: the Inter-Service / Industry Education, Simulation and Training Conference (I / ITSEC). Metro Orlando is a simulation purchase order for Army, Navy, Air Force, Marine Corps, and Coast Guard.

Orlando’s geography is mostly wetlands, which made up of many lakes and swamps. The ground is usually flat and makes the ground relatively low and wet.

This area is full of hundreds of lakes, the largest of which is Lake Apopka. Central Florida bedrock is mostly limestone and is very porous. The Orlando area is in danger of collapsing.

Probably the most famous pit accident occurred in 1981 in Winter Park, a town just north of downtown Orlando called the Winter Park Pit.

There are 115 neighborhoods within the city and many non-commercial communities. The outskirts of Orlando look like a checkered board, with pockets of the non-corporate orange county surrounded by the outskirts of the city. This arrangement allows some areas to serve by Orange County and the City of Orlando.

This also explains the relatively small population of Orlando compared to its metropolitan population.

Wed Feb 3 , 2021
The Houston Flag is the official flag of the city of Houston. The flag consists of a large white five-pointed star on a blue background with the city sealed inside the star. This flag was adopted in 1915. History In 1915, Mayor Ben Campbell decided that Houston should have its […] 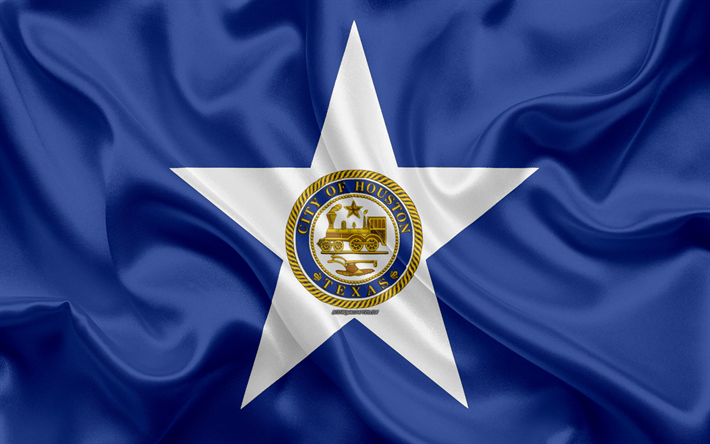