The  NYC  flag, related flags in the Bronx, Brooklyn, Manhattan, Queens, and Staten Island counties, and flags of some city offices. The NYC flag is in three vertical colors: blue, white, and orange, and is charged in blue in the center bar with the New York City seal.

The tricolor design is taken from the flag of the Republic of the Netherlands the Prince’s flag – which was used in 1625 in New Amsterdam.

For the first few hundred years of its life, New York City lacked an official flag or seal. By the end of the 19th century, the city was carrying an informal flag with a round blue seal on a white background.

In 1914, on the occasion of the 250th anniversary of the installation of the first mayor under British rule, the City Arts Commission appointed a committee to create the city’s first official seal and flag.

The committee consulted with the New-York Historical Society to examine the historical seals used by the Dutch and British city governments to include their symbol in the New City seal and flag.

The current design dates back to December 30, 1977, when the seals were skillfully modified. History changed from 1664 (when the British took over) to 1625.

The change was proposed by Irish-born city council chairman Paul O’Dwyer to emphasize the Dutch contribution to the city’s history and downplay the British heritage.

Also, the choice of history was controversial at the time. One of the assistants to the first deputy mayor, James A. “In researching the validity of this proposal, I found no basis for 1625 as the founding date,” Kavanagh concluded.

An aide to the then-mayor of Abe Bayam stated that 1624 is a more accurate date, as the city was in fact chartered as a Dutch legal entity. “You should be surprised if they did not just choose 1626 or 1625 to defeat Boston, which settled in 1630,” said author Edwin J. Burroughs.

Blue, white, and orange refer to the colors of the historic Dutch flag. Orange is the color used by the Dutch after their leader William I, Prince Orange. The committee’s report stated that “the arrangement follows the method of placing the darkest bar next to the staff in three colors: French, Belgian and others.”

New York City is the most populous city in New York State and the United States of America, consisting of five counties including the Bronx, Brooklyn, Manhattan, Queens, and Staten Island.

This city is one of the cultural, political, and economic hubs of the world. Some have called New York the “Capital of the World” because of its unique political, economic, and cultural importance.

New York called New Amsterdam until 1664. With an area of ​​8683 square kilometers, New York City is the largest city in the United States and the largest urban area in the world.

Among the world’s major cities, New York’s GDP is among the highest, which in terms of nominal value alone can be compared to a large country like Russia.

With more than 53 skyscrapers over 200 meters high, New York City has the largest number of skyscrapers in the world. The Freedom Tower is the first building to be built on the site of the World Trade Center in New York.

According to 2007 figures, New York has a population of about 20 million, including the suburbs. The New York City Train, opened in 1904, is the longest subway line in the world. The New York Stock Exchange is the world’s largest dollar-denominated stock exchange located on Wall Street.

The United Nations headquarters in New York City, as well as the Statue of Liberty, is the most important symbol of the United States of America in New York.

The outbreak of World War II paved the way for New York to flourish. Following the ban on artistic creation in European dictatorships, artists fled to the West.

The United States remained a major art form until the late 1970s and World War II. Also, widespread devastation throughout Europe led to new and stray capital and labor. Which led to the economic development and prosperity of New York’s industries and factories.

In 1952, the city became practically the most important city in the field of international diplomacy.

In the years that followed, the city witnessed historic events, with New York.

The World Trade Center was the main target of the 9/11 terrorist attacks. Which in the following years also had an impact on global relations.

As the Wall Street Journal published in the city. In 2017, New York City’s gross domestic product alone was $ 1.73 trillion.

“Culture seems to be in the air, like part of the air,” author Tom Wolfe said in describing New York.

Many important American cultural movements began in the city, such as the Harlem Renaissance.

It became the center of stand-up comedy in the early 20th century, jazz in the 1940s. Punk and hardcore scenes were influential in the 1970s and 1980s. New York has long had a flourishing stage for American Jewish literature.

It is the birthplace of many cultural movements, including the Harlem Renaissance in literature and the visual arts. Abstract Expressionism (also known as the New York School) in painting; And hip-hop, punk, salsa, freestyle, Tin Penn alley, certain forms of jazz, and (with Philadelphia) disco in music.

New York City is the dance capital of the world. It also has many places for novels, movies (see list of New York City movies), and TV shows. New York Fashion Week is one of the most prominent fashion events in the world.

The forward erosion (and subsequent retreat) of the ice led to the separation of Long Island and Staten Island. It also laid the bed at relatively shallow depths and provided a solid foundation for most Manhattan skyscrapers.

New York City located in the northeastern United States, in the southeastern state of New York.

The location at the mouth of the Hudson River helped the city become important as a commercial port. Most of New York City is built on the three islands of Long Island, Manhattan, and Staten Island.

The land of this city has changed with the intervention of humans with significant intervention in the land of waterfronts. The revival in lower Manhattan is most prominent with developments such as Park City Battery in the 1970s and 1980s.

Some natural relief equated in topography, especially in Manhattan.

Flag of the Commonwealth of Australia

Tue Jan 26 , 2021
The Australian flag is based on the British Blue Ensign – a blue background with the Union Jack flag in the upper canton or upper neighborhood – reinforced with a large white seven-pointed star (Commonwealth) and a facade. From the constellation of the Southern Cross, consisting of five white stars […] 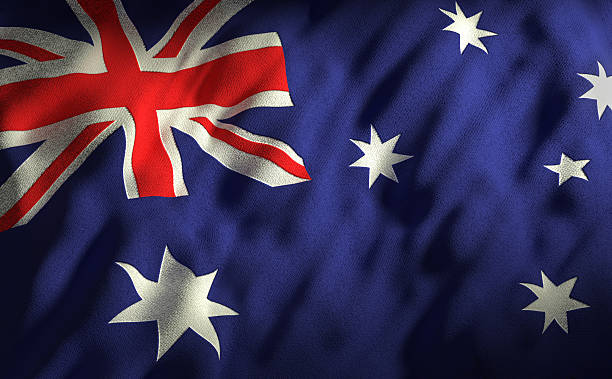