The North Korea flag was formed on September 8, 1948. The red star on the flag is a symbol of communism. The flag formed in 1948 when North Korea became independent as a communist state. This flag consists of two colors, blue and red in the background.

After the defeat of the Japanese at the end of World War II, the northern part of the Korean Peninsula was occupied by Soviet forces in 1946 and a temporary People’s Committee established for North Korea.

They designed a flag with the modified Tauk symbol and from top to bottom to the bottom left, the symbols of paradise, fire, water, and the Taoist earth. This flag is similar to the current flag of South Korea.

The selected North Korean flag was very different from the previous design. It had a white and blue border with a red stripe  And inside the center, the bar is a white disk with a Soviet red pentagonal star. This is the current flag of North Korea that we see today.

The meaning of the North Korea flag

The North Korean flag was the national flag on September 8, 1948. The red star on the flag on a white circle indicates that the northern government is communist.

The flag was adopted as the flag of North Korea when the northern part of the Korean Peninsula declared itself communist.

The old Korean flag consisted of blue, red, and white. North Korea retained the three colors on its flag and made it more prominent in red. He also added a red star to the white circle.

The white circle represents the taguk (red and blue circle on the South Korean flag) and symbolizes the contrasting elements of nature. The red ribbon represents revolutionary traditions.

And the symbol of communism is the red star. Also, two blue ribbons symbolize independence, peace, and friendship. And the two white stripes are a symbol of integrity and purity.

A 270-kilogram North Korean flag hoisted from the top of a 160-meter-high bar. Located in Kijong Dong, on the border between South and North Korea (in North Korea), it is the third tallest flagpole in the world.

The color of the Korean flag is red, white, and blue – the national colors of this country. The flag has a wide red stripe in the center. That reflects the revolutionary traditions of the nation.

On both sides of the red bar there are thin white stripes that indicate purity.

There are also two blue ribbons that are said to symbolize unity. At the top of the red bar is a red five-pointed star in a white circle. Although this is believed to be a political sign, others say it is simply the country’s traditions.

Other flags used by North Korea

The Flag of the Korean People’s Army Groundforce

The Korean Army flag bears the national emblem and has darker blue stripes and the Korean People’s Army emblem at the center.

The Korean Air Force and Anti-Aircraft flag show the army logo in the center of the sky blue square with a thick dark stripe at the bottom with three thin dark blue lines at the top.

This flag has the KPA logo embedded in the dark blue background.

The Democratic People’s Republic of Korea

North Korea, officially known as the Democratic People’s Republic of Korea (DPRK), is a country in the northern part of the Korean Peninsula in East Asia.

Its capital and largest city are Pyongyang. It shares borders with South Korea to the south, the People’s Republic of China to the north, and Russia to the northeast.

Korea made great scientific and cultural progress in the fifteenth and 16th centuries.

Japan invaded Korea in 1592, but the central government of Korea, with the help of the Chinese, repulsed the Japanese invasion and in early 17th century Korea came under Chinese rule.

After the Japanese victory in the first war with China in the nineteenth century and in the war with Russia in the early 20th century, Korea came under Japanese domination.

The Korean emperor wanted to send a delegation to The Hague to free his country from Japanese influence but was forced to resign upon discovering this.

In 1910, Korea officially joined the Empire of Japan. During the Second Sino-Japanese War and World War II, the foundations of Japanese influence in Korea weakened, and in 1942, Korean pro-independence forces declared war on Japan.

Following the historical events of this country and February and January 1945, Korea was divided into northern and southern parts. The northern part was occupied by the Russians and the southern part by the Americans. Circuit 38 was also designated as the boundary between the two spheres.

A ceasefire was declared in 1953, but much damage was done to both countries during the war.

After the end of the war, the North Korean government, using the country’s abundant resources, launched extensive programs to industrialize and rehabilitate the country, and in the process, with the help of the Chinese and Russians, railroads and factories were rebuilt.

The people of North Korea

The population of this country is about 25 million and 370 thousand people with an average age of 35 years. Life expectancy is 75 years for women at birth and 69 years for men.

The people of this country are traditionally followers of the Buddha. The official language in this country is Korean.

The press, radio, and television are run under the full control of the government and there is severe censorship.

North Korea covers an area of 120,568 square kilometers (the 93rd largest country in the world) and is about half the size of Britain.

It is located in the Northern Hemisphere in East Asia, on the west coast of the Sea of Japan and east of the Gulf of Korea, and in the neighborhood of South Korea in the south, China in the north and northwest, and Russia in the northeast.

North Korea is a mountainous country where mountains are more or less scattered throughout the plains, and plains are mostly located on the west coast as well as in some areas of the east coast.

Its climate is temperate in the northern regions and hot and humid in other regions. Mount Petko (2,744 m) is its highest point, and the Yalu River (800 km) is the longest river in North Korea.

Flag of the Republic of Maldives

Wed Sep 9 , 2020
The Maldives flag was adopted by the country in a ratio of 2: 3 on July 25, 1965. The flag has a red background with a large green rectangle in the middle and a white crescent moon vertically facing the green section of the flag in the middle of this […] 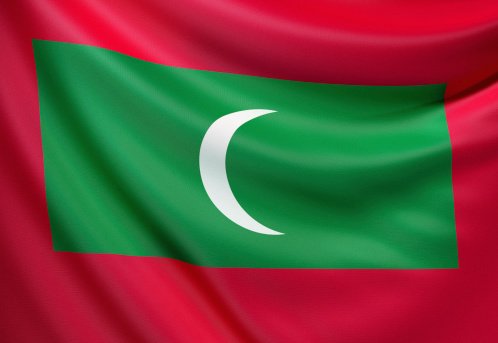