History the flag of Nigeria

The current National flag is three stripes flag that each of the stripes—green, white, green—vertically stands next to each other.

Nigerians’ endeavor for gaining independence, resulted in the National Planning Committee. They decided to announce a competition for the design of a national flag for the country.

After they received 3000 thousands of entrees, they chose Michael Taiwo Akinkunmi’s design. The current flag is based on his design but the National Planning Committee brought a slight change to the flag.

On the middle white stripe of the first version of the flag, there was a red quarter sun that the national planning committee omitted to make the simple current national flag.

The current flag of Nigeria become the official national flag of the country on October 1, 1960—the independence day. Before independence, Nigeria was one of the protectorates of the United Kingdom.

Other flags of Nigeria associated with different governmental entities are as follows:

Later in 1953, the imperial crown in the Star of David changed to St Edward’s Crown.

When Southern Nigeria and Northern Nigeria were intermingled, Nigeria adopted the blue ensign of the British Empire as its national flag.

He suggested this flag because of the Seal of Solomon was associated with the native Igbo Jews of Nigeria. However, the flag was not accepted for some of the Nigerians.

For instance, Fela Kuti refused to salute the flag.

In 1956 some Nigerians Muslims torched Nigerian Blue ensign at Mecca in Saudi Arabia because of Star of David which is a symbol of Jewish.

Typically, culturally diverse countries use a simple design flag to avoid any misunderstanding in the representation of different cultures and sub-cultures. The flag is also simple.

About the Federal Republic of Nigeria

The Federal Republic of Nigeria—located on the west coast of Africa—shares land borders with Niger, Chad, Cameroon, and Benin. However, its southern border is in the Atlantic Ocean.

This country is rich with natural resources especially large amounts of petroleum and natural gas. The diverse climate of Nigeria ranges from arid to humid equatorial.

Around the 19th century, Nigeria was a protectorate of the British Empire. There were southern and northern Nigeria.

Lord Frederick Lugard, a British Colonial administer of was the last governor of Nigeria, joined both of them which shaped current Nigeria. It was British that created the administrative organization and legal framework.

After Nigeria officially became an independent federation in 1960, this country engulfed in civil war for 3 consecutive years.

In 1999 Nigeria politically became stable and the first democratically power transition happened in the 2015 presidential election.

Nigeria is a multinational country and the freedom of religion is institutionally ensured. More than 250 ethnic groups with Over 500 hundred distinct languages including English live in this country.

Not only Nigeria is the largest country in Africa in terms of population but also the economy. Due to the most populous and biggest economy in the entire African Continent, Nigeria is also called “Giant of Africa”.

2 thoughts on “Flag of the Federal Republic of Nigeria”

Flag of the People’s Democratic Republic of Laos

Tue Jul 28 , 2020
The flag of Laos is a triband—red, dark-blue, and red—flag with a white disc on the middle blue stripe. The middle stripe is twice as big in width size as the two other bands in the flag of Laos. It’s a rectangular flag with a ratio of 2:3. The short-lived […] 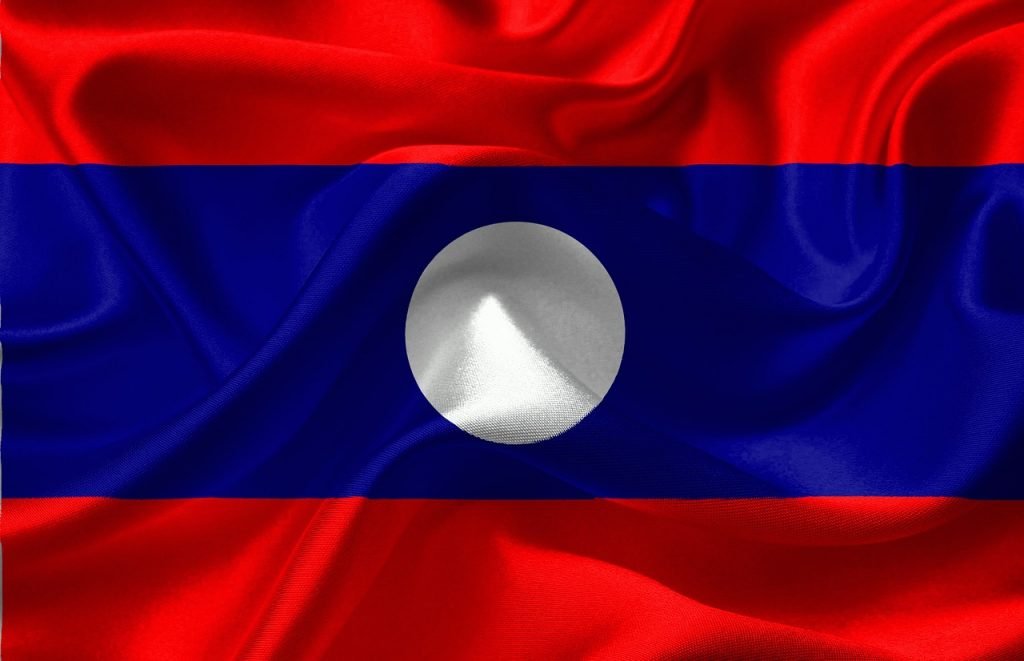