On March 21, 1990, the Namibia flag was recognized, with independence from South Africa.
The flag has a red diagonal band with a white edge that radiates diagonally from the lower corner of the lift. blue with a golden sun with 12 triangular rays is the upper triangle and the lower triangle is green.

The Namibian Constituent Assembly approved the final design of the flag on February 2, 1990. The flag unveiled On March 9, 1990, and three designers were recognized by the Chairman of the Flag Selection Committees.

The Namibian flag has two triangles separated by a diagonal band between them. The upper triangle is blue and the lower is green. The diagonal stripe between them is red and borders on white.

From the bottom corner of the elevator to the opposite corner of the flag is pulled. The upper triangle has a golden sun with 12 triangular rays radiating from four sides.

The colors and symbols of the flag all have their own meaning. Blue is a symbol of the sky and the ocean, both of which play a vital role in the welfare of the country.

The red color indicates the people of the country, their courage, and determination to achieve an equal opportunity for all in the future. The white color in the flag is a symbol of unity and peace.

Green shows the agricultural wealth and vegetation of the country.

Red-Namibia’s most important source is its people. It refers to their heroism and determination to build a future with equal opportunities for all.

Green – a symbol of vegetation and agricultural resources.

Blue – Represents the clean sky of Namibia and the Atlantic Ocean, the country’s valuable water, and rain resources.

The Republic Of Namibia

Namibia is a country in southern Africa, that has a border with the Atlantic Ocean. It has borders with Angola and Zambia to the north, Botswana to the east, and South Africa to the south.

It also has a slightly less than 200-meter-long border with Zimbabwe from the east. its capital is Windhoek and this city is the most populous city in the country.

This country is a member of the United Nations, the African Union, and the Commonwealth of Independent States. The official language of this country is English and its population is 2.6 million.

The currency of this country is the Namibian dollar. Eighty-five percent of the population is Christian, and the remaining 15 percent follow indigenous religions

Nearly 2,000 years ago, present-day Namibia was the home of the Sunni people, after which the people migrated to Namibia in 1600 AD whenever they spoke Banton.

Today, most of the people of Namibia are Ovambots, who immigrated to Namibia in the 1800s.

In the late 15th century, the Portuguese sailor Bartolomo Diaz became the first European to visit Namibia. Namibia used to be called Southwest Africa. The region became a German colony in 1884.

Between 1904 and 1908, German forces massacred tens of thousands of members of the Herro tribe, who were killed because they had revolted against German colonization.

In 1915, with Germany involved in World War I, South Africa seized the opportunity to seize Namibia. In 1921, Namibia was ceded to South Africa as a United Nations-administered territory.

The black Marxist separatist group, known as the Southwestern African People’s Organization (SWAPO), was formed in 1960 with the aim of helping this small-scale insurgent group achieve independence.

In 1966, the United Nations once again warned South Africa to secede from the region, but again South Africa did not fall.

In 1974, a UN resolution called for the transfer of Namibian power from South Africa to the United Nations.

South African Prime Minister Balthazar Worcester rejected the resolution, saying his government was ready to negotiate for Namibia’s independence but not with Swapo. The United Nations later recognized Swapo as the legitimate representative of the Namibian people.

In 1985, after the overthrow of the government and the dismantling of apartheid and multi-ethnicity in South Africa and the installation of a new government in the country.

Although Namibia is a large country, it has a small population due to its desert nature.

The population of Namibia is 2 million 88 thousand 669 people with an average age of 20.7 years.

Namibia is a country in South Africa. The location of the western border of this country has been studied by the Atlantic Ocean.

It has borders with Angola and Zambia to the north, Botswana to the east, and South Africa to the south.

the capital is Windhoek of Namibia and it is the most populous city in the country.

It is on the United Nations list on the African Union and is also on the list of Commonwealth countries.

Namibia is located in southern Africa and northwestern Botswana and covers an area of 825,615 square kilometers. The most important cities in this country are Wallis Bay as well as Rondo.

According to the divisions made in this country, there are 14 provinces, which include 121 cities.

3 thoughts on “Flag of the Republic of Namibia”

Flag of the nation Burkina Faso

Sun Sep 20 , 2020
The Burkina Faso flag is a symbol of the nation of Burkina Faso and its solidarity with other African countries. It is one of only two flags to represent the country since gaining independence from European influence in the second half of the 20th century. The current Burkina Faso flag […] 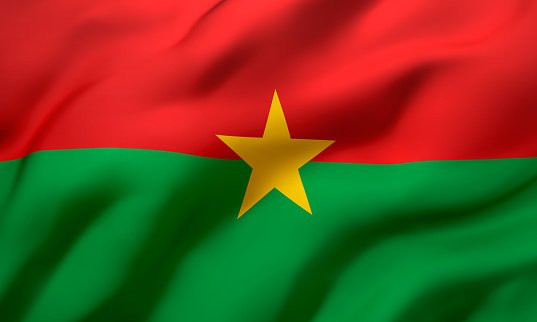