The Morocco flag consists of a red part with a green pentagram or”Solomon’s seal”.

in 1915, the symbol was added to the flag to distinguish it from the flags of other Arab nations.

Green and red are the traditional colors of Islam and red have been on the Moroccan flag since the 16th century. Red has symbolized the blood relationship between the Prophet Muhammad and the king, but it is sometimes a symbol of the nation’s freedom.
Until 1956, Morocco was a French colony, but Morocco created its flag during this period.

In traditional Islamic culture, the chessboard is a symbol for theological debate and the victory of Islamic reasoning over other dominant moral frameworks.

The Marinid dynasty, a Sunni Muslim sect of the Berber race, overthrew Almohad. It replaced the chess starboard with an octagonal star and a circle around the edges.

In 1666, the Alawite dynasty took over and still stands today as the current kingdom of Morocco.

The kingdom, which claims to be the descendants of the Prophet Muhammad, decided to remove all logos and hoist a simple traditional red flag for more than 400 years. Red indicates strength and courage.

In the early 20th century, Morocco fell victim to the colonial pressures of Spain and France with the Phase Treaty.

The “agreement” practically disintegrated the country – some parts were booked and occupied by Spain and others by France.

Nominally, the treaty did not deprive Morocco of its sovereignty, because Sultan Abdul Hafid was still the leader of the country, but in practice, he had no real power.

On November 17, 1915, the Kingdom of Morocco adopted the current flag as its national symbol. Although the colonial powers only allowed the flag to be displayed on its borders (and not at sea), it eventually became the flag of independence in 1955.

This flag consists of a red background. Red is one of the main colors of the Pan-Arab era and is with victory on the battlefield. It is a symbol of hardship, courage, strength, and bravery.

It reminds people of the Alawite dynasty (related to bravery), the Yemeni imams, and the sheriffs of Mecca. Both red and green have meanings in Islam. Green is the main color of Islam and represents paradise in the Quran.

However, in the flag, the color green symbolizes hope, wisdom, joy, peace, and love.

Moroccans are very patriotic. As a result, for them, the flag is a symbol of freedom and a reminder of the rich history of the country, its powerful dynasties, and independence.

In the center of the Moroccan flag is a green pentagram. This symbol is a symbol of the five pillars of Islam: martyrs, alms, prayers, fasting, and Hajj.

The emblem is called the Seal of Solomon. Before 1915, this was a 6-pointed star.

Other flags used in Morocco include civil and marine symbols.

The civil emblem is similar to the national flag but consists of a yellow crown and a yellow star in the canton (upper left corner).

The Marine emblem in Morocco is similar to the civil emblem but has a yellow crown and star in all four corners.

The Kingdom of Morocco also uses a sea jack that resembles the national flag but has a swallowtail and a yellow border. The royal standard of Morocco is green and has the central Moroccan emblem.

Moroccan flag with view of Hassan II mosque, Casablanca, Morocco
Moroccan flag in a Street of Casablanca in Morocco
Close-up on a Moroccan Flag waving atop of its pole.
morocco-2548220_640
international-2694689_640

The Kingdom of Morocco

Morocco, officially the Kingdom of Morocco, is a country in northwestern Africa. Morocco has a long coastline with the Atlantic Ocean, which extends north to Gibraltar and the Mediterranean Sea.

Morocco has borders with Algeria to the east, the Atlantic Ocean to the west, Mauritania to the south, and the Mediterranean Sea to the north. It has a population of 36,911,000.

Morocco claims ownership of Western Sahara and has ruled it since 1975. The situation in Western Sahara is still controversial. The capital of Morocco is Rabat.

Morocco was the Carthage Empire, which ruled in North Africa from the Gulf of Sirte to Libya to the Atlantic Ocean.

It fell to the Romans in 146 BC, which was part of Mauritania at the time, and was ruled by Europeans until the seventh century AD (first century AH).

At the end of the first century AH, after the conflict with the Europeans and the Berbers, the Muslims made this area part of their territory and the religion of Islam and the Arabic language spread in it.

The title “Maghrib” was used in ancient Islamic texts, including Morocco, Algeria, Tunisia, and sometimes Andalusia.

In the 15th and 16th centuries, Spanish and Portuguese forces occupied Moroccan ports.

In the 16th century, the Alawite noble local government of Morocco came under Ottoman rule, but in the 17th century Europeans taken over it.

From 1912, Morocco was divided between France and Spain, and colonization began. The Muslim people, especially the tribes in the mountainous areas, revolted against the aggressors led by Abdul Karim Rifi

Note: that you have to take off your shoes to enter the house of a Moroccan person.

The Kingdom of Morocco, known in Arabic as the “Kingdom of the Maghreb”. This country is the first Muslim-formed country in the Maghreb.
In international organizations, including the United Nations, it linguistically called Morocco or Morocco because the word the Maghreb implies the broad meaning of “Greater Maghreb” (including Algeria, Tunisia, and Morocco).
Morocco is the closest African country to Europe, separated by the Strait of Gibraltar. The distance between Morocco and Spain is about 15 km.

The population density is 51 people per square kilometer, the average household size is 4.5, and the annual population growth rate is 1.2%.

The illiteracy rate in the country is about 50% of the population, which is 62% for women and about 38% for men. The unemployment rate in this country is over 22% of the active population.

One thought on “Flag of the Kingdom of Morocco”

Tue Sep 22 , 2020
The current Malawi flag was accepted by the president on July 29, 2010, after the ruling Democratic Party proposed a new flag. The new flag has been prepared by making changes to the arrangement of the colors of the previous flag to match the original layout of the Pan-African flag. […] 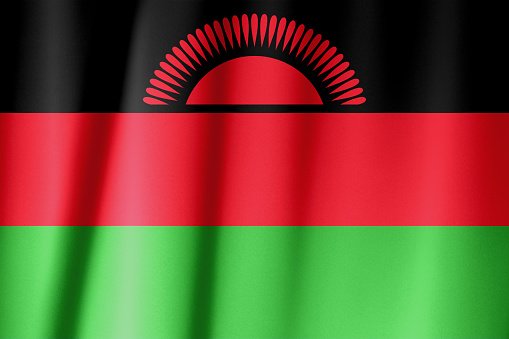