The Libya flag was originally introduced in 1951 following the establishment of the Libyan Kingdom.

The flag, consisting of pan-Arab colors, was approved by Omar Faik Shanbib and by King Idris al-Senussi, who consisted of a UN delegation representing the three regions of Cyrenaica, Fezzan, and Tripolitania in the UN deliberations.

The flag was abolished in 1969, but was subsequently approved by the National Transitional Council and anti-Gaddafi forces, and was used as the national flag in Article 3 of the draft Charter of the Libyan Constitution for the transition phase, issued on 3 August 2011.

After gaining independence in 1951, the Kingdom of Libya adopted the flag that is used today.

The flag with red, white, and black colors is very similar to the Arab Liberation flag.

Libya joined the Federation of Arab Republics in 1972, in an attempt to unite Libya, Syria and Egypt to form a united Arab nation, and as a result, the then flag was adopted to link the country to Syria and Egypt.

In 1977, the country changed its name again to Libyan Arab Socialist Republic and a new flag was adopted. Former Prime Minister Muammar Gaddafi and then Secretary-General of the People’s Congress coined the name Jamahiriya to mean “state of the masses.”

The green flag is the only flag in the world with a green color that has no other details like a symbol or any other design.

Colonel Gaddafi chose the flag to represent his ideology and philosophical thinking. This color was dominant for the religion of Islam and the third style of world theory, expressed by Gaddafi’s Green Book.

In 2011, after Gaddafi ousted, the previous flag used between 1951 and 1969 was re-approved by the National Transitional Council, making France the first country to recognize the new government and the first to allow staff at the Libyan embassy.

The Libya flag has a triple horizontal design of three different colors.

These colors are also to show the history and characteristics of the country. In the next section, we will explain in more detail about each color and what it symbolizes.

In the center of the crescent are the white moon and a five-pointed white star. According to a pamphlet distributed by the Ministry of Information and Guidance of the Kingdom of Libya, the crescent moon has been chosen as the symbol of the beginning of the lunar month according to the Muslim calendar. The star represents the hope and end of darkness in the nation.

The Libya flag has a triple horizontal design. A red band is at the top of the flag, while a green band of equal size is at the bottom. In the center of the flag is a black band that is twice as high.

The color red was chosen to represent the bloodshed in the struggle for the freedom of the nation. The color black symbolizes the dark days when the region is occupied by Italy.

Finally, the color green represents the wealth, prosperity and agriculture of the country.

The crescent moon and the five-pointed star in the center of the flag are both white.

Crescent stands for Islam, which is the dominant religion in the country. The crescent also represents the lunar month in the Islamic calendar, which according to Islam is reminiscent of the epic journey of Muhammad.

This star is a symbol of the smiling hope of the Libyan people, the body, the light and the beauty, the trust in God, and the pride that lights the way and puts an end to the darkness.

The government of Libya

Libya, officially the government of Libya, is a country in North Africa in the Arab Maghreb south of the Mediterranean Sea. Libya is bordered by Egypt to the east, Sudan, Chad, and Niger to the south, and Algeria and Tunisia to the west.

The capital and largest city of Libya is Tripoli, home to 1.7 million Libyans. The official language of Libya is Arabic and its currency is the Libyan Dinar.

Initially, Libya was inhabited by Berber tribes. After 1000 BC, a Phoenician from Lebanon settled in Tripoli (western Libya).

They founded Tripoli. The ancient Greeks later settled in Cyrenaica (eastern Libya). Both regions of Libya later became part of the Roman Empire.

A Roman emperor named Septimius Securus (1911-211) was a native of the large Libyan city of Leptis Magna.

In 431, the Germans, known as the Vandals, occupied Libya, but Justinian, emperor of the Eastern Empire, forced them to leave in 533.

The Turks surrendered Libya to Italy in 1912. However, the resistance of the Libyan people continued for years. Until 1922, the Italians controlled only the coastal area.

The conquest of Libya by fascist Italy was very brutal and as a result many Libyans lost their lives.

Mussolini, the dictator of Italy, encouraged Italians to immigrate to Libya, and by 1939 there were 150,000 people living in the country.

In 1940, Italy joined World War II on behalf of Germany, and Italian forces based in Libya, Egypt, fought Britain. However, in 1943, the British occupied Libya. After the war, Libya came under British and French control.

With the 1947 peace treaty, Italy renounced its claim to Libya. Then in 1949, the United Nations declared that Libya should become independent by January 1, 1952. The constitution was drafted for Libya and Mohamed Idris al-Sanosi was elected king. King Idris, I declared Libya independent on December 24, 1951.

Initially, Libya was a poor country. However, Libya changed forever in 1959 with the discovery of oil. Oil brought new wealth to the country, and in the mid-1960s Libya was one of the most important oil-producing countries in the world.

However, on September 1, 1969, a group of army officers led by Muammar Gaddafi staged a coup in Libya.

The monarchy became obsolete. Gaddafi became dictator of Libya and remained in power for 42 years.

In 1984, Britain severed diplomatic relations with Libya after a female police officer was killed outside the Libyan embassy in London. In 1986, a bomb exploded at a German nightclub. The United States believed that the Libyans involved, so they bombed Libya.

In 1992 and 1993, it imposed UN sanctions on Libya for its involvement in the 1988 destruction of a passenger plane over Lockerbie.

Meanwhile, in 1999, the Italian government apologized for the brutal conquest of Libya decades ago.

However, in 2011 a revolution took place in Libya and Gaddafi was killed.

In the early 21st century, Libya was still dependent on oil. Libya still has vast reserves of oil. However, Libya suffered from high unemployment. In 2020, Libya has a population of 6.8 million.

According to 2001 statistics, about 1.3% of the population infect with AIDS.

Common languages in this country include Arabic, English and Italian.

78% of Libya’s population lives in cities.

The culture of Libya is such that you can achieve good results economically. In the culture of this country, one can both enter university and make good progress in the career path.

Of course, the culture of the Libyan people is that they know science better.

Of course, the cultural path in Libya has been followed in certain categories. In this country, the government has tried to popularize the culture of urbanization.

Libya is an Arab country located on the African continent. Egypt, Sudan and Niger are its neighbors and share a land border.

Libya is the fourth largest country on the African continent, with 90 percent of the country being a hot desert. There is a lot of grass in this country.

4 thoughts on “Flag of the government of Libya”

Sat Dec 12 , 2020
The Utah flag was adopted in February 2011 and consists of the Utah seal encircled in a golden circle on a dark blue background. This flag replaced the previous one, albeit almost identical to the one used since 1913. The most important element in the Utah flag is a beehive, […] 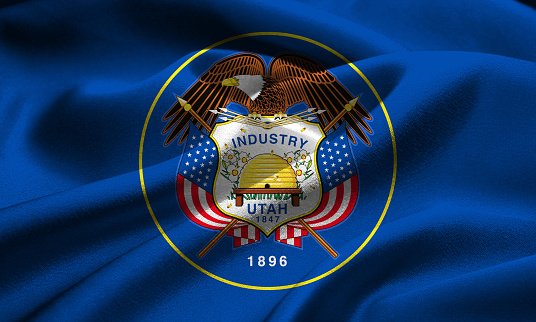