The Kuwait flag was first recognized in 1961. It is known as the civilian flag and the flag of the province and the national emblem and also has a ratio of 1: 2. This flag is composed of four colors red, white, green, and black.

History of the Kuwaiti flag

Kuwait used a simple red flag with a crescent and a star during the Ottoman rule (Turkish Empire) Prior to 1899, also in this year Kuwait and Britain signed a secret agreement between Britain and Kuwait.

The agreement was that Kuwait would not accept foreign delegates and that they would not sell, rent, lease, or mortgage any of their lands without the consent of the British.

Instead, the British protect the territorial integrity of Kuwait from any threat. Also in this time, Kuwait used a red flag with a five-pointed star, a crescent moon, and Arabic text for Kuwait. In 1909, they made the crescent moon and star bigger.

They also moved the Arabic text to the right of the flag. However, in 1914, a friendly fire broke out in the Shatt al-Arab River during the Mesopotamian war, and it was time for Kuwait to change its flag.

In 1915, the star and crescent moon were removed and the text moved to the center and enlarged. On the left, a wide white bar was added.

After declaring Kuwait an independent sheikhdom under British protection, the sheikh added martyrs to the flag after 1921.

The flag with the Kuwaiti Arabic inscription and the letters of the martyrs was parallel to the red mast.
You read this text: “ilāha ʾillā-llāh, muḥammadun rasūlu-llāh” means: “There is no god but God, Muhammad is the messenger of God.”

They used the flag until Sheikh added the unique logo of the Sabah family and used it until 1956.

They also used the flag on the Kuwaiti emblem. Later in 1956, they passed a new red flag with a white wavy stripe on the left.

The flag was also added in Arabic by Shahada. In 1961, the country adopted a pan-Arab flag that is still used today.

This flag has green-red-white colors in three horizontal colors and a black trapezoid on the elevator side.

The meaning of colors is derived from a poem by Safi al-Din al-Hali. He wrote about the Arab green fields, purity of deeds and blood on their swords, and their black battles.

So the symbol of colors is: white to apply them. Black for battles; It is green for the lands and red for their swords.
the shape
The Kuwait flag includes a horizontal tribe of green, red, white, and a black trapezoid on the lift side in a 1: 2 ratio.

Interesting facts about the Kuwaiti flag

The government of Kuwait

Kuwait, officially the government of Kuwait, is a country in West Asia. Kuwait has land borders with Iraq and Saudi Arabia and water borders with Iran via the Persian Gulf. Its capital is the city of Kuwait.

The official language of this country is Arabic and its currency is the Kuwaiti Dinar.

The original inhabitants of Kuwait were a group of Atari tribes living in Central Saudi Arabia. In the past, Kuwait was a place similar to ordinary Arab settlements, protected by a small fort.

Later, this place quickly became important and the former Arabs living there strengthened their position against the aggressions of the Khalid clan, which at that time had power and influence on the northeastern coast of Saudi Arabia, by forming alliances with neighboring tribes and clans.

The history of the construction of Kuwait goes back to Sheikh Barak ibn Gharir al-Hamid, the sheikh of the Bani Khalid tribe and the ruler of the Emirate of Ehsa, who built a fort called Kut in late 1110 AH to store food and also store weapons, which was later named Kuwait.

Then this city was given to the Al-Sabah family during the reign of Sheikh Saadoun bin Muhammad Al-Hamid.

The non-Kuwaiti population living in this country also lives mostly in the (surrounding) province.

The people of Kuwait are Arabs and of Semitic descent, and among them are other Arab races such as the Adnan’s (the first nomadic group from Najd to this land in the Anza tribe) and the Qahtanis.

The official language of Kuwait is Arabic. In addition, English is of special importance as a second language due to the history of the British presence in this country as well as the presence of the United States.

In Kuwait, Islam is the official religion and almost all the people of this country are Muslims and with the exception of 30% of the Shiite population, the rest are followers of the Sunni religion, most of whom are Maliki.

In addition, about 4 percent of Christians of other faiths live in Kuwait. The text of the second article of the Kuwaiti constitution states: The official religion of the country is Islam, and Islamic law is the main source for legislation.

In general, the Kuwaiti government tries to implement Islamic rules, and Islamic customs are observed in Kuwait more than other countries in the region, and in addition to government activities, popular Islamic centers are also active in this country.

Kuwait is a vast sandy plain, sometimes with low hills. [9] The maximum height of these hills is three hundred meters.

The northern part of the country is distinguished by a scattered hill. Approaching the coast, these hills take the form of a chain connected along the north coast, which is called “Jan Al-Zour”.

These chain-shaped hills reach a height of about 145 meters and end in the desert of Umm al-Ramm.

There are islands around Kuwait, of which Bobian Island is the largest. It is located in the north of the island of Verbe and at the entrance of Jun Al-Kuwait is the island of Filioque.

Kuwait is of strategic importance due to its location at the extreme northwest point of the Persian Gulf and its proximity to the three countries of Iran, Saudi Arabia, and Iraq, especially as it is located along the narrow sea route of Khor Abdullah and Khor Musa.

The existence of huge mineral resources and the discovery of natural gas reserves in Kuwait are other features of this country.

The coasts and ports of Kuwait are the ultimate ports of the Persian Gulf, which is especially important due to the huge oil resources in this country.

Sun Sep 20 , 2020
The Belize flag was first recognized on September 21, 1981. It is also the civilian flag and the provincial flag and also has a 2: 3 aspect ratio. Some consider the Belize flag to be the first flag depicting a human figure. But some also believe that the Belize flag […] 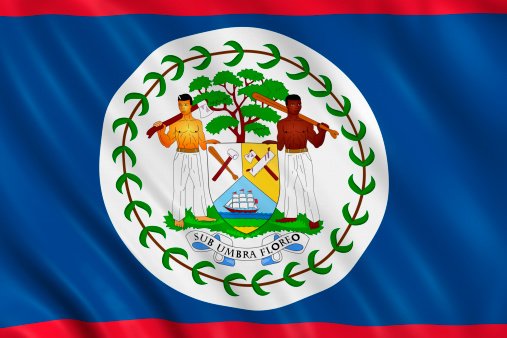