The Kenya flag is in three colors black, red and green with two white edges imposed by a red, white and black mass shield and two crossed spears.

The flag is designed for the flag of the African National Union of Kenya and was officially adopted on December 12, 1963, after the independence of Kenya.

The Kenyan flag has a three-color horizontal design with a central logo. The colors are black at the top, red at the center, and green at the bottom.

There are two white stripes between these three bands. The central emblem of the flag is a Masai shield against two spears.

Black, red and green are the colors of the Kenya National Union of Africa (KANU), which successfully liberated Kenya in 1963.

Black symbolizes Kenya’s African identity, red stands for bloodshed in the war for independence, and the green represents the country’s natural beauty. Masai shields and spears show the importance of that tribe in Kenya.

The colors black, red, and green on the Kenyan flag are also the colors of the World Association for the Improvement of Black and the Union of African Communities (UNIA-ACL), which has led many African nations to independence.

The red, green, and black colors became a symbol of the Pan-African independence movement against foreign occupation.

Kenya has been a British colony since 1888, and its location in the Indian Ocean was crucial to the strategic goals of the British Empire.

UNIA-ACL was founded in 1914 by Marcus Garvey in Jamaica. It was trying to determine the fate of Africans on that continent and African nations around the world.

It was an independence movement and liberation movement across Africa, and Kenya was one of the countries that believed in its principles.

For most of the 1950s, Kenya was the scene of the Mao Mao uprising. This long and brutal conflict was finally contained, but changed the British approach to its former colonies forever.

It also set in motion the processes that eventually led to Kenya’s independence.

The Mao Mao Uprising was led mainly by the people of Kikuyu. The Kikovo are the largest ethnic group in Kenya and one of several groups seeking to represent the Kenyan government.

The Masai people are one of the few remaining nomadic tribes in the world.
Kenya is proud to host this ancient nomadic culture, hence the shield and spear symbol in the center of the Kenyan flag.

Kenya is also one of the most important countries in Africa in terms of wildlife. It has huge protected areas dedicated to maintaining the integrity of the animal population.

These are some of the world’s most endangered species, and the Kenyan government is fighting hard to protect them from poachers. As a developing country, Kenya must balance the needs of its people with its vast natural resources.

Kenya is physically and politically at the forefront of the African continent. As its flag shows, the country has a history of modern independence that is deeply intertwined with African traditions.

The three colors of the Kenyan flag are designed in bright and vibrant shades that give it meaning. This flag is a symbol of national unity and pride of the Kenyan people.

The black color, which appears above, represents the people of the Republic of Kenya.

The low red color in the middle represents the sacrifices and bloody price of freedom for the British colonialists, while the green color at the bottom represents the fertility of the land and the richness of natural wealth.

It represents agriculture and national reserves, which are the backbone of the country’s economy.

The red horizontal bar is located on the white and thin parallel bars at the top and bottom. The white stripes on the flag represent the peace, honesty, and unity of Kenya.

This is a red shield with black sides, 4 white bars, and a white disc in the middle. They represent the traditional cases of the Masai war, which show the enthusiasm and readiness to defend the country.

As a symbol of authority, the Kenyan flag is into the Armed Forces military flag, the Kenyan Air Force, and the Kenyan Navy emblem.
The flags are usually placed in the upper left corner.

There are several types of flags based on their application. All four presidents have a special design of the national flag to reflect the standard of their presidency.

The Republic of Kenya

Kenya is a country in East Africa. Its capital is Nairobi and Mombasa, Kisumo and Nakuru are its major cities.

The government oversees the work of the governorates. The population of this country is 53,771,000.

Eighty-five percent of Kenyans are Christians and 11 percent are Muslims. They speak with two languages Swahili and English.

Recent findings in Lake Turkana show that early humans lived in the same area for some time. Medieval fossils from Kenya have also been found in various parts of the country.

The Mao Uprising in Kenya began in 1952 and lasted until 196. Kenya officially declared independence from the British Empire in 1963. African Parliamentary elections were held in Kenya in 1957.

The first elections to the African Legislature took place in 1975. Britain has stepped into moderate African currents, and the Kenyan African National Union, led by Jomo Kianta, will form a government shortly after independence. One year after Kenyatta, Kenya’s first president will be announced.

The coup was unsuccessful and was planned by one of the Air Force ranks. As it turns out, the revolt was quickly suppressed by loyal forces.

In 2002, Kenya’s elections held under international scrutiny and grew. It is clear that in the political history of Kenya, legislative courses have been seriously pursued.

This area contains various traditions that we intend to explore together. One of the strangest traditions in Kenya is the theft of a bride, in the Lakota tribe in Kenya when a young man is about to marry a woman he needs to steal his future wife.

Parents in this country take this custom seriously and follow it, and a real match is called a match in which the theft takes place one after the other.

In Kenya, there is also a series of festivals called the Khota Festival, which is held by several different tribes, in which boys who have reached puberty have to attend a grueling public ceremony.

Dangerous traditions are also in these celebrations, all of which come form in Kenya.

Pricing on the bride is another important celebration in Kenya, so the bride and groom’s family should discuss the bride price, of course, these negotiations are on paper and the two families must be satisfied with the announced price.

The hijab of Kenya is also clear so that people still wear traditional clothes. The language of Kenya is officially spoken only in urban areas and is used informally by villagers.

Kenya is located in the eastern part of Africa. The area of Kenya is about 582,266 square kilometers. It is the 47th largest country in the world after Madagascar.

The equator crosses the central belt of Kenya, the central and northern and northeastern regions of the country are very dry and hot. Coastal areas are located along the Indian Ocean.

The lowest point in Kenya is along the coast of the Indian Ocean, and the highest point in the country is Mount Kenya, which is 5197 meters high. Kenya has a lot of land.

Kenya has a temperate climate with hot and humid coastal areas. The weather is very dry and hot in the northeastern regions.

4 thoughts on “Flag of the Republic of Kenya”

Flag of the Republic of Namibia

Sun Sep 20 , 2020
On March 21, 1990, the Namibia flag was recognized, with independence from South Africa.The flag has a red diagonal band with a white edge that radiates diagonally from the lower corner of the lift. blue with a golden sun with 12 triangular rays is the upper triangle and the lower […] 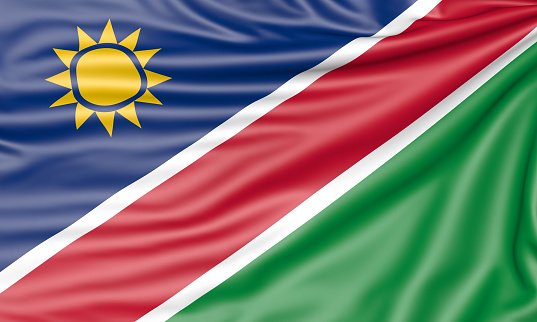