Officially, the flag of Jordan was adopted in April 1928. The history of the Jordan flag stretches back to the Arab revolt against the Turkish Ottoman Empire during World War I.

In the revolt against the Ottoman Empire in 1914-18, Arab nationalists fought to create a single unified and independent Arab state. They fought under the same flag which later becomes the current Jordan flag.

Many Arabic countries involved in the revolt against the Ottoman Empire. These countries were those under the control of the Ottoman Empire that rose against it with the help of some European countries. British and French helped Arabs to topple Ottoman colonialism in most of the Arabic world.

British promised the Arab rebellions to recognize the Single unified and independent Arab state but it didn’t.

In 1916, Sir Mark Sykes, the British diplomat, first proposed Jordan flag’s design for the Arab revolt. He designed the flag out of the Pan Arab colors.

The Hashemite Kingdom of Hejaz located in modern-day western Saudi Arabia existed from 1916 to 1925.

Many Arabic countries’ and independent states’ flags are based on the Pan Arab Colors—Jordan, Kuwait, Palestine, the Sahrawi Arab Democratic Republic, and the United Arab Emirates.

Also, formerly, the colors are in the flag of the brief (six months) union of the Arab Federation of Iraq and Jordan.

The Jordan flag consists of three horizontal stripes which are intersected with a red chevron at the hoist side. The stripes of the flag combined, respectively, like black, white, and green.

Likewise, the red chevron represents Hashemite and the Arab revolt. Besides the three stripes and the chevron, there is also a little white star at the center of the chevron.

The star represents the unity of the Arab people. The star is a seven-point star that each of its points refers to seven verses of Al-Fatiha sura.

Jordan is a Western-Asian country strategically located at the crossroads of Asia, Europe, and Africa. The country has a 26-kilometer coastline on the Red Sea.

Likewise, the Dead Sea is located along with its western broader. Amman is the capital city of Jordan and also the economic, political, and cultural center of the country. At the end of the Bronze Age, three stable kingdoms emerged in this country— Ammon, Moab, and Edom.

Later, the Nabataean Kingdom, the Roman Empire, and the Ottoman Empire ruled the country.

Jordan is a relatively small country with a population of 10 million. Sunni Islam is the dominant religion that makes 95% of the population of the country but also an incongruous minority of Christianity lives in Jordan.

Not only Jordan has been repeatedly referred to as “Oasis of stability” but also it has been a welcoming harbor and haven for refugees.

Since 1948, Jordan has accepted refugees from the neighboring countries in conflict. According to a census in 2015, an estimated 2.1 million Palestinian and 1.4 Syrian refugees live in Jordan.

There are also thousands of Christian refugees who fled ISIL brutality and persecution in Iraq. Jordan is one of the top tourist destination countries. Its high standard healthcare system attracts a big number of medical tourism annually.

It is categorized in “high human development” country and its economy labeled as “upper middle income”.

Flag of the Republic of Albania 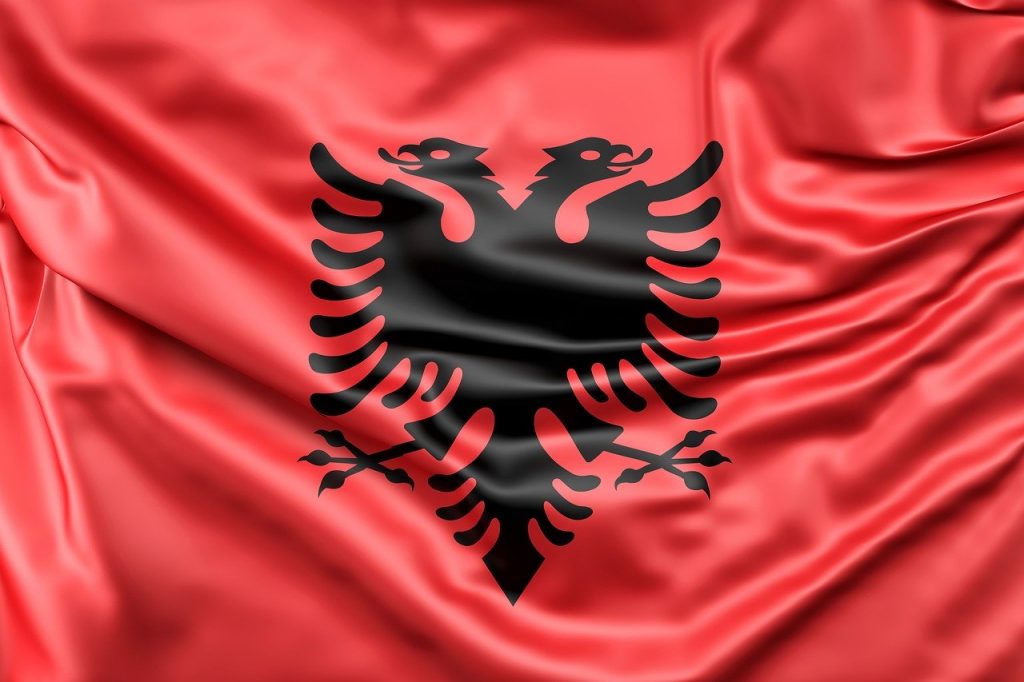