The Indiana flag, the 19th state to adopt the US Constitution, is blue, with 19 stars and a flame symbolizing freedom and intellectualism, and rays that symbolize the state’s remarkable influence.

This Flag was designed by Paul Hadley and officially approved by the state of Indiana on May 11, 1917. It was the state’s first official flag and has remained unchanged since then, except to establish a standard for flag production.

The Indiana Flag (formerly known as the Banner) was approved by the General Assembly in 1917 as part of the state’s 100th-anniversary celebration after a contest sponsored by the Daughters of the American Revolution.

On a blue background, the torch flag represents colored to gold or buffalo, surrounded by an outer circle of thirteen stars and an inner circle of five stars. The torch in the center means freedom and enlightenment and rays show their widespread influence.

The outer circle of stars stands for the thirteen main states and the inner circle of stars for the next five states, which are accepted in the union. Bigger Star stands for Indiana, the nineteenth state. Originally described as the “banner” of the state, it was renamed “Flag” by the 1955 General Assembly.

State Flag “Regulations, in addition to the American flag, apply to all troops in Indiana and to all public office where the state may or may not formally appear.” Mode colors are always carried or displayed to the right of the star and stripes viewer.

There are also 19 stars scattered around the torch, indicating that Indiana is the 19th state member of the union.

Thirteen of these stars are arranged in an outer ring, representing 13 major colonies.

Only two colors are used in the Indiana flag. The background is blue. Torch, letters in “Indiana” and 19 stars are golden.

There are several laws governing the use of the state flag. The flag needs to hoist by all state militias and the Indiana National Guard. It will always be on display at the Indiana State Fair.

The flag must also be displayed at any agency funded in whole or in part by the state government, including public schools, public universities, and state parks.

The highlight is the Indiana Pacers NBA team color taken from gold and blue flags.

In late 2008, the CW-affiliated WTTV, licensed by Bloomington, used the torch and star element in its station logo until 2015, when it became a CBS affiliate, although the logo is still used for its second digital channel.

Some sort of Indiana flag was used as the Gotham flag in the 1989 Batman movie. The flag raised in the mayor’s office.

The logo of the purchased Amoco BP Company (formerly Indiana Oil Standard) prominently has a torch to commemorate the origin of the company’s consciousness.

It is still in several BP stations using Amoco and Standard trademarks to maintain trademark protection.

Indiana is approximately ninety-four thousand square kilometers and has a population of six million and eighty thousand people. The capital of this state is Indianapolis. Indiana has a relatively high GDP.

Like other Midwestern states, Indiana has a long history of archeology. Indigenous peoples lived in the Midwest more than 15,000 years ago and covered many major cultural changes.

In the 1000s, like neighboring Kentucky, Indiana was the culture of ancient Mississippi and Fort.

The most famous local nations were the Chikasaw, the Lenape, the Viandut, the Cherokee, and the Shawnee.

Indiana was first explored by the French, including Robert Cavelier, the Sever de la Salle who explored Kentucky.

In 1679-1680, this region was the most important factor in the Franco-British War for North America, which culminated in the British victory in 1763.

George Rogers Clark led American forces against Britain in the region during the Revolutionary War and before the government, Indiana until the victories of General Anthony Wayne at the Fallen Timbers in 1794 and General William Henry Harrison at Tippecanoe in 1811. He was a Native American.

During the nineteenth century, Indiana was home to several empirical communities, including the ones founded by George Rapp and Robert Owen in New Harmony.

During the Golden Age, Indiana became a vast industrial state. The 41-mile pier of Lake Michigan, Indiana, is even today “one of the world’s largest industrial centers” producing iron, steel and oil products.

This industry in Indiana played a major role in the growth of the American automobile industry. The region suffered as much recession as any other country, but the Indiana-based industry pushed the state to great heights after World War II.

Vice President Mike Pence – who grew up in Indiana – served as governor of Indiana for four years.

Wyandotte Cave, one of the largest caves in the United States, is located in the city of Crawford in southern Indiana, and West Baden and French Lick are famous for their mineral springs.

Other attractions in the area include the Indiana Hills National Park, the Indianapolis Expressway, the Lincoln National Memorial, and the George Rogers Clark National Historic Park.

In 2017, Indiana had a civilian workforce of nearly 3.4 million, the 15th most populous country in the United States. Indiana has an unemployment rate of 3.4 percent, which is below the national average.

The state’s total gross domestic product in 2016 was $ 347.2 billion. A high percentage of Indiana’s revenue comes from manufacturing.

According to the Bureau of Labor Statistics, approximately 17 percent of the state’s non-farm workforce is in manufacturing, the highest in the United States.

Indiana, despite its reliance on production, has been less affected by the decline in traditional rust belt production than many of its neighbors. These explanations seem to be specific factors in the labor market.

Second, Indiana’s workforce is primarily in medium and smaller cities rather than in very large and expensive metropolises.

This allows companies to pay a little less than they normally would for these skills. Businesses in Indiana often see the opportunity to acquire above-average skills at below-average wages

The location of Indiana is in the Midwestern United States. It is one of the eight states that make up the Great Lakes region.

Indiana borders on the north by Michigan, on the east by Ohio, and on the west by Illinois.

Lake Michigan borders Indiana to the northwest, and the Ohio River separates Indiana from Kentucky in the south.

One thought on “Flag of Indiana state of united state”

Mon Dec 14 , 2020
The Barbados flag was officially adopted on November 30, 1966, the first day of the island’s independence, when it was first raised by Lieutenant Hartley II of the Barbados Regiment. There are two explanations for the symbol of the Barbados flag. Both explain that the broken trilogy is a symbol […] 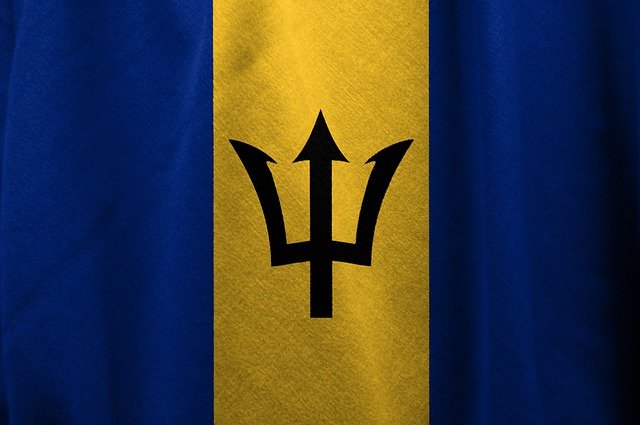