The Guyana flag has been the national flag of Guyana since the country became independent from the United Kingdom in May 1966, also this flag called the Golden Arrow.

After World War II, Guyana, like many other nations, won its first national flag.

The first national flag of Guyana followed several colonial flags that followed Guyana during its time as a British colony.

The flag was adopted on May 20, 1966. This flag was designed by Whitney Smith. He selected each element for the following reasons:

History of the Guyana flag

The first Guyana flag to be used as a colonial flag was approved by the British government in 1875.

It was a standard colonial flag of the time, with a blue background showing Union Jack in the canton and a colonial seal in flight. The colonial seal depicts a sailing ship and sea in honor of Guyana’s importance to the British naval and trade network.

The seal was located on a white disk in 1906 to create a design that was used until the white disk was removed in 1919.

The flag of Guyana has changed again in 1955. The white disk returned to the flag and the older seal was replaced by a different sailing ship with the slogan of the colony displayed below it on a shield.

It was the last colonial flag to display Guyana and was used when the country gained its independence in 1966.

Guyana as soon as became an independent state it adopted a new flag. The government decided to use a plan proposed by American scientist Whitney Smith, with a few modifications proposed by the British Arms College.

This plan has not changed since the approval of the first symbol of the nation.

The Guyana flag is known as the “Golden Arrow” in honor of its unique design. The flag has a green square with several triangles stretched along with the lift.

The first triangle is red and borders a black triangle. A taller yellow triangle extends beyond the two and is bordered by a white triangle.

Each color in the Guyanese flag has a symbolic value. Green land represents the country’s agriculture and its vast forests.

The Guyanese National Emblem was adopted in 1966. The design includes a shield with three blue wavy lines in the center, Victoria Regia lily at the top, and Canje Pheasant at the bottom.

The Co-operative Republic of Guyana

Guyana is a country in northeastern South America in the Caribbean. Its capital is Georgetown and its population in 2015 was about 767 thousand people.

The country’s official language is English and its currency is the Guyanese dollar. Guyana bordered with Brazil to the south, Suriname to the east, Venezuela to the west, and the Atlantic Ocean.

Guyana is the smallest country in South America, with 215,000 square kilometers after Uruguay and Suriname.

If you pay attention to the history of Guyana, you will come across 9 Indian tribes that lived indigenously in this region. These 9 tribes generally have certain classifications. The first group to enter Guyana was the Europeans, who chose the country as pirates.

In the 17th century, Guyana was occupied by the Dutch. This trend is very important in history.

As is clear from the history of Guyana in 1834, slavery was banned and runaway slaves returned to their cities.

The migration of workers from Europe and Asia to Portugal and Germany for more work has been increased, and sugarcane fields have been occupied many times in the spring. In 1917, about 240,000 Asians entered and lived in Guyana.

In this country, for example, history has been shaped by those who can professionally assess the situation.

The history of Guyana depends on different governments. In other words, in this country, everyone has the right to consider a part of cultural principles.

The culture of the Guyanese people

If you are careful about the culture of the people of Guyana, it must be humorous for you. The people of this country miss lunch with music, and this is as important as water in their lives.

Traditional music is a very important issue in this country. The people of Guyana have always tried not to enter the culture of life of others. Not entering into the culture of people’s lives is one of the best traits you can give as an example.

In general, the culture of living in this country is evaluated in two categories.

Children interested to read poetry from an early age. Poetry reading in this country has the right share.

It is clear that poetry reading paths in Guyana can be accurate and principled. Every person must have a special taste to write poetry in Guyana.

Another distinct culture among the people of Guyana is the culture of living as a group. Tribal life is very common in this country. Everyone tries to make their life depends on the scientific system and has achieved excellent results in this regard.

The people of Guyana are always trying to categorize the culture of life. Living in this country in general has shaped certain studies. The culture of life in Guyana depends on specific governments.

Guyana borders 1119 km with Brazil, 600 km with Suriname, and 743 km with Venezuela. The length of its coastline is 459 km. The highest peak of this country is Roraima with a height of 2835 meters.

The country has five natural areas:

The low-lying and fertile swamp plain along the Atlantic coast where most of the country’s population lives.

A strip of white sand with hilly hills and clay soils some distance from the shore and most of Guyana’s mineral deposits are in this area.

Dense rainforests in the mountainous region of the south of the country, semi-desert areas in the southwest.

And small areas of inland lowlands (inland savannahs) where there are mountains that gradually rise toward the Brazilian border.

Guyana has one of the largest untouched forest areas in South America, parts of which are still difficult for humans to access.

Guyana’s climate is tropical and mostly warm and humid, although strong winds blowing from the northeast help to moderate the country’s climate.

The country has two rainy seasons, one from mid-November to mid-January and the other May to mid-August.

2 thoughts on “Flag of the Co-operative Republic of Guyana”

Flag of the Kingdom of Saudi Arabia

Fri Sep 25 , 2020
The Saudi Arabia flag with white Arabic text and a sword under it is green. The sword is in a horizontal position and its tip is facing the elevator. The Arabic text لَا إِلٰهَ إِلَّا الله مُحَمَّدٌ رَسُولُ الله (lā ʾilāha ʾillā-llāh, muhammadun rasūlu-llāh) is the Islamic declaration of faith: […] 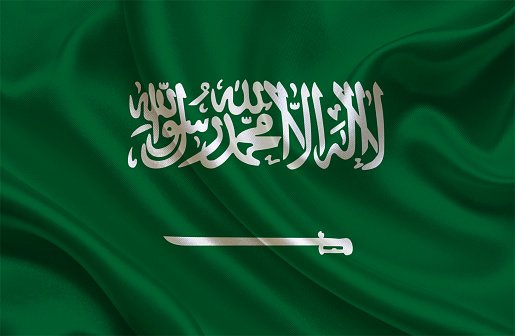