The Guinea flag was adopted in 1958 when the country gained independence from France.

Since the flag is exactly the same as the Rwandan flag, Rwanda had to add the capital letters R to the middle of the yellow bar.

The flag consists of three vertical colors that honor the French flag. The stripes are red, yellow, and green.

These colors have a traditional pan-African character that symbolizes solidarity between the independent African countries.

red should commemorate the bloodshed in the struggle for the homeland, yellow is a symbol of the country’s mineral wealth, and the sun and green stripes represent the lush vegetation of Africa.

For centuries, many empires ruled the region known as Guinea. The first known flag in the region was the flag of the Vasolo Empire, which came to power in 1878.

The flag was in three horizontal colors: blue, light blue, and white, with a red triangle on the left and 7 feathers. A white star with a red diamond inside.

When the French colonial army overthrew the Vasolo Empire in 1898, the area became a French colony.

Then three vertical colors of French blue-white-red were the national flag.

Guinea gained independence from France in 1958 after a decisive vote against autonomy.

The newly independent country decided to establish financial ties to form the Union of African Countries.

The flag had three horizontal colors red-yellow-green and two black stars in the center. When Mill joined the union in 1960, a third black star was added. The union was dissolved in 1963.

The first national flag of Guinea adopted in 1958. This flag has the same pan-African red-yellow-green

The colors of the movement as the Union of African Countries but in three vertical colors to reflect its past as a French colony.

Each color has a special meaning for the people of Guinea, red represents the blood of the people.

Yellow sun and green vegetation of the country. The flag has not changed until now.

The only rule for the flag is that it must have strips of the same width.

The tricolor flag of Guinea has a lot of meaning behind its colors.

These colors represent the bloodshed of the martyrs who fought for the freedom of the nation, the natural wealth of the country and the beauty of the sun above, and the lush vegetation of the country.

The colors and designs of the flag are very similar to those of other African nations in the region.

The colors of the Guinean flag are traditional Pan-African colors that many other African countries used. The tricolor flag, from left to right, is red, yellow, and green.

Red indicates the bloodshed of martyrs throughout history. Yellow symbolizes the country’s natural wealth and the sun above, and the green represents the country’s lush landscape.

The current Guinean emblem was updated in 2011. It is equipped with a white shield with the flag of Guinea at the bottom.

Above the flag is a dove holding an olive branch and hanging from a shield.

At the bottom, there is a banner with the words “WORK, JUSTICE, SOLIDARITY”.

The Republic of Guinea

Guinea, officially the Republic of Guinea, is a country in northwestern Africa on the Atlantic coast.

Its capital is Conakry. The country has a population of 13,133,000 and its official language is French.

Its common vernacular languages are Fulani, Malinke and Soso.

On October 2, 1958, guinea became independent from France. Guinean franc is the currency of Guinea.

Eighty-five percent of the country’s population is Muslim. 10% of the people in this country are also Christians.

It bordered with Guinea-Bissau, Senegal, and Mali to the north, the Atlantic Ocean to the west of Sierra Leone and Liberia to the south, and Cote d’Ivoire and Mali to the east.

The Niger River, the Gambia River, and the Senegal River all originate in the highlands of Guinea.

The country now known as Guinea used to belong to one of the African kingdoms.

Centuries ago, Guinea and the financial regions of Senegal formed a vast empire that disappeared. In the 15th century AD.

The Portuguese entered the land and ruled it. In the 17th century, the Fulani Islamic State was established in the Futajalon region.

Guinea became a French colony in 1849 and renamed French Guinea and became part of West Africa.

It became independent on October 2, 1958, and was the first French colony to become peacefully independent.

Also, this country has been ruled by authoritarian rulers since independence until the 2010 elections, making it one of the poorest countries in the world.

Guinea gained its independence in 1958 under the leadership of Ahmed Scotore. Ahmed Scotore was President of Guinea from January 15, 1959.

He established close relations with the socialist countries and formed a Marxist government with a single party. Relations between Paris and Conakry were completely severed between 1965 and 1975.

In the late 1970s, Ahmed Scotore moderated his Marxist policies and moved closer to Islamic countries.

Ahmed Scotore was president five times in a row after coming to power in 1959 and ruled the country for twenty-five years from 1958 to 1984.

After his death in 1984, Lansana Conte seized power in a military coup and ruled for twenty-four years.

Conte faced numerous internal problems during his reign and relied on military force to maintain his power.

In one of the latest examples of this form of government, the 2007 Guinean protests against the harsh economic conditions were severely suppressed by government forces, killing at least 186 protesters.

Religion: 85% of the population is Muslim and the rest are mostly Christian. The country has a crescent shape and the source of the Niger River is in the southeastern highlands.

The people of Guinea belong to 24 different ethnic groups, and the largest and most important ethnic groups in the country are the Fula 40%, the Mandingo 30%, and the Sosu 20%, respectively.

The official language of Guinea is French, but more than 24 local languages, there are in the country.

Fifteen newspapers and periodicals are published in this country. The literacy rate is 35.9 percent, according to official UNESCO statistics.

In addition to a group of indigenous Shiites in the country, groups of Wahhabis, Baha’is, and Ahmadiyya Qadianis are engaged in propaganda and educational activities in the country.

Guinea, with an area of 245,857 square kilometers, located in West Africa, bordered on the north by Guinea-Bissau, Senegal, and Mali, on the east by Mali and Ivory Coast, and on the south with Liberia and Sierra Leone. The western border of the country is approximately 300 km long and forms the Atlantic Ocean. In general, the temperature in Guinea is different in dry and rainy seasons.

It makes up about 18% of the territory of Guinea and the cities of Conakry, Kindia, Koya, Bokeh, Dobrica, Buffa, Four Caria, Feria, Tele Meleh are located in this area.

This part covers 20% of the territory of Guinea and the Fulas are located in this area. The important cities of this part are Mamu, Dalaba, Labeh, Tuge, Kubia, Pita, Leloma, Mali, Kundara, and Gaval.

Upper Guinea is crossed by the famous Niger River. They make up about 40% of Guinea’s territory, and the Malinke people are concentrated in this area.

Located in southwestern Guinea and inhabited by a mix of different tribes. The cities of Armor Furnace, Bella, Lula, Masanta, CC Dogo, Geh Do, and Yomo are within this range.

The country covers an area of 245,857 square kilometers and has a population of about 13 million.

Its capital is Conakry and its official language is French, as well as Soso and Malinese and other local languages.

5 thoughts on “Flag of the Republic of Guinea”

Flag of the Kingdom of Lesotho

Wed Sep 30 , 2020
The current national Lesotho flag, which was adopted on the 40th anniversary of Lesotho’s independence on October 4, 2006, has three colors: blue, white, and horizontal green, with a black and Mokorotlo(Basotho hat) in the center. The design is designed to reflect a country that is at peace both inside […] 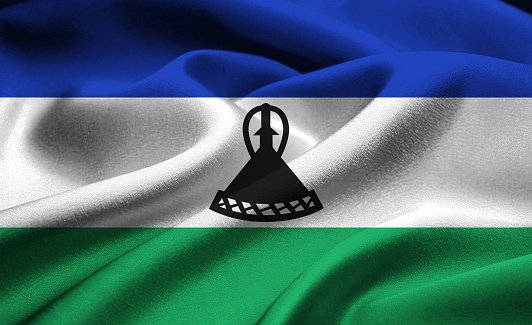