In 1957, when Ghana became a sovereign nation, Nkrumah as the president adopted the first Ghana flag on independence day: 6 March 1957.

In 1959, When Ghana along with Guinea created The Union of the African States, one more star, and when Mali joined the union another star was added to the flag to make The Flag of the Union of African States. It was the union’s flag until 1963; When The union disbanded.

in (1962-1966), The new flag was a tricolor with a single star and white middle strip instead of gold. Then in 1966, the first Ghana flag was readopted to be the national Ghana flag to the present day.

The Ghana flag also known as The State Ensign of Ghana is a horizontal tricolor that contains red, gold, and green and a five-pointed black star in the gold strip. The top point and two bottom points of the star touch the edges of two other strips.

Symbolize and colors of Ghana flag

Ghana as the first African nation to become independent of colonialism used pan African colors for its flag.

Pan African flag or The Flag of the Black Nations is a tricolor with red, black, and green. Pan African flag has its colors from the Ethiopia flag as a nation that never submitted to colonialism. In the pan African flag middle strip is black to represent the black nation.

The black star in the middle of the gold strip of the Ghana flag is the symbol of African unity against colonialism and African emancipation.

The Black Star Line was between many businesses built on the idea that black nations should be financially free from white colonizers.

The company became influential for the “Back to Africa” movement that believed all people with African roots have the same race as well as the same destiny and they should come back to Africa. The black star symbolizes African freedom and emancipation.

The national flag with a golden ribbon around it is the presidential flag since it was first adopted in 1966.

A Ghana national flag in the canton of a white background divided into four by a red cross forms the Ghana naval ensign.

The Ghana civil ensign is a red background with the Ghana national flag in the canton.

The Coat of arms of Ghana

The coat of arms of Ghana contains a light blue shield divided into four parts by a green St. Gorge cross with a golden edge and a golden lion in the center. Every one part has its symbol. The top left part has a sword and a staff crossing and on top right there is the Osu Castle on the coast of the Gulf of Guinea illustrating the former presidential castle. These two symbols represent the authority of local and national government.

In the bottom left a cocoa tree and in the bottom right a gold mine represent natural resources and industrial wealth of the country.

The golden lion in the center of St. Gorge cross is a symbol to represent Ghana as a member of the Commonwealth of Nations.

At the top of the shield stands the black loadstar of African emancipation.

Two golden Tawny eagles – the national bird of Ghana-  hold and protect the shield with one foot and are standing on a banner stating the motto of Ghana; Justice and Freedom.

About the republic of Ghana

The republic of Ghana by the local name of Ghana is located on the south coast of West Africa only a few degrees north of the Equator (zero lines of latitude) and on the Greenwich Meridian (zero line of longitude).

This makes Ghana the closest landmark to the center of the world. Ghana is bordered on the north by Burkina Faso and on the west by La Cote D’Ivoire, on the east by Togo and it shares boundaries with the Gulf of Guinea and the Atlantic Ocean to the south with 539 km coastline.

Being located between the Equator and the Tropic of Cancer Ghana has a tropical climate, it has two wet and dry seasons. There are two rainy seasons, separated by a short cool dry season.

The capital of Ghana is Accra, The second-biggest city in the country. Tema, which is adjusted to Accra -the industrial city- is on the Greenwich Meridian.

English is the official language of Ghana and there are 50 tribal languages.

Agriculture is the main occupation of about 40 percent of the working population of Ghana.

Ghana is one of the biggest producers and exporters of cocoa in the world. There are significant gold mines in Ghana and it is the world’s second-largest gold producer as well as diamond.

Archaeologists have found some traces of inhabitants in the area in the bronze age. Archaeological discoveries also indicate that Central Ghana has been inhabited since 3000-4000 years ago. in about 10th century A.D. some modern Ghanaian ancestors migrated to the area.

Ghana is an ancient nation. It has its name after the medieval ruler of West Africa which is 500 miles north of present Ghana; King “Wagadugu”.

Ghana was the title of the empires who ruled the kingdom of west Africa. Some modern Ghanaian’s ancestors are linked to people of the old Ghana.

In the 15th century, The Portuguese came to Ghana and found it to be a land of gold mines. They named the kingdom “Mina”.

They colonized Ghana to business in gold, ivory, and slaves.

In the 18th century, other Europeans started to colonize Ghana which included the English, Danes, and Swedes. In 1874, the British- the only colonizer left in Ghana- named the country The Gold Coast Crown Colony.

In 1951, Britain announced a new constitution for the Gold Coast. The Gold Coast became autonomous in its affairs, and an election was held in which Kwame Nkrumah -the leader of Ghana nation to freedom -became prime minister.

In 1957 after years of social movements, The Gold Coast achieved independence from Britain and under the name of Ghana became the first black nation of sub –Saharan to be independent of colonialism.

On 1 July 1961 after the first presidential election of Ghana -Kwame Nkrumah – who was the elected president, announced Ghana the republic of Ghana. 1 July is now the republic day and 6 March is the independence day.

5 thoughts on “Republic of Ghana Flag”

Sat Jul 18 , 2020
The South Korea flag was first recognized on March 6, 1883, by the Joseon Dynasty. It is known as the national flag, civilian emblem, and provincial emblem, and also has a 2: 3 aspect ratio. White is a traditional color in South Korean culture. It is used in the background […] 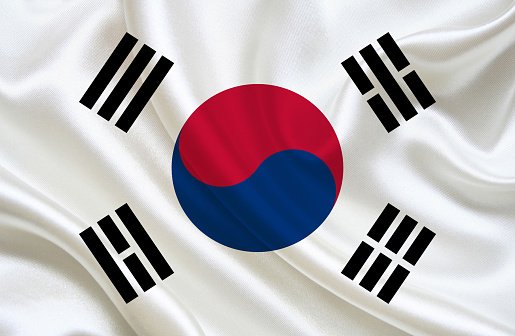