The current 2: 3 Rwanda flag was designed by Rwandan artist and engineer Alfonso Kirimobencio and adopted on October 25, 2001.

The flag has three non-equal horizontal stripes of sky blue, yellow, and green, with a blue strip twice the size of the other two strips at the top, yellow in the middle, and a green stripe at the bottom.

There is also a 24-color golden sun near the end of the flag flight section in the upper corner of the blue bar.

In the flag of Rwanda:

The color blue is a symbol of peace and happiness, and the people of Rwanda must fight for the peace that brings them happiness and economic development.

Yellow is a sign of wealth in mineral resources and economic development.

The color green represents natural resources and the hope for the success achieved through the rational use of Rwandan people and the country’s resources.

The sun and its golden rays are a symbol of unity, enlightenment, and the struggle against ignorance.

One of the first flags flown in Rwanda was the flag of the East African company Germany. It was later replaced by the flag used by East Africa, Germany, Europe’s first colonial power.

When Rwanda became Ruanda-Urundi, the Belgian flag was used. It was not until 1959 that a flag was used for the Kingdom of Rwanda.

This flag was for only two years until another flag adopted. It was a tricolor that used pan-African red, yellow, and green, with a black letter “R” distinguishing it from the flag of Guinea.

The flag was used until 2001 but was changed due to the 1994 genocide. The new flag was adopted on October 25, 2001, and has remained unchanged since then.

The flag of Rwanda is in three colors. It has three horizontal bands of blue, yellow, and green from the top to the bottom of the flag, respectively. The yellow and green stripes are the same size.

The blue band is twice the size of the other bands. The top corner of the blue bar is charged towards the fly by a yellow sun.

The colors of the Rwandan flag are very important to the nation. These colors represent happiness, peace, economic development, and the hope of prosperity.

In addition to the three horizontal color stripes, a sun logo is located in the upper right corner of the flag.

This sun was added to the design to show enlightenment. In general, this flag shows the unity of the nation, heroism and self-confidence, and hope for the future.

The Rwandan flag uses four colors. The first is light blue, which is a symbol of peace and happiness. This is the largest horizontal band on the flag and is twice as wide as the other two bands.

The next group is yellow and symbolizes the development of the country’s economy.

The third and last group is green and is a symbol of hope for prosperity. Also, yellow create the sun sign in the corner, which is a symbol of enlightenment.

The Republic of Rwanda

Rwanda, officially the Republic of Rwanda, is a landlocked country in the east and center of the African continent.

It has borders with Kenya to the east, Uganda to the north, Burundi to the south, and the Democratic Republic of the Congo to the west. Rwanda has an area of 26,798 and a population of 12,952,218.

Its capital is Kigali “745,000” and its official languages are English, French, Rwandan, and Coastal. Rwanda is a lush country with a tropical climate in the Great Lakes region of Africa.

About 700 years ago, a pro-Kushi ethnic group migrated from southern Ethiopia and Somalia to southern Sudan and eventually settled in what is now Rwanda, Burundi, and parts of Uganda.

West African immigrants were engaged in agriculture. With the arrival of colonization in the region, ethnic tensions between the two tribes increased and led to two massacres, the last of which was in 1994, when pro-Ugandan insurgents shot down President Hutu’s plane.

In the face of the silence of the international community and the West, this crime took place and thousands of people were killed.

From 1894 the Berlin Conference gave the region to Germany under the name of Tanganyika. Germany’s defeat in World War I led to the partition of East Africa.

April 1994 marked the beginning of a genocide in Rwanda following the downing of President Hoto’s plane.

The incident also had a profound effect on developments in Burundi and the Congo.

The population of this country is 12.9 million people with an average age of 18.7 years. 1.5% of the population is infected with AIDS. 84% of the people are Hutu and 15% are Tutsi.

Religion 56% of the population of this country is Christian Catholic. And 5% of the people is Muslim.

The official languages include Kinyarwanda, French, and English.

The Hutu and Tutsi are the main ethnic groups in Rwanda. Ethnic tensions in Rwanda are not new.

In Rwanda, there has always been disagreement between the Hutu majority and the Tutsi minority, but the animosity between them has grown dramatically since the country came under colonial rule.

The Germans in Rwanda pursued a policy of giving the Tutsi minority, who are of pro-Tutsi descent, richer than the Hutu majority, and lighter-skinned people, better opportunities to live and more power.

In fact, there are many similarities between the Hutu and the Tutsi. They speak the same language and have a common place of residence and traditions.

According to one hypothesis, the Hutu and Tutsi divisions have no racial roots and were created in the mid-colonial years based on the financial wealth of the region’s inhabitants.

In this division, those who owned more than five head of cattle or equivalent or had strong feudal roots and better relations with the Belgian colonizers called Tutsi and others Hutu.

But when the Belgian colonizers entered the country in 1916, they considered the Hutus and Tutsis to be two separate entities and even categorized their identities by ethnicity.

The Belgian colonizers considered the Tutsis to be a superior ethnic group to the Hutus, and the Tutsis, pleased with their superior status, enjoyed a better level of education and employment than their Hutu neighbors for twenty years after that date.

After Belgium left the colony in 1962 and regained its independence to Rwanda, the Hutus took their place.

The image of the Tutsis painted in the following years has always shown that these people have played the role of a shield in all the crises in Rwanda.

Rwanda is one of the small Central African countries with an area of 26,338 square kilometers (10,169 square miles).

Rwanda has many hills covered with pastures and fields. In the northwest of the country, there are volcanic areas from which the mountain range continues to the southeast.

In the mentioned region, there is Karisimbi mountain, which is the highest peak of the country with 4507 meters.

The dividing line between the two catchments of the Nile River and the Congo River passes through an area in the west of the country at an altitude of 2743 meters.

From the western slopes of the mountain range, the fields go downhill and this downhill continues to Lake Kyu and the valley of the river one day.
This region is part of the Great Valley of Africa.

The hills to the east of the mountain range are smoother and the view of the hills of this region joins the plains, swamps, and lakes of the eastern border of the country with a gentle slope.

It is because of these landscapes that Rwanda has become known as the “Land of the Thousand Hills.”

The main source of the Nile River is in the Nyongwe Forest of Rwanda, and its water flows into Lake Victoria in Tanzania via the Mogo, Niabarongo, and Kagra rivers.

69 thoughts on “Flag of the Republic of Rwanda”

Flag of the Republic of Mozambique

Wed Sep 30 , 2020
The Mozambique flag is the flag of the country of Mozambique, which was first recognized on May 1, 1983. It is also the national flag and the national emblem and also has a 2: 3 aspect ratio. The left side of the flag shows a Kalashnikov rifle with a bayonet. […] 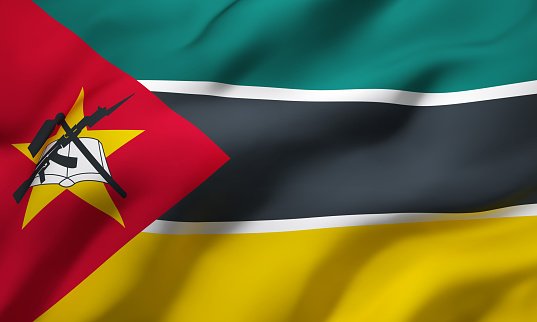