The Chad flag consists of three vertical colors of blue, yellow, and red stripes. This flag is almost the same as the Romanian flag, but its blue stripe has a darker shade.
This flag inspired by the French triangle because Chad was a French colony for many years.

At the same time, it brings with it two pan-African colors, and thus refers to relations with both France and other African countries.
The blue ribbon to the left of the flag represents the African sky and waterways, the yellow ribbon symbolizing the sun, and the arid desert in northern Chad and red traditionally stands for courage and bloodshed during the struggle for independence.

The flag was adopted in 1959 when Chad was liberated from the French regime.

The origin of the Chad flag goes back to the country’s independence movement. The flag was designed while Chad was a French colony.

It combined the French flag, which represented the country at the time, with the colors of the Pan-African movement to create a unique flag that blended the nation’s heritage with its hopes for the future.

It was officially when Chad became an autonomous republic in the French Empire in 1959 and was the national flag of Chad when it gained full independence from France in 1960.
Chad has experienced many political upheavals since then, but none of the country’s leaders has seen fit to change the flag design.

This flag is the most enduring symbol of the country, and every leadership has maintained this plan to show respect for the history of their country.

Chad flags are vertical triangular flags consisting of three equal stripes of blue, yellow, and red.
The design of this flag is taken from the French flag, which serves as an obvious link to the country’s past as a French colony. The color of the Chadian flag was chosen in a combination of symbolism and practical reasons.

Blue represents hope, water, and sky that stretches over the nation. Red represents the sacrifices made by the citizens of the country, as well as the continuous progress of the country towards a brighter future.

Yellow represents the sun and the desert that covers part of the country.
The colors were eventually taken from the Ethiopian flag, which in pre-Chad years had become a symbol of African pride and unity. Chad flags replace the green part with a blue part in flags that use that color to distinguish themselves from the flags of Mall.

Choosing green to replace with blue created a flag that was almost identical to the Romanian flag, but the flag’s designers believed that it would be better for their flag to be more like the flag of a distant country than a neighbor.

Similarities with the Romanian flag

The Chadian flag is almost identical to the Romanian national flag, although the colors on the Chadian flags may be more than what is specified for Romania.
Romania has used the flag since 1866 when it first appeared in its current form in Wallachia. It was officially from 1848 to 1948 when it was overthrown under the banner of the Romanian Socialist Republic.

Chad began using its current flag after independence from France in 1960.
When Chad adopted its flag, the Romanian flag was different: it used signs in the middle of the flag above the three colors.

This was added after World War II during the communist era in the second half of the twentieth century.

But in 1989, the Romanian Communist government was overthrown and the signs removed and the Romanian flag returned to the pre-war version, which was in line with the example adopted by Chad at the time.

The Republic of Chad

The system of government of this country is based on the system of the republic. Chad has borders with Sudan to the east, Libya to the north, Central Africa and Cameroon to the south, and Niger and Nigeria to the west.

The history of Chad dates back to the late nineteenth century. The area around Chad became French during this period, a process that led to the formation of the north of the country as a whole by the French. This issue did not end until the end of 1916.

Chad’s independence dates back to 1960. During this period, a bitter civil war broke out between the Muslim Arabs of North and Christian Africa.

Libya and France have repeatedly intervened by forcing Kurds to do so.
In October 1988, the civil war ended altogether, and this changed the historical situation in Chad. In March of this year, a series of counter-offensive riots took place, attacking military bases in Sudan and making it a little difficult to control the entire country.

The history of Chad has not changed in recent years, but it is clear that the principles of historians have improved for the country.

Chad is a very beautiful and wonderful country that has been able to access unique and natural attractions in a good way. Recognition of historical practices in this country depends on professional principles.

Censuses show that a professional team in the country has been able to improve access to science. Chad is one of the poorest countries in the world with a rich history.

The people of Chad have endured many hardships in their lives and hard work is part of the culture of this country, there is no such thing as bodybuilding in Chad and everyone has tried their best to follow the simplest cultural paths in Chad.

It is clear that people in this country attach great importance to sleep and fall asleep earlier at night and are refreshed early in the morning.

The culture of living in Chad is such that you do not have to talk on your mobile phone during the rental work, it is clear that the principles of tourism in this country have been carefully assessed.

In recent years, the culture of life has been pursued professionally. The people of this country try to have precise principles.
Children work from an early age and try to get through the process and get results. It is clear that the quality of cultural conditions in this country has improved. It is clear that it has routine functions.

Chad is a landlocked country, and wherever you look, it is landlocked, right in the center of Africa. Its capital is a city called Najmana, which does not have many facilities for living.

Chad covers an area of about 1,284,000 square kilometers. It is ranked 20th in the world in terms of area categories.

It is on the list of 30 largest countries in the world and is one of the largest African countries.
Much of the country is desert, and Chadian lands are often uncultivated. Overall, about 27% of Chadians are Sarahs and 12% are Arabs.

The people of Chad speak French and Arabic, and the language of Chad has a clear accent.
A certain population has been seen in this country. The system of government in this country depends on the republican system, and of course, Chad is bordered by Libya on the Shawl side and Sudan on the east. It is bordered to the south by Central Africa and Cameroon. The Chadian franc is priced at the latest dollar.

So that the time zone of this country is two parts, world time and summertime.

Chad is a plain and desert country and its most important heights are located on the border with Libya. In general, the country has vast lands and a special climate.

4 thoughts on “Flag of the republice of Chad”

Flag of the Republic of Yemen

Sat Sep 12 , 2020
The current Yemen flag was adopted in 1990 after the unification of North and South Yemen and has tricolor red, white, and black. Before 1990, each episode had its own flag. The North Arab Republic used a flag similar to the current one but with a green five-pointed star in […] 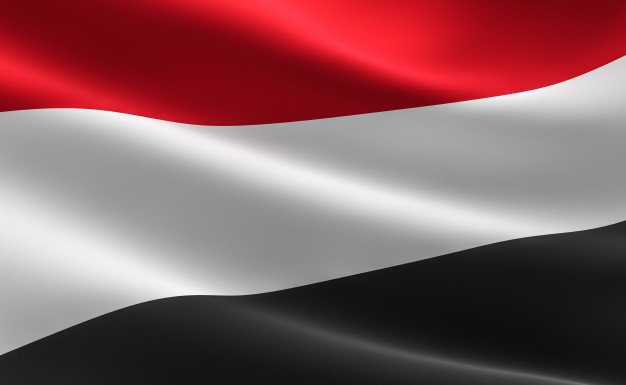