The Hungary flag is a charged horizontal tricolor with in the middle an emblem. The used colors in the flag are red, white, green.

The tricolor flag of Hungary was officially adopted on October 12, 1957, after the abortive

revolution in 1956. The colors are the same as those found in the traditional coat of arms of Hungary.

The white said to symbolize Hungary’s rivers, the green its mountains, and the red the bloodshed in its many battles.

The three colors mentioned in a 1608 coronation ceremony, but their association with the monarchs of Hungary may go back to the 13th century.

The coat of arms also displays a double-cross and St. Stephen’s Crown, with its unique bent cross at the top.

St. Stephen was Hungary’s first Christian king and generally considered the founder of the Hungarian state.

form (possibly influenced by the French Tricolor). These became part of the Austrian merchant flag in 1869 after the two countries formed the dual monarchy of Austria-Hungary.

In 1918, with the dissolution of Austria-Hungary, the tricolor became the national flag of an independent Hungary. The traditional coat of arms displayed on some flags.

A new coat of arms was created that also incorporated the national colors, but it was not added to the flag.

Hungary’s flag, which was made official on May 23, 1957, consists of three horizontal colors namely red, white, and green from the top to the bottom respectively.

The three colors have been present historically ever since 1608 during the coronation ceremony of Mathias II of Hungary and later coronations of other leaders.

The three colors had also been present further back in the 13th century when the monarchs used them. Due to their importance in the history of Hungary, the three colors are also used in the nation’s coat of arms, which has an illustration of the crown of St. Stephen and a double-cross. St. Stephen was the first Christian king of Hungary and is regarded as the nation’s founder.

The origins of the red-white-green flag

The first of our national symbols was the coat of arms, the colors of which became national colors, and later appeared in the Hungarian flag.

According to some sources and illustrations, the first flags containing the Hungarian coat of arms with the red-white-green colors appeared in a battle early in the 15-years-war. This day was August 3, 1601.

When Zsigmond Báthori and General Giorgio Basta led their men into battle against each other at Goroszló.

When Matthias of Habsburg was crowned Matthias II, King of Hungary at Pozsony.

The red-white-green trio became a strong national symbol during the 1848-49 revolution. In these times, the colors were representative of the nation, appearing in the flags carried by the Hungarian soldiers.

However, a ‘wolf-teeth’ pattern bordered white flag, Its color includes red, white, and green. The XXI. law from 1848, made the color trio the official national colors of the Hungarian people.

The law-makers mistakenly believed that the three green hills represented in the flag are as old parts of the coat of arms as the double cross or the Árpád stripes.

Despite this, the green hills were included in the coat of arms much later and weren’t even green in the beginning. Deriving from this, all three colors became national colors only in 1848.

After the Hungarian Revolution of 1848 that defeated, the three colors prohibited as symbols by the Austrian Emperor.

However, after the Compromise of 1867, the tricolor became not only a national symbol but also the official Hungarian flag.

Symbolism in the Hungarian Flag

The symbolism behind the colors is varied since people have interpreted the symbolism in a variety of different ways.

For example, the red color represents strength for some people while others associate it with the blood that spilled for the country. White equates to faithfulness for some while others attribute it to freedom.

The green means hope for some people while others associate it with the green and lush vegetation of Hungary.

However, according to the Constitution of Hungary, which has been in use since January 1, 2012, the red stands for strength, the white stands for fidelity, and the green symbolizes hope.

This constitution is not explicit in the ratio of the width to the length. The only law that mentions the ratio is a law from 1957, which states that merchant vessels at sea should fly the tricolor with a width to length ratio of 2:3.

More recently, there is a government decree from 2000, which did not include in any official document, which states the width to length ratio for flags flying around government buildings should be 1:2.

4 thoughts on “Flag of Hungary”

Flag of the United States

Sun Jun 7 , 2020
The USA flag is the official flag of the US federal. The flag has been modified 26 times since its design from 1775 to this day. The flag of the us was originally almost like the flag of British Malay Archipelago Company. Today, the flag has 13 white and red […] 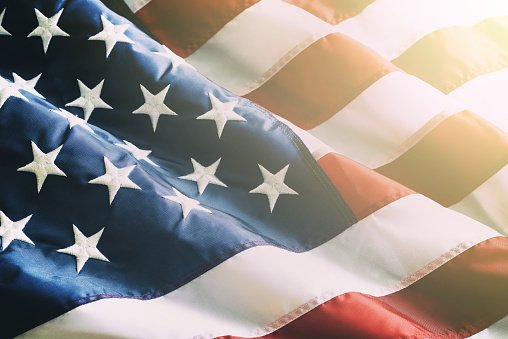