The design of the current Finnish flag is inspired by the flags of Denmark and Sweden. It is white with a blue cross that extends to the edge. The cross is a common symbol found in Scandinavian flags.

This shows the connection of Finland’s heritage with other Scandinavian countries. The blue color represents many lakes found throughout Finland. White represents snow that covers the entire country during the winter.

The first known “Finnish flag” was presented with the national anthem Maamme in 1848. The highlight was the Finnish national emblem, surrounded by laurel leaves and placed on a white flag.

The current blue crossover scheme was first established in Finland by the Nyländska Jaktklubben, a sailing club in 1861 in Helsinki. In addition to the blue cross on a white background, the yacht club flag had Osimaya crowned arms at two times, with cross branches in the upper quarter of the upper lift.

Except for the position of the cross, the flag was similar to the flag of the St. Petersburg Yacht Club, which was established last year. The design can be traced to the Russian navy badge, which has a blue cross spell on a white background.

During the Crimean War, Finnish merchant ships captured by the British and French fleets carried a flag called the Flag of St. George, based on the Russian customs flag, was waved.

In this type, the cross was thinner than the modern flag, and the proportions were equal. Another Blue Cross flag was made official in 1861 for private ships.

In 1910, in connection with the Russianization of Finland, the Russian authorities decided to add the Russian flag to the canton. However, this met with resistance.

The flag ridiculed as the “slave flag” and most Finns refused to wave it. Instead, a triangular flag flew without these modifications, thus circumventing the flag command.

Shortly after Finnish independence in 1917, a competition held to design the Finnish flag. Several different designs submitted. In the case of colors, the entries mainly divided two categories.

One entrance had a Dannebrog cross design, but had a yellow cross on a red background. The other entrance had diagonal blue and white stripes, but criticized as more suitable for a barber shop than a newly independent country.

Akseli Gallen-Kallela presented a similar cross flag, but inverted colors (white cross on blue), but this considered very similar to the Swedish flag and especially the Greek flag at the time.

Finally, artists Eero Snellman and Bruno Tuukkanen determined the final form of the flag. According to tradition, the flag was based on a design by the poet Zachris Toplius around 1860.

The state flag modified in 1922 when the crown removed, and again in 1978 by changing the arm symbol to a rectangular shape.

The national flag of Finland is known as the siniristilippu – or blue cross flag. This name is due to the blue Nordic cross that forms the design of the flag.

The meaning behind the cross of Northern Europe is simple – it represents Christianity. All Scandinavian countries except Greenland have included the Nordic Cross in their designs.

The color combination used in the Finnish flag historically used on various flags to show the country’s natural features, which we will discuss in more detail in the next section.

The Finnish flag uses two colors, blue and white. The blue Nordic cross forms the design of the flag. This color shows the sky of Finland and many lakes of the country. A white background indicates snow.

Finland also has a state flag with a similar design. The only difference is that the flag contains the national emblem. The badge includes the colors yellow and red.

The Republic of Finland

The currency of this country is the euro.

Both Finnish and Swedish are official languages. 89.33% of the population is Finnish-speaking, and Swedish is spoken in several coastal areas in the west, south, and the Netherlands.

The ancestors of the present-day Finns, the Finns, began migrating from the south coast of the Gulf of Finland to Finland in the late first and early second centuries AD.

Until then, Finland was almost uninhabited and only the Lap people were scattered. After the Finns arrived, the laps moved north.

In the twelfth century, the Finns sought help from Sweden to defend themselves against their enemies, especially the Russians, and thus Finland invaded Sweden.

Finland suffered heavy casualties during the ongoing wars between Russia and Sweden. Sweden ceded Finland to Alexander I (Russia) in 1809.

In the early nineteenth century, the independence movement gained strength under the leadership of people like Rosenberg. In 1863 the Finnish language was recognized.

From the late nineteenth century, the Finnishization movement in Finland was started by Tsar Nicholas II but led to fierce Finnish resistance and general strikes. In 1901, the Finnish people had a legislature and the right to vote.

After World War II, especially at the beginning of the second half of the twentieth century, Finland regained its natural state and, despite its bitter past relations with the Soviet Union, still has friendly relations with this country. Finland has good economic and social growth and has become a developed country in recent years.

Finland is one of the industrialized countries whose economy is based on the market economy. In Finland, mixed economic systems are used, which have been largely brought to power by the government.

There is no such thing as poverty in Finland, in general, the Finnish government has tried to eradicate poverty and thus.

There are still people in this country who are in a weak position in terms of income; But that they are in “poverty” is not seen at all.

In Finland, items are expensive, and this has led to both men and women working. The average life expectancy in Finland is 81 years.

The tax system in Finland is so strict that 30% of the government budget is financed through direct taxes. Taxes in Finland are spent on public and welfare expenses. The country has advanced technology so that one of the strongest economic sectors in Finland is the lack of communication problems.

Finland’s GDP has grown well in the new year. In this country, about 2.8% of GDP is in the agricultural sector and 25.9% of its economy is in the industrial sector, but services with 71.2% is the largest economic sector in Finland (according to statistics 2012).

Most of Finland’s trade relations are with Germany, Sweden, Russia, the United States, and the Netherlands. Imports to Finland include food, chemicals, textiles, and textile fibers.

Greetings in Finland associated with handshakes and eye contact and handshakes are often short, firm, with no extra movements. Greeting children is accompanied by hugging them; Robusti is less common in Finland.

In this country, lunch and dinner often have to be served hot. Keep in mind that the people of this country like to drink coffee; Rewarding is also part of the culture of this country. The hijab of Finland is free.

Privacy and tranquility are very important in this country; So people in Finland do not use shoes at home at all. Giving is another important culture in Finland.

In this country, most people give each other flowers or chocolates. In Finland, there is a very intimate atmosphere between the people, which shows the high quality of life of the people of this country.

Finland is located between 22 and 32 degrees east longitude and 60 to 70 degrees north latitude. Finland borders Norway to the north, Russia to the east, and Sweden to the west.

The Gulf of Botany is to the west, the Gulf of Finland to the south, and the Baltic Sea to the southwest. Helsinki is located in the southernmost part of the country but is closer to the north than any other capital in the world.

Finland is a lowland country, consisting of several lakes (known as the Thousand Lakes, which cover 10% of the country’s total area) and 86% of the country covered by tundra and taiga forests.

Its mountain ranges are often located in the northern half. Finland’s largest lake is the Great Saimaa, which covers an area of ​​4,377 square kilometers. Finland’s longest river is a small Yuki with a length of 483 km.

One thought on “Flag of the Republic of Finland”

Sun Jan 24 , 2021
The Curaçao flag represents the country of Curaçao as well as the island region of the Netherlands Antilles from 1984 until its dissolution in 2010. The flag was hoisted for Curaçao and its affiliates, for whom the Dutch flag had never been used. The flag has a blue background and […] 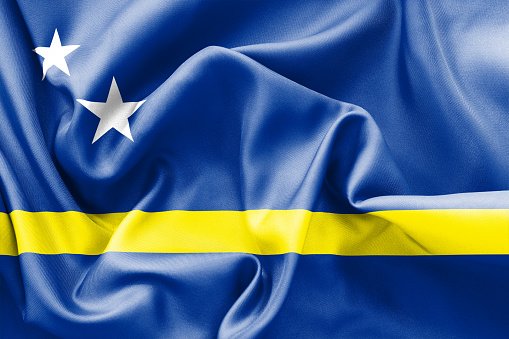