The Cango flag ( the national flag of the Republic of the Congo) consists of a yellow diagonal band divided diagonally from the lower corner of the elevator, with a green top triangle and a red triangle.

This flag was adopted in 1959 instead of the three French colors until 1970 when the People’s Republic of Congo was established.

The new regime changed the flag to the red square with the national emblem of the People’s Republic in Canton. This version was used until the fall of the regime in 1991. The new government immediately restored the original flag before 1970.

Under French colonial rule in Congo France, the authorities of this colony forbade the use of their distinctive colonial flag. This was because they were concerned that this could increase nationalist sentiment and lead to a call for independence.

However, with the rise of the colonial movement in Africa, the French were obliged to grant limited autonomy to the Congo as an autonomous republic in French society.

This began on November 28, 1958, after a referendum and nine months later, the legislature on the national flag.

The new flag was formally adopted on September 15, 1959, and remained unchanged less than a year later on August 15, 1960, when Congo became an independent country.

In 1968, a coup took place in the country, the new government declared the Republic of the Congo a year later.

In doing so, it became the first Marxist-Leninist country in Africa. To draw the symbol of revolutionary change, the regime created a new national anthem and chose a new flag.

It had a red square with the country’s new national emblem – a golden star with an overlapping hammer and a tilted shovel surrounded by a wreath – in the upper left canton.

The Red Flag lasted until 1991, when economic problems and the weakening of the Soviet Union’s culmination of the 1989 revolutions led to democratic elections and, ultimately, the collapse of the Democratic Republic of the Congo. The National Conference, which oversaw the transition to a democratic government, returned the original flag from 1959 to June 10, 1991. Also, the colors and shapes on the flag are in Article 5 of the Constitution of the Republic of the Congo.

The colors of the flag have cultural, political, and regional meanings. Green symbolizes Congo agriculture and forests, while yellow represents the “friendship and nobility” of the Congolese people.

However, the symbolism of red remained unexplained. From a continental point of view, green, yellow, and red are the colors of the Pan-African movement. This is the only pan-African flag that uses a diagonal pattern in its design.

They are also the same colors that remain in the flag of Ethiopia, Africa’s oldest independent country and the only nation other than Liberia, to remain independent of Africa in symmetry.

The Republic of the Congo

Congo Brazzaville is located in Central Africa and borders Gabon, Cameroon, the Central African Republic, the Democratic Republic of the Congo, and the Angolan-owned Bronb‌m Cabinet.

The inhabitants of the Congo until the fifteenth century were mainly Pygmies (dwarfs), and from the fifteenth to the 19th century, many Congolese enslaved.

In the nineteenth century, the French explorer Duke Pierre Savornian arrived at a remote outpost called Braza Ogo in Netamo and named it Brazzaville (City of Braza).

In 1880, the Savarnians made a treaty with one of the local tribal chiefs, according to which the region became “under the protection” of France. Between 1885 and 1887, the borders of this new French colony were drawn, and in 1891 it was officially renamed the French Congo.

In 1958 the region became an autonomous republic within the French colonies, and a former nationalist priest, Fulbert Yolo, became its prime minister.

Congo Brazzaville gained full independence in 1960 and became known as the Republic of the Congo. Fulbert Yulu became president and formed a three-party coalition government.

In 1962, President Yulo merged the three parties into the National Revolutionary Movement. The president did his best to keep Joseph Cassavobu, a member of the Bakongo tribe, in power.

Masamba continued his left-leaning moderation and improved the country’s relations with the Congo Kinshasa after Colonel Moboto took power there.

On September 4, 1968, Marin Nguabi came to power and became president. During this period, the Congolese Labor Party was declared the only authorized political party.

It based on Marxism-Leninism, and Nguyab was elected secretary-general of the Congolese Labor Party. In 1970, the Republic of the Congo declared its existence.

Nguabi’s foreign policy focused on relations between the Soviet Union and France, and he called for closer ties between the two countries.

The Congo achieved a civilian government led by its president, Dennis Sasso-Negsu, and at the same time secretary-general of the Congolese Labor Party.

Also, In July 1987, a military coup against the Sasso-Negsu government failed. In September of that year, Sasso-Negsu succeeded in suppressing an insurgency in the north with the help of French forces.

At the end of 1989, an opposition party called the Alliance for Democratic Democracy was formed. In 1991, Sasso-Negsu announced its plans to turn Congo into a democracy.

In 1992, a new, democratic constitution was adopted and the country was renamed the Republic of the Congo. The Congolese Labor Party’s monopoly on politics was also lifted.

In the 1992 parliamentary elections, the All-African Union for Social Democracy (UPADS) became the largest party.

In 1993, the African National Union for Social Democracy won the election again, but the opposition accused the party of rigging the election. The riots and riots between 1993 and 1997 left many dead.

In 1996, freedom of expression was banned and the free press was put to an end.

Former President Dennis Sasso-Nagsou, who returned to the Congo after staying in France, was by President Pascal Lisuba as a potential threat. Luba ordered the army to besiege Sasso-Nagsu’s house, but militants serving in Sasu-Nagsu resisted the siege.

Sasso-Negsu escaped, and later in October 1997, with the support of his military forces and Angola, staged a coup d’état to become president. He then promised to bring democracy back to the country after three years.

The Congo is located in the central-western part of South Africa. To the south and east is the Democratic Republic of the Congo.

It also bounds on the west by Gabon, on the north by Cameroon and the Central African Republic, and on the southwest by Cabinet (Angola). It has a short beach in the Atlantic Ocean.

The capital, Brazzaville, is located on the banks of the Congo River in the south of the country.

Southwest of the country is a coastal plain that is the primary drainage of the Coelho-Niari River. The interior of the country consists of a central plateau between the two basins to the south and north. Forests are under increasing exploitation pressure.

The dry season is from June to August, while in most countries the wet season has two maximum rainfalls: one in March-May and the other in September-November.

3 thoughts on “Flag of the Republic of the Congo”

Flag of the Republic of Bulgaria

Mon Dec 21 , 2020
The Bulgarian flag, adopted in 1991, consists of three horizontal stripes in white, green, and red. Originally, because it had the usual colors of the Pan-Slavic, it was very similar to the Russian flag, however, the blue bar was replaced with a green one in 1878, so that it better […] 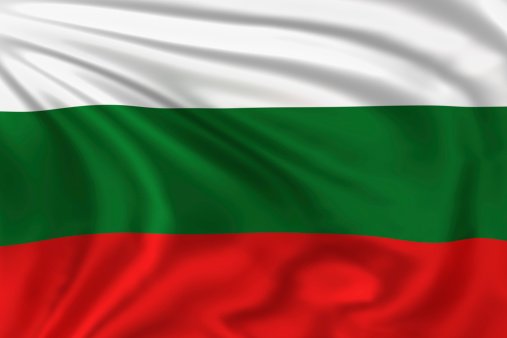