The national Chile flag is a flag consisting of two unequal red and white stripes with a blue square equal to the height of white, and a five-pointed star in the blue square.

This flag was adopted on October 18, 1817. This flag is La Estrella Solitaria (Spanish) in Chile.

The first state flag displayed from 1812 to 1814. The flag appeared two years after the country’s liberation from Spanish influence.

The flag has three horizontal lines equal to blue, white and yellow. It called Patria Vieja and, according to one version, was a symbol of the country’s nature (blue sky, snowy mountain peaks and wheat fields).

In 1817 a new version of the flag displayed . It was a triangle of blue, white and red stripes. Its creator inspired by the flag of the French Revolution, but because of its resemblance, other never officially accepted it.

Subsequently, in 1817, the modern Chilean flag emerged. It is painted in the same colors as the previous color, but has a different composition.

The fabric is two unequal horizontal strips. At the bottom, there is a red stripe along its entire length, which symbolizes the bloodshed for independence.

At the top, there is a white and blue bar that is equal to the square of its width.

As in the first version, the white bar means the snowy peaks of the Andes. The blue square is located near the pole. It means the sky and ocean.

Inside it is a white five-pointed star that symbolizes the path of progress and development as well as the independence of the country.

It is a common belief that the color of the Chilean flag represents the sky and the Pacific, the snow-capped Andes, and the bloodshed for the independence of the nation.

The star in Canton is thought to be a reference to independence, while others believe it is a sign of pride and progress.

The colors of the Chilean flag are believed to have been inspired by the flag flown by Mapuche during the Arauco War.

Three colors are in the design of the Chilean flag: red, white and blue.

There is a horizontal bipolar piece in white and red, each of which represents the Andes Mountains.

There is a blue canton that represents the sky and the ocean. In the center of the canton is a white pentagonal star.

About the Republic of Chile

Chile, officially the Republic of Chile , is a country in South America and Santiago is its capital.

In the map of South America, Chile is drawn like a long, narrow strip between the Andes Mountains in the east and the Pacific Ocean in the west.

This country, along with Ecuador, is the only country in South America that does not share a border with Brazil. The length of the country’s coastline with the Pacific Ocean is 6435 km.

Native Americans settled in the fertile valleys and coasts of what is now Chile ,about 10,000 years ago. The Incas also once expanded their empire to parts of present-day Chile.

In 1520, Ferdinand Magellan, who wanted to travel around the world by sea, crossed a canal in southern Chile, now the southern part of Chile that Magellan crossed is the Magellan Strait.

But in 1540, Pedro entered Chile in Valdivia under the command of Francisco Pizarro, one of the Spanish commanders and conquerors of Peru, and began the process of conquering the region.

Valdivia is also the founder of Santiago, the current capital of Chile.

The Mapuche people revolted against Spanish colonization in 1553, which eventually led to the assassination of Pedro Valdivial, the Spanish dictator of Chile.

In the following years, the Mapuche revolted against the Spanish colonialists several times.

The occupation of Spain by French forces and the enthronement of Joseph, brother of Napoleon Bonaparte, in Spain accelerated Chile’s independence process.

But subsequent attempts by the Spaniards to retake Chile led to numerous disputes between the Chilean independence movement and the Spanish military.

In 1817, Fernando O’Higgins, the most famous Chilean nationalist, crossed the Andes with Jose de San Martin, the hero of Argentina’s battles for independence, and defeated them in Chile against the Spanish monarchists.

Following the defeat of Spanish forces on February 12, 1818, Chile declared independence and the country came under Higgins.

The population of this country is about 16928873 people and the currency of the country is the peso of Chile.

The official language of the Chilean people is Spanish and it is generally spoken by the people.

The type of government in Chile is now a republic. In general, Chile is a country with a somewhat monotonous population, and most of these populations are of Spanish descent, with varying degrees of mixing with the region’s Native Americans.

Chile’s urban areas are home to about 85 percent of the country’s population, of which 40 percent live in the metropolitan area of Santiago.

We said that the language of the Chilean people is Spanish, but we must say that understanding the Chilean and dialect of Spanish is difficult due to a series of changes and the removal of some sounds, and it is difficult and incomprehensible for non-Chileans.

For this reason, anyone who is new to this country or even those whose language is Spanish has a difficult Chilean dialect.

Also, the national culture and symbol of this country is a red Kopihui flower.

Chile, as a long, narrow coastal country in the form of a southern cone on the west side of the Andes Mountains, stretches from north to south for 4,630 km, with the largest width of the country from east to west being only 430 km. This country has very original and diverse landscapes.

It is comparable in size to Zambia, and is slightly larger than the US state of Texas.

5 thoughts on “Flag of the Republic of Chile”

Flag of the Republic of the Philippines

Sat Sep 5 , 2020
The Filipino flag is one of the oldest flags in the Pacific. It is inspired by the flag of the Katipunan. They were a group opposed to the Spanish government also ruled the islands during the colonial period. The design of the flag shows the strong influence of different ethnic […] 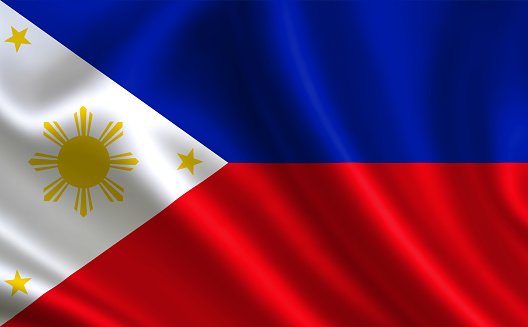