Unlike other flags that represent a specific entity or organization, the Cascadian flag is of a broad continental bioregion.

It is an unofficial flag for the Cascadian region. The Cascadia bioregion roughly encompasses the U.S. states of Idaho, Oregon, and Washington.

The Canadian province of British Columbia, and other parts of North America’s Pacific Northwest.

The Cascadian flag is also known by its other names such as:

The name of Doug flag, is taken from Douglas fir appears on the flag. It was Alexander Baretich—a native of Portland, Oregon—who first designed and created the Cascadian flag

The tricolor flag of Cascadia has a strong affinity with nature; either of its colors symbolizes a different natural element of the Cascadian bioregion.

Symbolism and conception in Cascadian Flag

Alexander Baretich who designed the flag in the mid-1990s.

He has said about the flag:

I designed the Cascadian flag, aka the Doug, way back in the mid-1990s. When I was a graduate student studying in Eastern Europe.

Though I totally love the people, cultures, and landscape of Eastern Europe.

I was deeply homesick for the forests of Cascadia, specifically the Willamette Valley forests I grew up around.

One day as I sat on a hill with my companion. I had this vision of a flag where the Cascadian landscape came to mind.

Prior to the design and its popularity, the idea of Cascadia–specifically the bioregion. It was pretty much an abstract concept reserved for radical geographers and hip sociologists.

The flag conveys something far more tangible than an abstract concept of demarcation of space; the flag captures that love of living communities in our bioregion.

Unlike many flags, this is not a flag of blood, nor of the glory of a nation, but a love of the bioregion; our ecological family and its natural boundaries; the place in which we live and love.

Basically, the flag consist of three horizontal stripes, and a Douglas fir in the middle of it stands vertically.

The flag characterizes the natural beauty of the bioregion of Cascadia. The three defining and most prominent natural elements of Cascadia are the water resources, the green forests, and the snow.

Description of the symbolism:

The blue stripe represents the sky, the Pacific Ocean, and the Salish Sea. As well as the myriad of rivers in the bioregion including the Columbia, the Snake, and Fraser Rivers.

The white represents clouds and snow and the green represents the region’s countless fields and evergreen forests.

The tree symbolizes “endurance, defiance and resilience against fire, flood, catastrophic change, and ever increasingly against the anthropocentric man”

There is a close connection between Cascadian bioregionalism and environmental activism. The term, bioregionalism, came into being in the 1970s.

A collaboration between a group of people including natural scientists, social and environmental activists.

With community leaders, writers, artists, and locals who were directly involved with natural resources, formed the present-day bioregionalism concept

A bioregion is specifically a natural environment with unique and specific natural characteristics.

The main features of bioregions are including:

Local aspects of seasons, a unique formation of the land, native plants and animals, soil, and watersheds. People, too, are count as an integral part of local life in bioregions.

The Cascadian bioregion is a broad area stretching from the Copper River in Southern Alaska, to the east as far as the Yellowstone Caldera and continental divide and Cape Mendocino in the South.

Cascadian bioregionalism comprises connected environmental, economic, and cultural affinity throughout the U.S. Pacific Northwest which differentiates it from its counterparts in the east.

The National Flag of Canada

Sat Jun 27 , 2020
The Canadian flag display proudly with red and white colors and a maple leaf inside. But has Canada always shown this flag to the whole world with pride and independence? Let us take a look at the history of Canada and the Canadian flag.  Canadian flag The national flag of […] 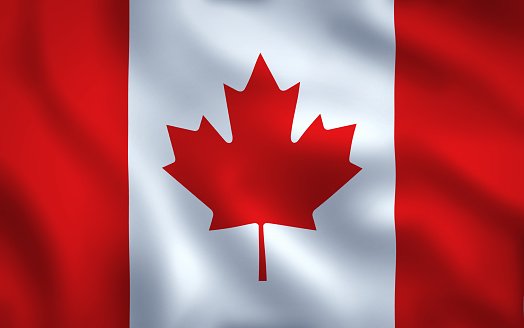