During the Byzantine Roman Empire 324-1453. There is a variety of imperial, state and navy flags, symbols and emblems. That they use always with the common elements of the cross and the double-headed eagle.

The cross was the official flag of the Byzantine state. The double-headed eagle existed also as a flag of the Empire in the late centuries but mostly as an Imperial emblem.

Due to the use of the cross in the modern Greek flag, the majority of the population think the double-headed eagle represents the Byzantine Empire, for a reason.

The same, it is also the flag of the Church, to date, the double-headed eagle flying all over the churches and monasteries in Greece and still, Koine Greek spoken in the liturgy, this is the reason the majority of the population connect more frequently this symbol to the Empire.

Emperor Michael VIII Palaiologos recaptured Constantinople from the Crusaders in 1261, from a state-based in Asia Minor.

The double-headed eagle symbolized the dynasty’s interests in both Asia and Europe and keep despite the fact that virtually all of the Asian possessions were gobbled up by the Ottomans within a generation of the recapture of the city.

Michael’s descendants stayed on the Byzantine throne until the city and the Empire fell to the Ottomans in 1453.
The double-headed eagle had in the two centuries of Palaiologos rule become identified not just with the dynasty but with the Empire itself and, more generally, with institutions and cultural ideas outside the Byzantine Empire that still remained centered on Constantinople.

Most obvious of these is the Greek Orthodox Church, the place is on center in theory in Istanbul to this day, and so it is not surprising that the Church would use the flag.
Less obvious is the reason for its use by the Russians. In 1453 a flood of Byzantine churchmen and nobles fleeing the Ottomans ended up in Moscow, the center of the last free major Orthodox polity.

The former Princes of Suzdal adopted this more or less coincided with the adoption of the title of Czar (Caesar, or Emperor).

Who had been ruling from Moscow and had united much of the Russian-speaking world.

Moscow began to refer to as “the Third Rome” (Constantinople being the second), and the Czars saw themselves as successors in the Orthodox world to the Byzantine emperors. Thus the adoption of the double-headed eagle by them.

The single-headed Roman imperial eagle use in Byzantium, although far more rarely.

They carried bore any resemblance to the legionary aquilae. Eagle-topped scepters were a frequent feature of consular diptychs, and appear on coins until the reign of Philippikos Bardanes .

It continued in use in bas-reliefs in churches and funerary monuments until well into the 11th century, however.

In the last centuries of the Empire, it recorded as being sewn on imperial garments. And shown in illuminated manuscripts as decorating the cushions (suppedia) on which the emperors stood.

The eagle symbol, in general, was prominent in the Roman and the Byzantine Empire. And was representing power and dominion in both nations.

At the time of the breakup of the Roman Empire and the rise of the Byzantine out of Constantinople.

The double-headed eagle refers to the two “sides” of the Empire around Constantinople – Europe and the Near East (western Asia).

The insignia started to see regularly in the 11th century in various artworks. And it wasn’t known to be in connection with the Empire or its leadership until at least a century later.

Though the double-headed eagle has remained as a prominent symbol.

It’s a bit misleading that it was an actual insignia of Byzantium.

Not only was it late to the Byzantine party yet claim to be a genuinely Byzantine insignia.

it’s supposedly not originally from Byzantium, but rather noted on some rock-carvings from the Hittite era.

Byzantium was an important aspect of world history, serving as a bridge from the Roman Empire to the Renaissance in Europe.

However, it can be said that Byzantium was more important in transitioning Roman. And Greek innovations into more modern times, rather than coming up with much originality.

And this can be applied as well to Imperial insignia which didn’t originate in the Empire, but instead take from earlier applications.

Known as a tetra grammatic cross, the Byzantine cross was seen on a lot of battle flags and flags that flew over the Empire in various locations.

While not necessarily a “national flag,” the gold or silver cross that bisected the flag and had four “beta”. In each red field in the corners was a prominent look for much of the Empire’s existence.

The cross didn’t originate in Byzantium, as the cross shape on the flag saw several Roman Empire flags. And banners earlier than the 6th century.

The insignia was very prominent toward the end of the Empire in the 14th and 15th centuries, but it had some roots dating back to the early days of the Roman Empire.

The meaning of the cross has been a subject of much debate, as even modern-day scholars can’t seem to agree.

The official flag of the Vatican city

Fri Jun 12 , 2020
The Catholic flag also known as the official flag of the Vatican State was adopted on 7 June 1929. The same year Pope Pius XI signed the Lateran Treaty with Italy, creating a self-governing state under the sovereignty of the Holy See. History The catholic flag’s design is originally based […] 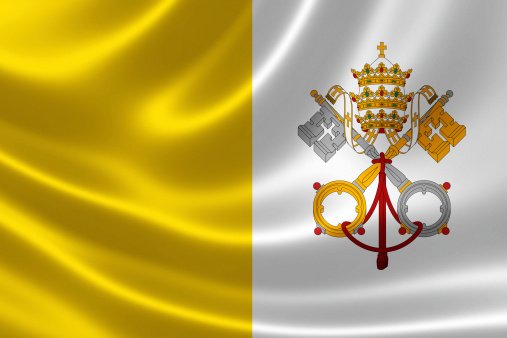