The Bulgarian flag, adopted in 1991, consists of three horizontal stripes in white, green, and red.

Originally, because it had the usual colors of the Pan-Slavic, it was very similar to the Russian flag, however, the blue bar was replaced with a green one in 1878, so that it better reflects the agricultural character of the country.

The white ribbon represents peace, the green of the soil and the red symbolizes the courage of the Bulgarians.

Until 1990, the upper left had a lion symbol surrounded by ears of wheat, tied with a red ribbon with inscriptions 681 and 1944.

In 681, this government was established and in 1944, it was liberated from the Nazis. After the collapse of the Soviet Union, the marker was removed, leaving only three colored stripes.

The Bulgarian flag was originally adopted in 1879 after the Russian-Turkish war. The nation ratified the flag after gaining independence. However, the scheme has not been used consistently since then.

In the 1940s, the flag was changed to include the coat of arms of the People’s Republic of Bulgaria.

In 1971, the flag was changed to change the date on the ribbon on the logo. The flag was changed again in 1990 following the fall of communism. It was at this time that the original design, adopted in the nineteenth century, was used again.

The 1991 Constitution describes the national flag.

The national flag of Bulgaria has a triple horizontal design. Although the design looks simple, like other triband designs, the colors represent important features of the nation and its people. In the next section, we will examine the meaning of each color.

The Bulgarian flag has three different colors in the horizontal tribune design. The size of each band is the same. Also, the top group is white and represents peace. The middle bar is green and shows the fertility of the soil. Finally, the bottom band is red and is a symbol of Bulgarian courage.

An unofficial flag that features the nation’s coat of arms also commonly used throughout Bulgaria.

The Republic of Bulgaria

The country has a population of 7,364,570 (in 2011), which is declining by 1% each year. Bulgaria has the highest negative population growth in the world.

Also, the official language of the country is Bulgarian and the currency is the Lev with the Estonian component. About 85% of the population is Bulgarian and the rest are mostly Turks and Gypsies. Bulgaria covers an area of 110,994 square kilometers and is the fourteenth largest country in Europe.

The name Bulgaria is from the word Bulgaria and means colorful fragrant skins. The Bulgarians were mostly nomads who conquered Slavic lands in the 7th century.

Bulgaria was a colony of the Byzantine Empire from the early 11th century to the late 11th century and later became an empire.

In 1396, the Ottomans invaded Bulgaria and added it to their territory. During this period, the people of Bulgaria revolted many times. On March 3, Bulgaria re-emerges and forms specific treaties.

In this country, Bulgaria is three parts, the North, the East, and Macedonia.

The three parts of the country have long been under the Ottoman influence. The history of Bulgaria is very wide and has formed a strange world and the country became fully independent in 1908.

During World War I, Bulgaria was an ally of Germany, and after the end of World War I, it joined Germany. Keep in mind that Bulgaria is one of the countries that has been able to provide a good ranking in the People’s Republic, and in general, the government tendencies in this field have a good ranking.

At present, after the collapse of the Eastern Bloc, despite all the efforts made, the economic system of this country is still agricultural and industry has no place in it. This is what has caused poverty.

Bulgaria has an agricultural economy with fertile soil and few other natural resources. Production is concentrated in large mechanized cooperatives. Major products include cereals (wheat, corn, barley) and fruit (grapes), and increasingly tobacco. Agricultural products form the basis of the food, wine, and tobacco industries.

Eastern Bloc loans have contributed to the development of industries such as engineering, fertilizer manufacturing, and chemicals.

Following the socio-economic and political unrest that engulfed Eastern Europe after 1990, trade alcohols in the region were disrupted. Bulgaria, whose trade relations with the Soviet Union were particularly close, suffered from severe shortages of many goods, including oil, more than most Eastern European countries.

The Bulgarian economy as a whole grew by 1.7% in 2011 compared to the previous year. Also, the European Commission’s economic forecast for Bulgaria’s overall growth in 2012 was 0.5 percent, while the International Monetary Fund had forecast 0.8 percent GDP growth in 2012.

The 2,000-megawatt Kazelod nuclear power plant supplies more than 35 percent of Bulgaria’s electricity, and extending the lifespan of the 2,000-megawatt reactor to more than 20 years has become a priority for the Bulgarian government.

83.9% of the population of Bulgaria are Bulgarians and 10% are Turks and Gypsies. Many scholars trace the origins of the Bulgarians to the Turkic-speaking tribes of Central Asia (possibly with Iranian ancestry).

There are also groups of Russians, Romanians, Armenians, Greeks, and other small minorities in the country. Less than 0.1% of the population is infected with AIDS. The official language of the country is Bulgarian.

76% of the population are Orthodox Christians, 10% are Muslims and 11.8% are atheists. There are 80,000 Alawite Muslims in Bulgaria. The spread of Islam in Bulgaria traced back to the conquest of the country by the Ottoman Empire.

Bulgarian is an Indo-European language of South Slavic origin, the closest to which is Macedonian, and its speakers understand Macedonian.

The number of these words is about 1000, which has entered this language mostly through the Turkish language and during the 500 years of Ottoman domination over this country.

The people of Bulgaria are very restrained, and in this country, the way of life has certain conditions. Bulgarian people are very dynamic and put a lot of effort into their lives.

The food culture in Bulgaria is based on Eastern European cuisine. In this country, people talk less when eating.

In the culture of the people of this country, shaking hands is a must. The hijab of Bulgaria is very common and people try to wear it. In this country, giving souvenirs is a very important issue.

In the north of the country, the Republic of Romania shares a 608-kilometer border. It borders to the west by the former Yugoslav Republic (Serbia with a border length of 318 km and Macedonia with a common border of 148 km).

The Balkan Mountains run from east to west and central Bulgaria. In the north, the low hills slope to the Danube River.

The highest point of the country is the 2,925-meter-high Mosul Mosque, located in the Rila Heights in western Bulgaria.

The north has hot summers and cold winters, while the southeast has a Mediterranean climate.

Most of Bulgaria has a cold and mountainous climate, and the coastal areas of the Black Sea have a temperate and humid climate.

The most important river is the Maritsa River, which originates from the Rhodope Mountains in western Bulgaria and passes through the central regions of the country to the south and enters Turkey, and then flows into the Aegean Sea. Another river is the Danube, which flows in northern Bulgaria.

Flag of the Republic of Mali

Mon Dec 21 , 2020
The national tricolor Mali flag is equal to three vertical stripes. The left bar is green, the middle yellow and the right bar is red. Green symbolizes hope, nature, and fertility. Yellow indicates purity and indicates mineral richness. Red refers to bloodshed for power and independence. History The flag is […] 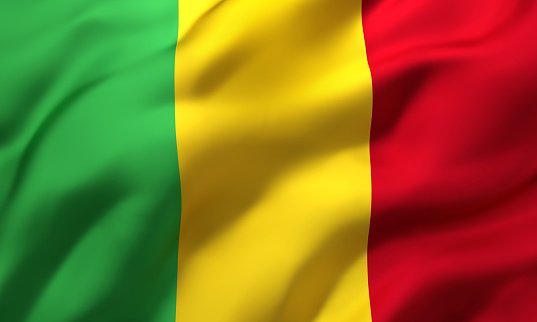