Like many other flags, the Brunei flag stands for both the nation itself and the sultan who rules it. It has changed several times to take into account changes in the national government, but the design of the flag has remained considerably constant over the years.

Brunei is even one of the few nations to have gained full political independence from the British Empire without adopting a new flag to commemorate the event.

The Brunei national flag was adopted in 1959 when the country was under British protection and was retained when the country gained full independence on January 1, 1984, as the Brunei Darussalam (Brunei State of Peace).

Also, the flag bears the Brunei national emblem in the center, on a yellow field. The square is cut by black and white diagonal strips, although they are officially called parallelograms.

The emblem is as follows: Crescent (symbol of Islam) with a wooden umbrella (symbol of the monarchy) and two gloves on both sides. Under the crescent is a ribbon.

On the crescent and ribbon of Arabic inscriptions with the translation “Brunei State, the Place of Peace” and the Brunei slogan, “Always in God’s service” in Southeast Asia, yellow is traditionally the color of royalties and the royal standards of Malaysia and Thailand with the flag of the presidency. The Republic of Indonesia also uses a yellow background.

The Arabic slogan on the crescent is translated like this, always serve with God’s guidance. Below it is a scroll of the Brunei inscription of Darussalam, the official title of the country, meaning the city of peace.

Brunei’s oldest known flag was a solid yellow square with no logo on it. Brunei adopted the modern flag prophecy in 1906 when it became a country under the protection of the British Empire. The new Brunei flag had the same yellow background and stripes as the modern flag but did not include the nation’s crown.

The crown was added to the flag only in 1959, the year the country adopted a new constitution. Brunei gained full independence from Britain in 1984, but unlike many other nations, did not ratify the new flag at the same time. He easily retained the flag that he had represented for two and a half decades and still represents today.

The Brunei flag shows the crown of the country and a pair of black diagonal stripes on a yellow ground. Yellow traditionally represents the monarchy in Brunei, which made it a natural choice for the flag that should represent the ruler and his nation.

The Brunei national emblem of Darussalam, designed by the third Brunei king, Sharif Ali, was officially adopted in 1940. It consists of five main components: the swallow’s tail flag, the parachute, the four-feathered wings, the two raised hands, and the crescent moon.

The swallowtail flag and the sun umbrella represent the monarchy. The four feathers symbolize justice, peace, prosperity, and peace. Below this, the crescent moon represents Islam – the religion of the Brunei government.

On both sides, the two prominent hands represent the government’s commitment to maintaining and promoting the well-being of its citizens and supporting the people.

Brunei national slogan: “Always serve under the guidance of God” appears in yellow Arabic script on the crescent and on the ribbon (scroll) under the crescent, Country name: Brunei Darussalam (“Brunei, place of peace”) is written in Arabic script.

Brunei, officially the country of peace, is a country on the island of Borneo in Southeast Asia, whose capital is the port of Sri Lanka. The official name of this country is “Brunei Country of the Land of Reconciliation”.

The name “Brunei” is derived from the Sanskrit word “Varun” meaning ocean. This small Muslim-majority country is located in Asia, best known for its royal name and legendary wealth.

The population of this country in 2020 is equal to 436 thousand people and its official language is Malay.

Brunei is located next to Malaysia and in fact in the past along with other parts of Malaysia was one of the British protected countries. Brunei is the only section in the category that in 1963 chose to remain under British protection and not join Malaysia.

The country gained independence from Britain in 1984 and has one of the highest living standards in the world due to its abundant oil and gas resources.

From the fourteenth to the sixteenth century AD, Brunei Darussalam was a powerful monarchy that extended over Sabah, Sarawak, and the lower Philippines.

Thus, the current sultan represents one of the oldest continuously ruling dynasties in the world. The Brunei Empire of Darussalam was destroyed by war, piracy, and the colonial expansion of European powers.

Also, in 1847, the Sultan made a treaty with Britain, and in 1888 Brunei Darussalam was formally under British protection. In 1906, a residential system was established in Brunei Dar es Salaam.

A British resident introduced as the representative of the British government to advise the sultan on all matters except customs, Malay customs, and Islam.

The 1959 agreement established a written constitution that would give Brunei Darussalam internal autonomy. In 1971, the agreement amended to ratify full internal independence except for defense and foreign affairs.

On January 1, 1984, Brunei Darussalam regained its full independence, and the Sultan became the Prime Minister, Minister of Finance, and Minister of the Interior, chairing a six-member cabinet.

In October 1986, the cabinet expanded to 11 members, leaving His Majesty’s finance and home affairs departments and taking over the defense portfolio held by his late father since 1984. To a full minister and create the Ministry of Industry and Primary Resources to strengthen the development of the country.

Brunei’s economy is based on exports of oil, timber, rubber, and natural gas to Japan. Oil discovered in 1929. Extraction of large oil and natural gas reserves has made Brunei one of the highest per capita incomes in the world, with most of the country’s food needs to be imported.

Brunei culture is predominantly Malay (indicating its ethnicity), with many influences from Islam, but more conservative than Indonesia and Malaysia.

Influences on Brunei culture come from the Malay culture of the Malay Archipelago. There have been four periods of cultural, animist, Hindu, Islamic and Western influence.

Islam was very influential and accepted as a Brunei ideology and philosophy. The main official language of Brunei is Malay but English is also because it is a compulsory subject in most schools.

As a Sharia country, the sale and public consumption of alcohol prohibited.

Non-Muslims allowed to import a limited amount of alcohol from abroad for their own private consumption.

Brunei is a country in Southeast Asia that consists of two interconnected areas on the island of Borneo.

About 97% of the population lives in the greater western part (Blythe, Tutong, and  Brunei-Muara), while only about 10,000 people live in the eastern mountainous part (Tamburong region). The total population of Brunei as of July 2010 is approximately 408,000.

Other major cities include the port of Muara, the oil-producing city of Seria, and the neighboring city of Kuala Lumpur. In the Blythe region, the Panagia region is home to a large number of European immigrants. Due to the royal residence of the Dutch Shell and the British army and is home to several leisure centers.

Most of Brunei is in the native Borneo region of the rainforest, which covers most of the island. Mountain rainforest areas are located inland.

Tue Jan 12 , 2021
Anguilla is a British overseas territory and the Anguilla flag has a blue British flag in the canton and a badge with three dolphins. The emblem on the Anguilla flag stands for friendship, wisdom, and strength. Before the current flag, three more flags were raised in this country. The original […] 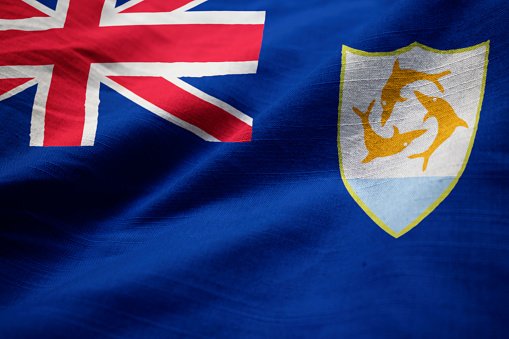