The Basque flag was created in 1894 by Sabino Arana and his brother Luis. The name of the flag in the Basque language is ikurrina.

Although the word means flag, it is actually only for the Basque flag. Although not the flag of a nation-state, it acts everywhere as a symbol of Basque unity.

ikurrina originally created only for Bizkaia (the main region of Euskadi) but became very popular and the rest of the Basque Country (4 regions in Spain and 3 regions in France) accepted it as the flag for Euskadi.

Initially, it was used only by the Basque Nationalist Party (founded by Sabino Arana on July 31, 1895), but during the Second Spanish Republic (1931-1931) it was accepted by all democratic parties.

In 1936, the Basque Autonomous Government formed, representing all Democratic parties, and ikurrina declared the Basque flag.

After the Spanish War, the ikurrina dictatorship was outlawed and completely banned as a symbol of separatism.

During World War II, there was a Basque brigade in the French Free Army.

After the last Spanish dictatorship, and with the approval of the Basque Autonomy, ikurrina again declared as the official flag of the Basque Country by law.

In the Basque Country, France, it has always been allowed, and after World War II, it was officially used in town halls with the French flag.

This flag was designed in 1894 to represent the province of Biscay in a set of one flag for each of the seven Basque provinces and one flag for the whole country.

However, because PNV activity outside of Biscay was low, only the Biscay flag was publicly recognized.

It was first erected at Euzkeldun Batzokija, a pre-EAJ-PNV club. The party ratified it in 1895 and in 1933 proposed it as the flag of the entire Basque Country.

Because the Basque people had accepted “ikurriña”, at the suggestion of Aznar’s socialist adviser, the Basque government adopted it as the flag of the Basque Autonomous Region in 1936.

The flag was used as the Basque Auxiliary Navy Jack, part of the Spanish Republican Navy that operated along the Bay of Biscay during the Spanish Civil War.

In 1938, after the military defeat of the Basque government, General Franco’s regime banned the flag – although its use continued in parts of the French Basques. In the decades that followed, the symbol became rebellious – the ETA’s first covert actions involved placing flags in public places.

The Basque flag legalized again in 1977 during Spain’s transition to democracy.

Two years later, the Basque government adopted it as the flag of the Basque Autonomous Community. It also used as an unofficial flag for some sections of the Basque community in other provinces.

This model, similar to the Jack Union model, was designed by the founders of the Basque nationalist EAJ-PNV party, Luis and Sabino Arana, and is commonly known as the national but unofficial symbol of the Basque Country (Euskal Herria).

It is widely in the Basque Country of France and is part of the unofficial flag of Saint Pierre and Miquelon, the French community in North America, which established by French Basques as well as many Spanish Basque sailors. Ikurriña is also the flag of the Basque Nationalist Party.

At first it was only a symbol of a part of the party (Biscay section) and many people thought that another flag represents this land.

And on them, the white cross, the symbol of God of the devotion of the Basque Catholics. Thus, red, white and green have become the national colors of the Basque Country.

The Basque Country is the name of the homeland and historical land of the Basque people, mainly in the northeast of Spain and the south of France.

Although this region cannot be considered as an independent state and is ruled by Spain, the people of this region have never recognized the sovereignty of Spain and have always sought secession from this country. This area is now more commonly known as the Basque Country.

The pioneer of the Gernika Statute was the short-term autonomous statute for Álava, Gipuzkoa, and Biscay, which was implemented in Biscay in October 1936, with the Spanish Civil War taking place, and when the Spaniards were automatically abolished, nationalist forces occupied the territory.

Prior to the Spanish Constitution of 1978 and its system of autonomous communities, these three provinces were known in Spanish as Provincias Vascongadas since 1833.

The political structure of the new autonomous community is defined in the Gernika Statute, which was approved by a majority vote in a referendum on October 25, 1979.

Today, this region is one of the most decentralized regions in the world. In this regard, the economist has explained that “it has more independence than any other country in Europe.”

Choruka dies in the Battle of Trafalgar. The Basque Navy is the key to the Castile Navy and later the Spanish Navy.

The Basque nationalist approved the abstention because the constitution was imposed on them without any Basque entry. For this reason, the “no” vote in this referendum in the Basque Country was higher than in the rest of the state.

It has always been a hot political debate. Basque nationalists often imposed this restriction on the transfer of power to concessions made to satisfy the military involved in the attempted coup d’état of F-23 (1981).

In 2003, the ruling Basque Nationalist Party (PNV) proposed amending the statute through the Ibarretxe scheme.

Despite the authority of the majority of the autonomous parliament, the two main parties in Spain (PSOE, PP) imposed a blockade on the debate in the Spanish Parliament (Madrid Cortes Generales), thus rejecting it for discussion by a majority in that parliament in January 2005.

Since the first autonomous cabinet, the Basque Nationalist Party has retained its responsibilities in the Basque Autonomous Community, with the exception of 2009-2012, led by Pattix Lopez (PSE-PSOE).

Despite the ETA ceasefire in 2011, the autonomous community has the highest police rate per 100 inhabitants.

As agreed with Spanish Prime Minister Zapatero in 2004, Urkullu intends to increase the number of retinas. While the Spanish Interior Ministry PP PP’s withdrawal from the police force, as demanded by the vast majority of political forces in the autonomous parliament Rejects Spain, even pointing to future Guardia Civil increases.

The Basque Country is bordered on the west by the province of Canterbury and the province of Burgos, on the north by the Bay of Biscay, on the east by France (Novell-Aquitaine) and Navarre, and on the south by Carioca (eyebrow river).

The territory has three distinct areas defined by two parallel ranges of the Basque Mountains.

The main slopes of the mountains form the basin between the Atlantic and Mediterranean basins. The highest point of the slope is in the Aizkorri massif (1551 m).

The three areas are:

Many valleys are formed by short rivers that flow from the mountains to the Bay of Biscay such as Nervión, Urola or Oria. The rugged beach has high cliffs and small entrances.

Between the two mountain ranges, the area is mainly occupied by a high plateau called Llanada Alavesa (Álava Plain). It is the capital Vitoria-Gasteiz is located. Rivers flow south from the mountains to the Eyebrow River. The main rivers are the Zadorra and the Bayas River.

From the southern mountains to the eyebrows is the so-called Rioja Alavesa. It has the Mediterranean features of other areas of the eyebrow valley.

The Basque Mountains form the catchment area and define the distinctive climatic zones of the Basque Country:

The northern valleys, in the Biscay and Gipuzkoa, as well as the Ayala valley in the valve, part of green Spain, where the oceanic climate prevails. With humid air all year round and moderate temperatures. The rainfall averages about 1200 mm.

The middle part is mostly influenced by the continental climate, but to a different degree than the northern oceanic climate. It brings hot and dry summers and cold and snowy winters.

Eyebrow Valley has a pure continental climate: winters are cold and dry. Summers are very hot and dry, with rainfall peaking in spring and autumn. However, due to its proximity to the ocean, the Basque eyebrows are milder than inland areas.

Flag of the Republic Eritrea

Fri Jan 1 , 2021
The Eritrean flag is one of the youngest flags in East Africa. The modern flag is a clear reflection of the nation’s history, as it combines the main flag of Eritrea with the flag of the Eritrean People’s Liberation Front, a political organization that played a key role in securing […] 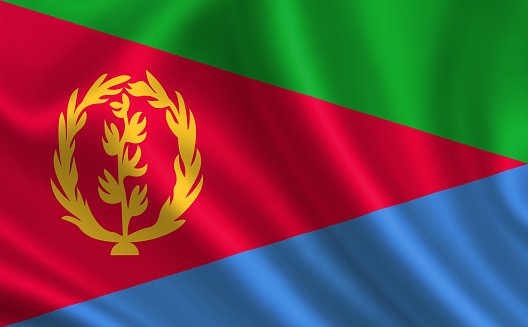