The Arizona Flag is the official flag of the state of Arizona. This flag has thirteen red and yellow rays that are placed in the middle and in the upper half of the flag.

The yellow and red colors of this flag are inspired by the color of the Spanish flag.

The 13 rays of the flag represent the 13 primary states of the United States of America.

These rays also represent the beautiful sunset of Arizona. The large colored copper star in the middle of the flag shows the Arizona copper mines.

The lower half of the flag is blue, indicating freedom.
The flag of the state of Arizona was formed in 1917 and consists of two parts.

The color of these beams is in honor of the Spanish flag carried by Francisco Vazquez de Coronado when he arrived in Arizona and discovered the area in 1540.
The second half of the flag is a simple blue and is the same color as the US flag.

The history of the Arizona state flag dates back to 1910, before Arizona was even a member of the union.

They asked Colonel Harris for a flag to go to the events with them, and he granted their request with a flag sewn by his wife, Nan de Hayden.

He and Hayden designed a flag that they believe this flag share of US history.

In 1912, Colonel Harris decided to slightly change the design of the rifle team flag.

He designed and proposed the Arizona flag to the then-governor of Campbell, hoping it would pass. At this point, Harris was an Arizona general.

The blue shade of freedom in the lower half of the Arizona flag is the same blue used in the US flag. The copper rays and the red sun in the upper half of the state flag represent the western sunset.

He selected 13 rays of the sun to represent the 13 major US colonies. Also, he chose the red and yellow rays because they are the colors that were flown by 1540 Spanish conquerors in search of the seven cities of Cibola.

However, on February 17, 1917, the flag was approved by the Arizona State Legislature as the flag of the state of Arizona. This flag is just one of many official state symbols for Arizona.

The design and color of the Arizona flag reflects the state’s history as well as its natural features.

These 13 rays mean not only the 13 major states in the United States but also the sunset that Arizona is known for.

The color of the star indicates the role of copper mining throughout the history of the state. Blue is a symbol of the Colorado River.

Four different colors are the design of the Arizona flag.

There is a five-pointed copper-colored star in the center of the flag. This star represents the mining of copper throughout the history of the state.

Finally, the bottom of the flag is blue and shows the Colorado River flowing through Arizona.

Arizona is one of the states in the southwestern United States.

The state also has a 626-kilometer international border with the Mexican states of Baja California and Sonora.

Arizona’s history of human habitation dates back to the arrival of the Indians, which occurred between 16,000 BC and 10,000 BC.

Before the arrival of the Europeans, there were several indigenous Indian tribes living in the area, the most famous being the Apaches, the Hopi, the Pueblo, the Zoni, the Mojave, and the Navajo.

The Navajo lived in dome-shaped houses called Hogan and have their special blanket weaving.

The Pueblo lived in brick buildings that were sometimes next to hills or caves. A Hopi village called Uraybi was probably in the early 1150s and is probably the oldest settlement in the United States.

Arizona’s history can be divided into Spanish, Mexican, and American periods.
The first European to arrive in Arizona was a Spanish priest who arrived in 1539.

He was followed by gold diggers and priests in Arizona for religious preaching. Eventually, the Spaniards began to build permanent settlements in the area, including Tobacco in 1752, and Tucson in 1775.

Arizona has been part of the Mexican state of Sonora since 1822, but at that time Arizona had a very small population.

After the American-Mexican War and the US occupation of the region, the Arizona area became part of the United States in 1848 as part of the New Mexico area.

Through the acquisition of Gadsden, the United States acquired the northern state of Sonora up to the Hila River in 1854, the state of present-day Arizona.

In 1863, Arizona seceded from New Mexico to form Arizona. Arizona was a remote area, but the arrival of railroads in the area in 1880 improved the situation.

Arizona officially became a state in 1912. The state was mostly rural at the time, and its economy was based on livestock, cotton and citrus trees, and copper mining.

Arizona located in the southwestern United States and is the sixth-largest state in the United States. Fifteen percent of the state’s 295,000-square-kilometer area is private land.

Arizona has desert landscapes and a variety of dry plants such as cactus. Arizona’s climate is also a highlight of the state. Hot summers and mild winters are typical of Arizona.

Like other states in the southwestern United States, Arizona has many elevations in addition to the desert climate.

Although Arizona is a dry state, forests cover 27 percent of the state, roughly equal to Germany and France. The largest collection of ponderosa pine forests is located in Arizona.

Due to its proximity to the Mojave Desert, Arizona has a hot and dry climate, with temperatures reaching 50 degrees Celsius in summer.

There are many Native American tribes in the north of the state, including the Navajo tribe near the Grand Canyon.

5 thoughts on “Flag of Arizona state”

Flag of Kansas state of USA

Sat Oct 3 , 2020
The Kansas flag consists of the state seal, a golden sunflower, and the word “KANSAS” on a blue background. There is a gold and white line between the sunflower and the state seal, which symbolizes the Louisiana Precinct Agreement, which bought the state from France. History State Flag from 1927 […] 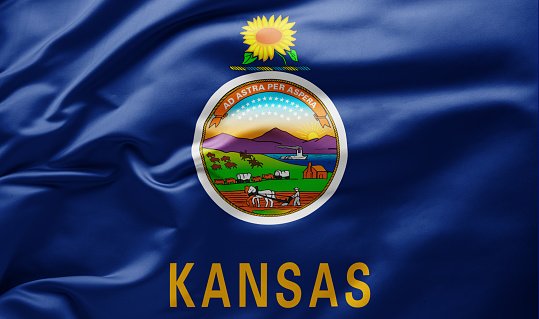