The Algeria flag consists of two vertical bars of equal size, a green bar on the left and a white bar on the right, as well as a red crescent that surrounds a red star in the center. The flag was officially adopted in 1962 after Algeria’s independence from France.

The history of the Algerian flag dates back to the 11th century during the Berber dynasties. Each dynasty had a flag that affected successive generations, and the Zayanian dynasty had a blue flag with a white crescent.

When the Ottoman Empire conquered Algeria in 1525, the flag had turned red with a yellow crescent in the middle.

Algeria united under Ottoman rule until 1830 when the French invaded the Ottoman Empire and raised their blue, white, and red flags as the official flag of Algeria.

When the struggle for independence reached its peak, the Algerian government-in-exile adopted a green and white flag, but the white group was larger, covering 75% of the flag instead of 50%.

The design was inspired by the flag used by Amir Abdul Qadir during the 1920s to represent opponents of French rule. This version of the flag was used until 1962 when Algeria became an independent country and adopted the current flag.

The Algerian flag has two vertical bands with a red star and a red moon crescent directly on the two bands. The crescent moon, the five-pointed star and the green color used on the flag are all symbols of Islam, which is the official religion of Algeria.

The green color on the flag is a symbol of Islam, the dominant religion in the region. It is also said that green is the favorite color of the Prophet Muhammad and his daughter Fatima and is the color of heaven in the Qur’an.

Red is a symbol of freedom and bloodshed for the liberation of the French in the struggle for independence. White represents the peace that was achieved after independence.

The crescent and the star are standard Islamic symbols that are a feature in almost every flag of Islamic nations.

The country has specific rules about the characteristics of national flags, including colors. One of these rules is that the green color used in the flags should be equal parts of yellow and blue and red should be “pure” red that does not have yellow and blue colors.

The People’s Democratic Republic of Algeria

Algeria, officially known as the People’s Democratic Republic of Algeria (Arabic: الجموریة الجزائریة دیمقراطية الشعبیة) is a country in North Africa, between Morocco and Tunisia. Its population is about 43,851,000

The capital of Algiers is Algiers and its official language is Amazigh and Arabic. The people of Algeria are Berbers and Arabs.

Algeria is bordered by Tunisia to the north, Libya to the east, Niger to the southeast, and Mali to the southwest. In the north of Algeria is the Mediterranean Sea.

The Berbers were the first people to live in this land from time immemorial. The Phoenicians first invaded the country in the 12th century BC and established settlements on its northern shores.

Also, Carthaginians then entered and occupied the eastern parts. After the overthrow of the Carthaginian government, the Romans conquered the land and ruled for some time on the coast of North Africa and the coastal lands of Algeria. The Vandals cut off the Romans from Algeria in 430 AD.

The people of Algeria converted to Islam at the beginning of the eighth century AD when the Arabs came to this land. From 644 to 656, the first Algerian Berber tribe to convert to Islam were the Maghrawis.

In 665, the Umayyad government launched its first invasion of the Maghreb. In 683, the conquests of Aqaba Ibn Nafi ‘began. Although the resistance of the Byzantines prevented them a little, the barbarians did not give up. On the other hand, it was the Maghrawis who joined the Umayyads from the beginning of the war.

In 708, the Umayyads continued to rule Algeria, ending the pre-Islamic period. As Latin and Phoenician languages ​​were forgotten, Algeria gradually converted to Islam.

After the conquest of Algeria by the Muslims, the Arabic language gradually gained its place among the urbanites.

Abu al-Muhajir Dinar was ruled by the Umayyads in 747 AD. With the rise of the Fatimids in Egypt, Algeria became one of their tributaries, but the dynasty (Sirians) who ruled on their behalf in Algeria and Tunisia revolted against them and adopted the Sunni religion.

To counter that dynasty, the Fatimids also sent the highly populous Benohalal tribe to the region to weaken that dynasty, and this was the beginning of the Arabization of the region.

After that, with the rise of the two Berber dynasties of Marabatan and Movahedan, who had emerged from the west, the region calmed down for a while, but with the fall of Movahedan, Algeria became the battleground of the three successor states of Algeria, Tunisia, and Morocco.

In the 15th and 16th centuries, Spain invaded Algeria and established several settlements on its shores.

Before the domination of France, it was considered an independent state, and the country was governed by a person called (da’i). Algeria was divided into three major provinces, and each province was governed by one person, known as Bai.

After that, independence ideas spread there and the Algerian people formed a free government and fought the French government. Their struggle led to Algerian independence (1962).

In the history of Algeria, the Berber, Phoenician, Latin, French, Spanish, and Turkish languages ​​have formed a kind of linguistic fusion that results in a very heterogeneous Algerian Arabic; A language that has taken different forms in different parts of Algeria and has continued to do so to this day.

The official language of the country is Arabic and French and Berber languages ​​are also used. 1.99% of the population are Sunni Muslims and 0.6% are Ibadis, and the rest are mainly Christians and theologians.

They have the religion of Islam (Sunni Maliki religion) and are Arabic and speak the local language of Amazigh and French, about 300,000 people are added to them every year.

The Arab-Berber issue has more of an identity aspect and is not a kind of racial or ethnic distinction.

The Berber tribes are divided into several ethnic groups: tribes in the north-central mountainous regions, Shawies in the mountains of the East Atlas, Mazabiyya in the Mazab valley, and Tuareg in the south.

A small number of black Africans also live in Algeria. Algerians of Turkish descent make up about 5% of the country’s population, living mainly in large cities.

Most Algerians speak Algerian Arabic. About 83% of the population speaks Arabic with the “degree” dialect.

The Berbers, who make up about 45% of the population, speak mainly one of the Tamazighet dialects. But most of them also know Algerian Arabic.

Arabic is the only official language of the country, but recently Tamazigh is a national language. The issue of language is politically significant and sensitive, especially for the Berber minority.

The government’s language policy of Arabization was mainly in response to the 130 years of French colonization and the spread of Arab nationalism.

French continues to be taught as a foreign language and taught to children in schools. The media and business sectors used French.

Most Algerians have been farming for a long time. Fruit and citrus cultivation is booming in Algeria. In this country, handicrafts such as Arabic needlework, Algerian carpets, leather making, inlay work, tile making, etc. are popular.

Although Algeria has many mines and high incomes from the sale of natural gas, the gap between rich and poor is wide. The state of industry and agriculture in Algeria is sluggish and does not create much capacity for employment.

Unemployment is particularly high among young people, and housing problems and scarcity have put pressure on the middle class to the poorer.

Algeria is a country in northern Africa, borders on the east by Tunisia and Libya, on the west by Morocco and the Sahara, on the southwest by Mauritania, on the north by the Mediterranean Sea, and on the south by Niger and Mali. Its area is about 7,381,471 square kilometers, which is almost three times that of France.

Among the major cities of Algeria, Algeria is the capital of the country, and Vahran, Constantine, Annaba, and Batna should be mentioned.

Algeria is the largest country in Africa in terms of area, most of Algeria’s coastal areas are mountainous and have few natural harbors. The area that starts from the shore and extends to the Atlas Hill is fertile. To the south of the Atlantic Atoll are steppes that extend as far as the Desert Atlas; the desert is further south.

The weather is slightly colder in eastern Algeria. One of the climatic features of Algeria is the occurrence of sandstorms. In Algeria, only the part of the desert that orbits Cancer is very hot. Rainfall along the beaches is high and is at 400 to 670 mm per year. Most of the rainfall is in the financial sector of eastern Algeria, which reaches 1000 mm per year.

Flag of the Republic of Angola

Sat Dec 19 , 2020
The Angola flag was first used on November 11, 1975. The flag is divided horizontally with a red stripe at the top and a black line at the bottom. Although the flag took its color from the ruling party, over time, the meaning and significance of the color changed to […] 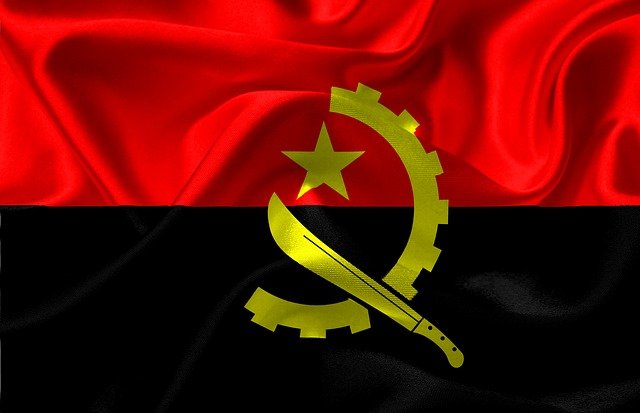