Albanian flag is a red flag with a two-headed black silhouette eagle on it.

The first adoption of the Albanian flag goes back to the time when the Ottoman Empire was defeated in the country in 1912 and Albania gained independence.

Among all of these different regimes, one thing was in common in their flags— all of them used the red flag with the double-headed black eagle

In a brief description of Albanian flag’s variation throughout the history, we can figure out these facts:

Principality of Albania flag  in the year 1914

In the Principality of Albania flag, there is an eagle with golden claws and beak and holds golden arrows. On its heads, there is a five-point white star.

In the year 1920—First Republic flag

In the First Republic flag, background remained the same red plain field but the eagle’s design a bit changed and there was no golden arrows

In the year 1928—Kingdom of Albania flag

Ahmet Zogu who was the president—of course, a dictator one—claimed himself as King Zog I. His flag varied from the previous versions with a royal crown above eagle’s heads and there was no golden claws and beak. The crown was the royal crown that was inspired by the helmet of Skanderbeg.

In the year 1939—Italian occupation flag

When Italy occupied Albania, they changed the Albanian flag too. Although they used the same red background but new arms of the kingdom were added to it.

They used two black fasces, the helmet of Skanderbeg in black and a red shield for their flag. Beneath the shield, there was a scroll of motto with FERT letters on it in red. Victor Emmanuel III was the king who ruled the kingdom of Albania at the time.

In the year 1944—Provisional government flag

This time the new Albanian flag appeared with a yellow five-point star although the background and black eagle remained intact.

Subsequently, the yellow star canton, replaced with a hammer and sickle which represented the communism. Communist party had a leading rule in driving out the German occupiers.

In the year 1946—People of Republic of Albania flag

In the new design, a five-point star with a golden border which added instead of a previous canton star. The new star was added right above the head of the black eagle.

In the year 1992—Republic of Albania flag

Finally, as the last amendment to the Albanian flag, only the red background and black eagle remained and the rest of the components they removed.

Since Albanians call themselves as the descendants of an eagle, they use a double-headed eagle as their national symbols. The original title for the Albanians is “Shkypetars,” which translates as,” the sons of the eagle”.

The double-headed eagle on the national Albanian flag represents the sovereign state of Albania. Likewise, the red color used in the Albanian flag, represents bravery, strength, and valor.

About the Republic of Albania

Albania or by its official name, the Republic of Albania, is a country located in south-eastern Europe. Its surrounding countries who share land borders are Greece, Montenegro, Macedonia, and Kosovo.

Also, Albania shares a maritime border with Italy, Greece, and Montenegro. The country has been part of many civilization and empires throughout history.

,Albanians established the Principality of Arbër, in the 12th century—the first autonomous state in the history of Albania.

And, they established the Albanian Kingdom. In the 15 century, the Ottoman Empire took over Albania.

The resistance against Ottoman—before the conquest of Albania—was under the leadership of Gjergj Kastrioti Skanderbeg.

The rebellion against Ottoman progression under the lead of Skanderbeg towards Europe existed in a broad area that included North Macedonia, Serbia, Montenegro, Kosovo, and Greece.

It was when Ottoman defeated in Balkan that modern Albania proclaimed independence in 1912. Not long after that, in the 20th century, Italy invaded Albania.

Then the German Nazis invaded Albania and titled it their protectorate state. After the Second World War, communism took over under the leadership of Enver Hoxha.

The current Albania is the result of the 1991 revolution that toppled Albanian communism.

Albania’s political system is based on a unitary parliamentary constitutional republic.

Albania’s economic categories in the upper middle income and service sector and manufacturing are the two dominant factors in its economy.

In 2009, upon receiving a full membership, Albania became the first member of NATO among southeastern European countries.

Albania has also applied for membership in European Union however it received “Official candidate” statues on its application in 2014. During the 2013 and 2017 parliamentary election, Edi Rama from the socialist party won the election and became the prime minister.

During his tenure as prime minister, Edi Rama brought some crucial changes in the economy, the judicial system, and law enforcement. For his reforms, gender equality was another important thing to consider.

As a result of his improvement to the economic, Albania becomes the 4th country in South-Eastern Europe with the lowest unemployment rate. His gender equality agenda resulted in 50% of female ministers in his cabinet since 2017.

This many female ministers at the same time serving the country has been unprecedented in the history of Albania.

2 thoughts on “Flag of the Republic of Albania”

Sun Jul 12 , 2020
The culture of using flags have come to America with Europeans. Native Americans whose distinguishing characteristics were based on art, dress, and symbols, started using flags as their tribal identity. According to NAVA (North American Vexillological Association), there were two defining factors in the proliferation of Native American flags in […] 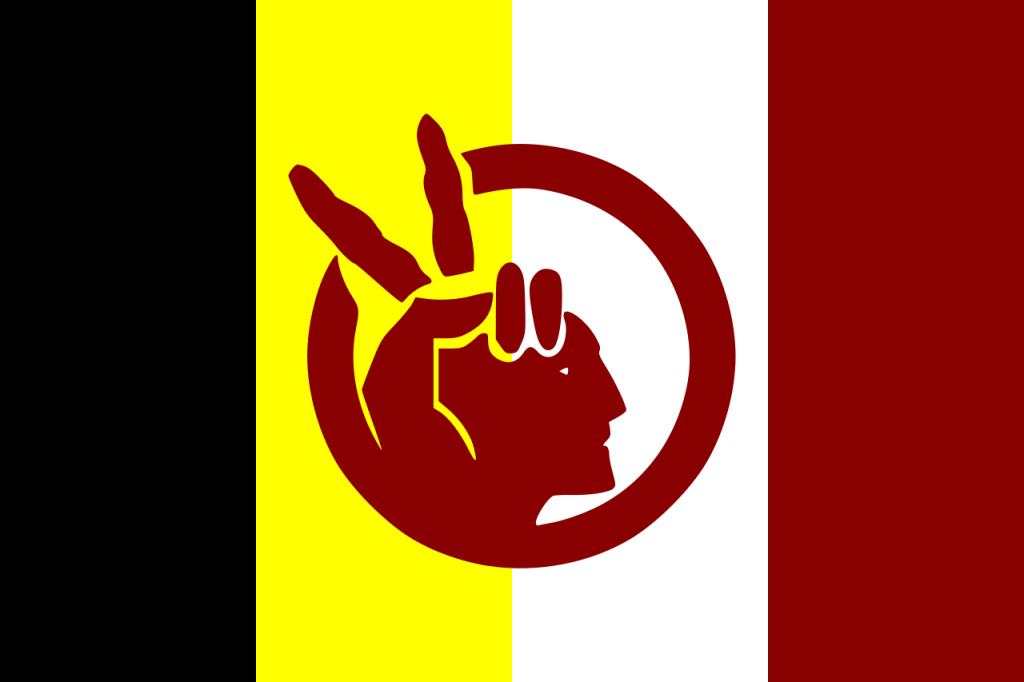