The Afghanistan flag was officially adopted on August 19, 2013. The three colors were inspired by Amanullah Khan during a trip to Europe in 1928. And the original design of the three-color horizontal flag is based on the German flag.

The Afghanistan flag is also one of six national flags in the world designed using a single building.

Also, the national flag of Afghanistan is in three colors, which include three equal bands (black), red and green. The classic national emblem displayed in white in the middle of the flag on the red band and slightly overlaps with the green and black bands.

The tumultuous past of the country, which faced many problems, symbolized in the national flag of the country. And, the dark color of Afghanistan’s dark past and turbulent history goes back to the 19th century when it was a country protected by the British Empire.

Red indicates bloodshed during the War of Independence, which ended with the signing of the Anglo-Afghan Treaty in 1919. Green is a symbol of hope and a prosperous Islamic future that will keep the nation alive despite its troubled history. The aspect ratio of the flag is 2: 3.

The first flag of Afghanistan was a solid black and white background representing the Hotak dynasty. Subsequent rulers added a white mosque to the center of the flag, a symbol found in most of the country’s future flags. The details of the design changed several times, but by 1928 it largely fixed.

It was that year that King Amanullah adopted a three-color flag of black, red and green.

The black ribbon was for all previous Afghan flags, the red ribbon was a symbol of the blood shed by the Afghan people to maintain their independence, and the green ribbon was hope for the future.

Even though the country’s flag changed regularly during the 20th century, these three colors present in most of the country’s future flags, with the exception of one red, black flag used only in 1929, a red flag used for Only two years while the country was under communist rule and the mostly white flags used when the Taliban came to power.

The modern flag of Afghanistan

The modern Afghan flag was adopted in 2004 after the fall of the Taliban government.

This is the traditional flag of the country. The flag is in three horizontal colors black, red and green with a white mosque in the center. There is a decorative border around the mosque that includes the name of the nation.

The flag of Afghanistan has a very interesting design with a deep symbolism behind it. The colors of the flag represent the various attributes and history of Afghanistan, including the bloodshed in the war for independence, prosperity and religion, and the turbulent past of the nation.

The national flag also has a national emblem that represents Islam and has the Arabic inscription of the Muslim religion and Takbir – the Arabic phrase “God is great”.

The Afghan national flag has three vertical tricolor bands. The colors used are black, red and green. Black symbolizes the dark and turbulent past of the nation. Green represents Islam and prosperity, while red represents the bloodshed of those who fought for the country’s independence.

This flag also has its national emblem which printed in white and its center is the flag. The national emblem shows a mosque, a pulpit and two national flags. This also includes the year of the Islamic calendar 1298 (or 1919, when the nation gained its independence from Britain), the wheat, Takbir, martyrs and the name “Afghanistan”.

Most Afghan flags have a national emblem. However, during the communist regime in the 1980s and the subsequent Taliban rule a decade later, the country’s flag removed.

The current flag contains national emblems. In the center of this logo is a golden mosque (mosque) with an altar and pulpit facing Mecca and a prayer mat inside. Images of two Afghan flags attached to the mosque on both sides.

Below this mosque are Eastern Arabic numerals for the year 1298 AD (1919 in the Gregorian calendar, the year of Afghanistan’s independence from the British Empire).

This central image is formed by a border consisting of wheat branches on the left and right. Wheat represents fertility and is very important in Aryan culture.

The Islamic Republic of Afghanistan

Afghanistan, officially known as the Islamic Republic of Afghanistan (Pashto: د افغانستان) is a landlocked country in South Asia. It is located between Central Asia, East Asia, and West Asia (Middle East) and its capital is Kabul. Afghanistan’s neighbors are Iran to the west, Pakistan to the south and east, Tajikistan and Uzbekistan and Turkmenistan to the north, and China to the northeast.

Afghanistan, although as a country and a nation, has a new history; However, this land is historically one of the oldest countries in the world.

The land of present-day Afghanistan is the junction of the great civilizations of the world due to its location on the Silk Road, and over the centuries, successive strata of identities, cultures, and beliefs have identified the land now called Afghanistan.

From the Paleolithic era and during historical periods, the people of Afghanistan, or the ancient Eastern Iranians, have played a major role in the introduction and spread of world religions and an important role in trade and commerce and have been the dominant political and cultural center in Asia.

In 1126, Ahmad Shah Durrani, one of the commanders of Nader Shah Afshar, after his death, ruled the eastern part of the Iranian plateau (Khorasan) and called himself the Amir of Khorasan. Afghanistan came under British rule shortly after independence.

Following the declaration of Afghanistan’s independence, the country established direct relations with other countries.

A short period called the Decade of Democracy emerged in this country in the last ten years of the reign of Mohammad Zahir Shah and ended with the coup d’etat of 1973 by Dawood Khan.

Dawood Khan, the son of Mohammad Zahir Shah’s cousin, was the last king of Afghanistan and became the first president of the country. In 1373, a spontaneous and guerrilla force called the Mojahedin was formed in this country, which defeated the 14-year-old communist regime.

The Mojahedin failed to form a national government and were replaced by the Taliban, who benefited from the material and moral support of Pakistan and Saudi Arabia.

The Taliban also failed to completely suppress the remnants of the Mujahideen who stood firm against them. The Taliban regime disintegrated in 2001 with an attack by the United States-led International Coalition.

In 2001, after the Bonn Conference, an interim government led by Hamid Karzai came to power as a result of an agreement reached between Afghan groups. The new government was formed in December 2004 under the presidency of President Hamid Karzai, and in 2005 parliamentary elections were held.

Afghanistan is one of the poorest countries in the world. Due to three decades of war and destruction, the country is left without prosperity and progress.

More than 42 percent of Afghanistan’s population lives on less than $ 1 a day, according to the United States Agency for International Development (USAID).

Afghanistan’s economy has been suffering from the events of 1978. Along with that, several droughts added to the problems of the people during the years 1998 to 2001.

However, after billions of dollars in international trade and foreign aid flowed over six years, the country’s economy grew slightly. About 81% of the population is a farmer, with the remaining 11% working in the industry (mostly knitting) and 9% in services.

According to a 2018 report by the World Bank, Afghanistan’s GDP per capita (GDP PPP per capita) is $ 2,225, which is the lowest among Asian countries, although this number has been growing since 2011.

Afghanistan is a predominantly tribal society, and different parts of the country have their own cultures as a result of ethnic differences and geographical barriers that push many away from the country.

The family is the mainstay of Afghan society, and families are often run by a patriarch. In the southern and eastern regions, people live according to Pashtun culture by following the Pashtunwali (Pashtun way).

The main principles of Pashtunwali include hospitality, providing a sanctuary for those who seek refuge, and revenge for bloodshed.

Pashtuns (and Baluchis) are mainly associated with South Asian culture. The remaining Afghans are culturally Persian and Turkish. Some non-Pashtuns living in Pashtun neighborhoods have adopted Pashtuns in a process called Pashtunization, while some Pashtuns have become Persian.

Those who have lived in Pakistan and Iran for the past 30 years have been most influenced by the culture of these neighboring nations. It is well known that the people of Afghanistan are highly religious.

Afghanistan is a land and mountainous country located between South Asia and Central Asia at 60 to 75 degrees east longitude and 29 to 38 degrees north latitude.

The highest point of the country is the Noshakh peak at 7,485 meters.

Afghanistan is geographically divided into three distinct regions; The northern plains of the country, which is mainly agricultural. The southwestern plateau, which has mostly desert and semi-arid landscapes, and the central highlands, including the Hindu Kush mountain range, separate the two.

Afghanistan has a humid continental climate (hot summers and cold winters). The winters in the central and northeastern highlands of Afghanistan are very cold and harsh.

The average temperature in January drops below 15 degrees Celsius below zero. On the other hand, the low-lying areas of the southwest (Sistan Basin), the Jalalabad region in the east, and the plains of Turkestan along the Amu Darya River in the north have hot summers and their average temperature reaches more than 35 degrees in July.

The Hindu Kush Mountains in northeastern Afghanistan are geologically active.

30 thoughts on “Flag of the Islamic Republic of Afghanistan”

Mon Jun 7 , 2021
The Bisexual Pride Flag, first unveiled on December 5, 1998, was designed by Michael Page to increase the representation and visibility of bisexuals in the LGBT community and society at large. The rectangular flag consists of a wide magenta stripe at the top, a wide blue stripe at the bottom, […] 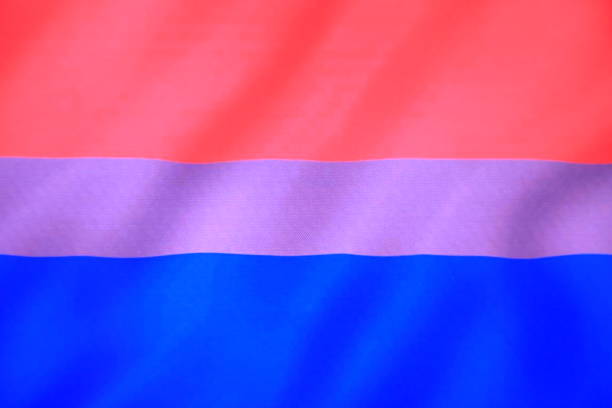